Originally published at: You Wouldn't Base64 a Password! on the Paragon Initiative Enterprises blog

There's a ton of bad programming and security advice on the Internet. Some of the advice is bad because the author is misinformed, some because it emphasizes precision over clarity and most people wind up lost in the jargon.

If you feel that cryptography is a weird, complicated, and slightly intimidating subject for which your feelings might be best described as lukewarm (on a good day), we hope that by the time you finish reading this page, you will have a clear understanding of the terms and concepts people use when this topic comes up.

Warning: The example snippets on this page are for illustrative purposes. Don't use them in your projects. If you want a real-world example to reference, check out the snippets in our Chief Development Officer's StackOverflow answer instead.

Digging a little deeper: there are a plethora of cryptography algorithms and they can generally be grouped together based on two criteria:

The First Rule of Cryptography: Don't Implement it Yourself

Developing cryptography features is best left to the experts. By all means, do feel free to tinker, but don't deploy your experiments in production or share them with other developers who might deploy them in production.

The simplest algorithm to consider is the cryptographic hash function, which accepts one input and returns a single deterministic fixed-size output.

When using a well-designed cryptographic hash function, such as BLAKE2 or SHA256, any change you make to the message will result in a drastically different hash output.

Simple hash functions are fast and deterministic; if you have any arbitrary message, you can calculate the hash output for that particular message. By themselves, they are mostly useful for error checking or as a building block for other cryptographic primitives, which most developers will not need to develop.

Cryptographic hash functions are one-way data transformations. Although you can easily calculate the hash output (often referred to as a message digest) for any arbitrary message, you cannot easily go from the hash output to the original message.

Some hash functions (such as MD5) have weaker security guarantees and smaller output sizes. As a result, it's almost trivial to calculate two different messages that will produce the same MD5 hash.

Most cryptography algorithms aren't as simple as hash functions. As a consequence, they are a lot more useful and can provide security guarantees beyond, "Yes, this output can be reproduced from this input."

Consequently, they typically require two pieces of input: The message and a secret key. A secret key should be a unique string of random bytes that both the sender and intended recipient should know, and nobody else.

A keyed hash function, such as HMAC, is a special implementation of a hash function that accepts a message and a secret key and produces a Message Authentication Code (MAC).

Formally, encryption is the reversible process of transforming of a message (called the plaintext) and a secret key into a seemingly random string of bytes (called the ciphertext). i.e. encrypt($message, $key) should return a unique string of random bytes for a given pair of $message and $key.

Unfortunately, simple secret-key encryption (also known as ECB mode) is not secure. If you encrypt the same (16-byte, for the popular AES encryption algorithm) block within a message with the same key in ECB mode, the ciphertext will repeat.

Modern secret-key encryption, therefore, actually accepts more than two pieces of information. Beyond the plaintext message and a secret key, they also require a unique Initialization Vector (IV, for CBC mode) or nonce (number to be used once, for CTR mode). The difference between a nonce and IV is subtle.

None of the code on this page is secure; neither are any of the encryption keys.

For a closer examination at symmetric-key encryption with OpenSSL, read our white paper.

Decryption is only successful if the same IV/nonce and secret key are used. However, only the key must be kept secret; the IV and nonce can even be broadcast with your encrypted message.

If you recall from our earlier blog post, Using Encryption and Authentication Correctly, secret-key encryption itself is vulnerable to tampering unless you combine it with authentication.

The only strategies proven to be secure are to use an AEAD mode or to always encrypt first then authenticate the encrypted data with a MAC.

If you are following an Encrypt-Then-MAC construction, you want to use two separate secret keys: One for the encryption, the other for the MAC. In other words, apply the previous two sections together:

It is important to exercise caution when combining cryptographic features. Our basic protocol as written above has no redundant features:

It should go without saying, but double-encrypting or double-authenticating when you need authenticated encryption would just be silly. 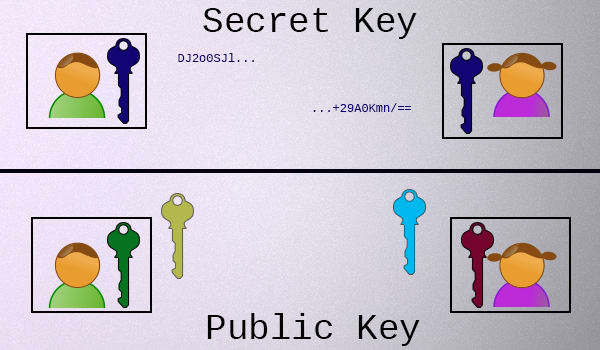 Here's all you need to know right now: Unlike secret key encryption, which involves a single secret key that is held by both parties, in public key cryptography, each participant has two keys:

For everyone else, if you can accept these premises, understanding the rest isn't hard:

Got it? Let's build something with this understanding.

Let's say you want to talk to a friend over the Internet using secret key cryptography (which is much faster than public key cryptography), but you don't want anyone else to read it. You and her haven't already agreed upon a secret key. How do you do it?

Glossing over the finer details (the color video above explains it fairly well), this is what you do:

Digital signature algorithms, such as EdDSA (Edwards-curve Digital Signature Algorithm), are one of the most useful innovations to result from public key cryptography.

A digital signature is calculated from a message and a private key. Earlier algorithms (such as ECDSA) also required you to generate a unique random nonce for each message, but this was proven to be error-prone in the real world.

Anyone else with a copy of your public key can verify that a particular message was signed by your private key. Unlike keyed hash functions, this verification takes place without requiring you to reveal your private key.

Quick answer: Just use bcrypt. For PHP developers, this means password_hash() and password_verify() rather than crypt().

Many developers think passwords should be encrypted, but this is false. Passwords should be *hashed*, not encrypted. Furthermore, don't confuse password hashing algorithms with simple cryptographic hash functions. They're not the same thing:

Unlike cryptographic hashes, password hashes require more than one input parameter. But unlike encryption algorithms, password hashes are one-way deterministic trap door calculations. Also unlike secret-key encryption, the salt does not need to remain secret; it merely needs to be unique per user. The purpose of a unique salt per user is to thwart pre-computation and to make brute-force guessing passwords from a list of hashes more expensive.

Yes. If you run your web application and your database on separate hardware servers, this actually provides a substantial defense in depth. That's the reasoning behind our password_lock library.

Digital signatures can prove authenticity, cryptographic hash functions can not.

There is a nontrivial portion of technical users that will, upon downloading an executable from a website, recalculate the MD5 or SHA1 hash of the file and compare it to one displayed on the web page they downloaded the file from. If it matches, they will execute the file, fully trusting its contents to be genuine.

If both the file and the hash value are stored on the same server, this is a completely ludicrous waste of time: Any attacker who can alter your download can replace the hashes on the web page too. (If the file and hash are on separate servers, the situation is a little different, but the improvement is not significant enough to warrant eschewing a better solution.)

After all, as we said above, hash functions like MD5 and SHA1 produce a deterministic fixed-size output for a given input. There are no secrets involved. When a solution does not increase security but makes people feel more secure, we call them security theater.

Cryptographic hash functions are security theater in this situation. You want digital signatures instead.

To improve security, instead of posting MD5/SHA1 hashes, the software vendor can instead sign their package with their EdDSA private key and share their EdDSA public key far and wide. When you download the file, you should also download the signature and, using the verified public key, check that it is authentic.

A keyed hash function won't work here either, as you would need to distribute the secret key in order for anyone to be able to verify the signature. If they have the secret key, they can forge their own signatures for maliciously altered message (in this case, executable file).

Digital signatures are the best way to achieve assurance about the authenticity of a download. MD5/SHA1 hashes are almost always useless here.

A common beginner's mistake is to use an encoding function, such as base64_encode(), to attempt to obfuscate information. Consider the following code, which was offered in a LinkedIn discussion about how to properly store passwords in a PHP web application: 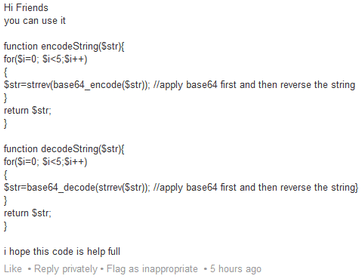 This may very well be the worst password storage function ever written.

A lot of developers will either encode or compress information and assume their solution provides the same level of security as actual cryptographic features simply because the output is not human readable. It doesn't.

Encoding and compression algorithms are both reversible, keyless transformations of information. Encoding specifies how information should be represented in human-readable text. Compression attempts to reduce an input to as little space as possible. Both are useful, but they are not cryptographic features.

We hope that this post serves as a good introduction to cryptography concepts. Our team publishes new posts about cryptography, application security, and web development in PHP anywhere from 2 to 5 times per month (usually on Friday). We also offer code review and technology consulting services.

Adding A Virtual Machine To An Existing Availability sets On Azure

JS Errors in the Console, with a twist

Once suspended, paragonie will not be able to comment or publish posts until their suspension is removed.

Once unsuspended, paragonie will be able to comment and publish posts again.

Once unpublished, all posts by paragonie will become hidden and only accessible to themselves.

If paragonie is not suspended, they can still re-publish their posts from their dashboard.

Once unpublished, this post will become invisible to the public and only accessible to Scott Arciszewski.

Thanks for keeping DEV Community 👩‍💻👨‍💻 safe. Here is what you can do to flag paragonie:

Unflagging paragonie will restore default visibility to their posts.