If someone who is not in the tech industry (a Muggle 😆) asks you what JavaScript is, could you define it? Well, you could say something like this:

"Javascript is an asynchronous, single-threaded and non-blocking language which uses some tools like a call stack, an event loop, a callback queue and some other APIs for concurrency".

That sounds like a dangerous spell in Harry Potter that would send your enemy straight to hell, doesn't it? But don't worry, I don't like when people use some complicated words to say barely nothing either. So let's go through each of those bizarre words.

Easy Peasy, isn't it 😌?! NO?! Alright, I admit, that's a lot of words. So let's see a straightforward example to explain all of this.

Let's admit we're in a restaurant where some orders are already cooked and are quick to serve by the waitress, and some other are harder to make and are going to take time to be cooked by the chef (the "slow" tasks I was talking about 😉). We imagine that whatever the chef cooks, he puts it on his big table for the waitress to take it (It's my article, I do what i want, okay? 😒) 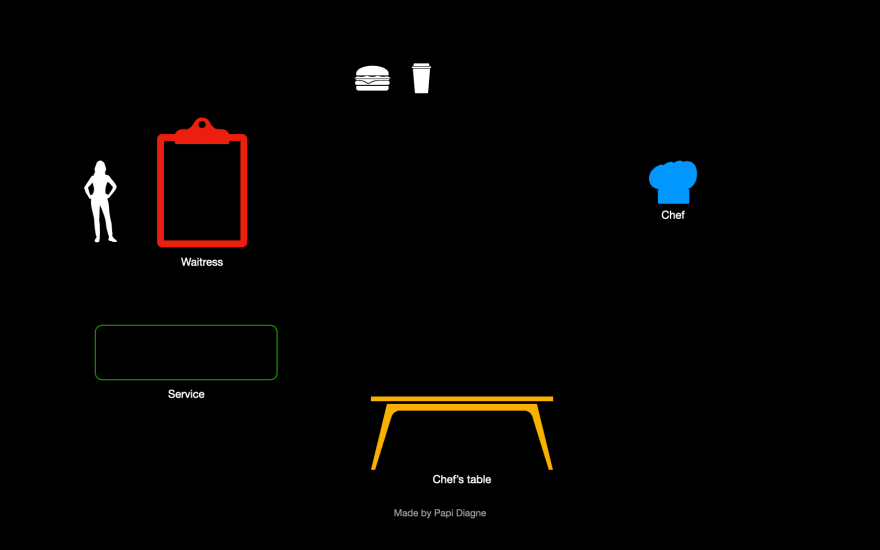 We can notice that the next order is a slow order. So the waitress gives it to the chef who cooks it, and puts the bowl of cooked salad on his table, for the waitress to serve it later.

Meanwhile, the waitress takes care of the next order (a cup of juice) which is quick, and serves it to the client 4 (he's quite hungry 😅)

When it's done, the waitress notices that her list is empty. So she checks the chef's table to see if there is any meal on it.

If so, she takes that meal, and serves it the corresponding client (in this case, she serves a delicious bowl of salad the client 3)

Her list being still empty, she checks the chef's table once again and see's that there's nothing on it. Thus, she can clock out and go home 🎉.

That's it!! That's how JavaScript works. You still can't make the connection between the example and the weird words above 😩? Alright, let's see, with the same animation, how the following code is going to be executed.

First of all, let's place our weird words to where they belong in the animation 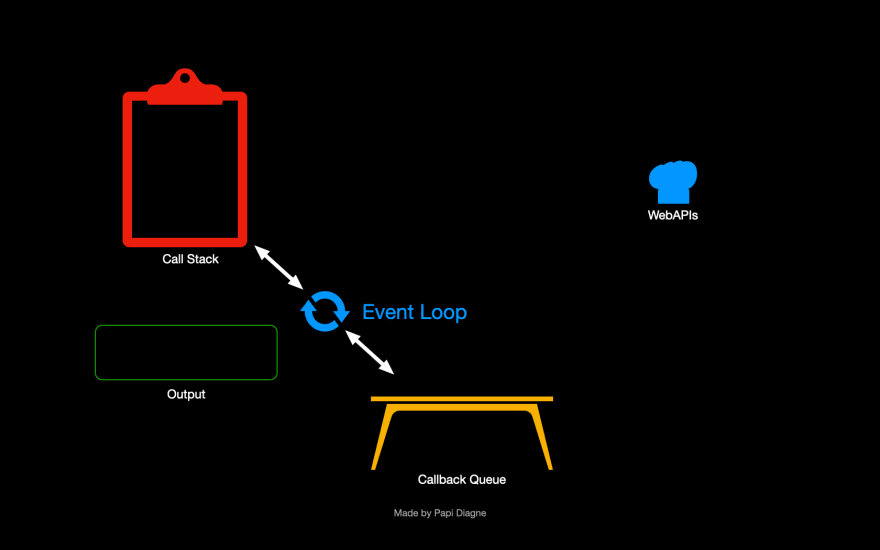 Now let's see how it works

See? It's not that complicated, right?

I hope this article helped you understand better the famous event loop and made you feel better with javascript. It is fundamental to understand these concepts in order to avoid some strange behaviors when you write asynchronous functions. If it still seems confusing to you, I recommend this excellent video of Philip Roberts explaining it:

Feel free to reach out to me if you have any questions: