Somewhere in the middle of our previous article about the pros and cons of React Native and Xamarin, I promised to deliver another comparison at the end of the week. And here it is – React Native vs NativeScript comparison.

What is cross-platform development?

Cross-platform development is a way to build mobile applications from single codebase instead of creating separate applications for specific operating systems. Applications made that way are native-like and have several advantages over native applications, like:

If you want to learn more about the differences between cross-platform apps and native apps, we recommend our article on this subject.

The next step is to choose the proper framework for your mobile application. Among them are:

Although our first choice is React Native, we want you to make well thought out decisions about the framework. Because of that, we prepared a few comparisons between React Native and other frameworks:

Facebook created React Native as an open-source framework based on JavaScript. With RN, you can build native mobile applications for both Android and iOS.

If you want to learn more about React Native, we recommend reading our React Native Guide.

NativeScript, as same as React Native, is an open-source framework that helps developers build apps on the Android and iOS platforms. NativeScript apps are created with JavaScript or by any other JavaScript-related language like TypeScript. NS also supports frameworks like Angular and Vue.js.

NativeScript allows for direct access to all native platform APIs on both iOS and Android. Thanks to it, you can build fully native apps like they were developed in Xcode or Android Studio.

If your mobile application will consist of complex business logic, then you should go with React Native, because the application size will be compact. On the contrary, complex mobile apps built with NativeScript are usually of considerable size. And keep in mind that high-speed internet connection isn’t available everywhere, which may cause terrible experience from using such an app.

The general rule is that the more complex and custom the application is, the smaller the possibility of sharing codebase. However, React Native, and NativeScript applications can share up to 90% of the code.

There is also one crucial factor that influences the code-sharing percentage – the number of used native-platform components. The bigger that number is, the smallest part of the code can be shared.

If it were a popularity contest, React Native would win indisputably. The main reason is that the Facebook developers are behind RN, and they are wildly popular around the programming world. Just take a look at numbers from GitHub, Google Trends, StackOverflow, and Stackshare. 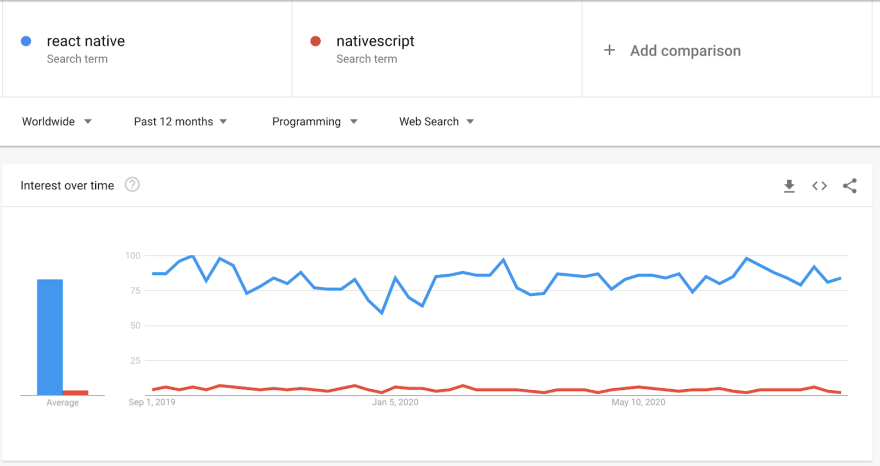 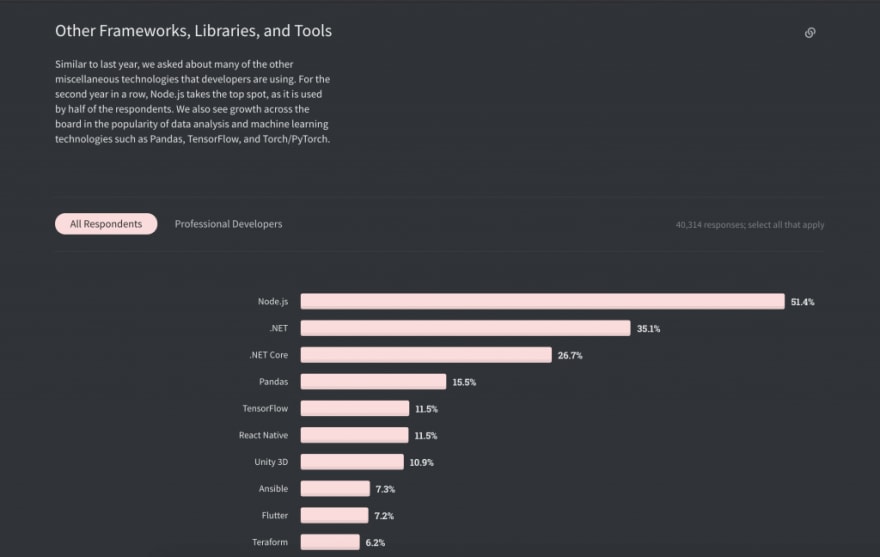 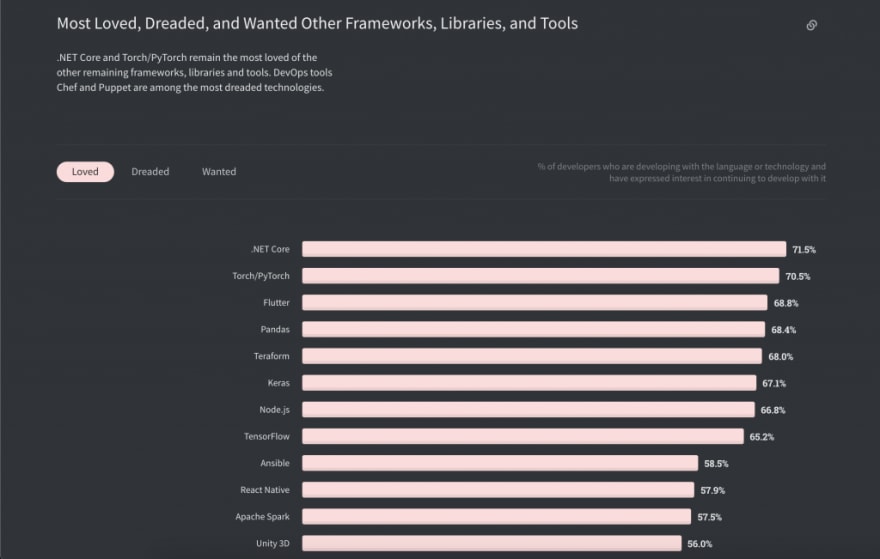 All these numbers mean that if you choose React Native to build a mobile app, it will be easier to:

There is no IDE (integrated development environment) explicitly created for React Native development. Because of that, you can use your favourite code editor. And while it’s great news, you should remember that you are on your own when it comes to setting up everything.

NativeScript makes it easy to set up the environment – everything you need is a single line of code. Moreover, there is a special debugging plugin for those who use Visual Studio Code. As a developer, you can use it for variable inspection, breakpoints and other everyday tasks.

Both frameworks, however, allow developers to use Chrome Developer Tools for debugging.

Both platforms take advantage of JavaScript, so it’s a piece of excellent news for frontend developers. And both are perceived as relatively easy to learn.

However, there are some differences.

On the one hand, choosing React Native means that all you need is JavaScript. And on the other hand, NativeScript gives you more freedom by supporting the declarative coding style. It means that if you are not happy with a specific feature in one framework, you can use any other JavaScript framework, including Angular, TypeScript, and Vue.js.

Developers using NativeScript have direct access to native APIs both for Android and iOS without writing code in Kotlin/Java (for Android) or Objective-C/Swift (for iOS) languages.

While React Native connects with native APIs like NativeScript, it needs the help of special bridges. And that’s the reason why you may need some native language knowledge. Integrating such bridges – even though there are some readymade bridges provided by developers – still requires some amount of effort.

NativeScript offers slow rendering and In the world where every second count, it’s something hard to accept. And that’s where React Native enters the stage. Rendering dynamic elements, which looks like rendering in apps using native SDKs, is possible thanks to the Virtual DOM. DOM makes React Native performant and helps overhaul NativeScript in this case.

NativeScript offers Marketplace where you can find any plugins you may need. Because of that, third-party solutions aren’t required. On the other side, React Native relies on third-party plugins, but there are many resources available, and generally, it isn’t a problem to find what you need.

A Tutorial using Hasura with Draftbit, a low-code tool for building mobile apps

How to Change Application Name and Launcher Icon in Flutter.