A drop of musical taste from every contributor...


Welcome to the developer's collaborative playlist.

I spend most of my free time with coding and I need fairy of inspiration during these times of intense thinking.

Focusing on the same issue for a long time can be very tiring sometimes. Especially if the target problem doesn't have a single solution.

Every time I feel burnout, I want to take my mind on different adventures. And often the easiest way to start such an adventure is with a 'Shuffle Play' button.

The same algorithm can be written differently by each developer. The developer's code style becomes their signature.

So the question in my mind was:

Coding is an art, so what do artists listen to while performing this art?

I thought it might be a pretty fun and elegant way to answer: creating a developers' collaborative playlist, all automated using GitHub Actions.

How I created the workflow?

If I could, I would like to automate everything in this life. I may never be able to automate dealing with people, but this project has been a good medicine for my automatization addiction.

First I had to overcome some problems before reaching my final goal:

Let's be honest, Spotify has pretty good API documentation. But things can get complicated as you get involved.

In this scenario, the string itself would of course be GitHub Actions.

In order for the developers to make a song request, they should open an issue with the title 'song request' and the body of the issue should have a text in - format.

Thus, it was necessary to correctly evaluate the issues opened by the users and to produce the necessary actions accordingly.

In this process, I explored the unlimited features of GitHub Actions and had to use many features from if-checks to environment variables.

Therefore I did it. do i regret it? No. Was that wacky? Maybe.

It was a good idea to view the songs added by each user. Until you try to code it.

GitHub Actions does not keep any persistent data by nature. So I had to overcome this nature and keep contributors' information: 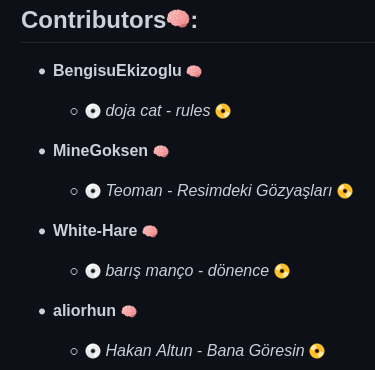 I created files for every single contributor. Each time a new song was added, these files and the README_template would be concatenated and a new README file would be created. At this point, I used the code push feature to the target repository, which is readily available in the GitHub Actions marketplace.

If the input of the developed tool is controlled by the users, errors are inevitable.

In this scenario, developers are expected to adhere to certain formats when requesting songs. For this reason, all wrong entries need to be handled properly.

For example, in case of a wrong issue title or when the searched song is not found, an appropriate answer should be returned and the developer should be informed.

I will continue to improve this part after the contest ends. For example, now the same song can be added to the playlist multiple times. While I initially thought this was logical because popular songs were included more, I think it should be fixed in the future. I'm also considering making a custom super cool website reserved for my lovely contributors 🤩

I can say that most of the time of the project I developed was spent managing the inputs. I think user experience is very important at this point. Also a big kudos to everyone who has added their favorite songs on the GitHub repository and gave a feedback to me, thus contributing to an open source project!

Frankly, without GitHub Actions, this project would not have been easy to realize and popularize among developers.

In this process, I also had the opportunity to explore and use many ready-made works in the GitHub Actions market:

Here is the repository:

A drop of musical taste from every contributor... Welcome to the developer's collaborative playlist.

A drop of musical taste from every contributor... Welcome to the developers' collaborative playlist. 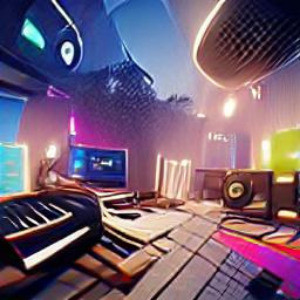 The same algorithm can be written differently by each developer. The developer's code style becomes their signature.

Coding is an art, so what do artists listen to while performing this art?

You can also view the YAML file: devs_playlist_action.yaml 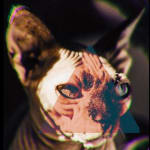 Im sure that we are living in a simulation.

About the cover image:
Cover image is created with AI. Only using the text: "Developers Playlist"

It's the song request time!

Let's open an issue with your favorite song and enjoy the Developers' Favorite Playlist!

Solana: Concerns and Integration To OpenSea

oz9un
Im sure that we are living in a simulation.
🎉 After 2 years I finally finished my portfolio🎉
#javascript #react #career #showdev
What was your win this week?
#discuss #weeklyretro
Launching the State of the Appwrite Community Survey
#appwrite #community #feedback #opensource