Some of the popular languages used for web scraping are Python, JavaScript with Node.js, PHP, Java, C#, and many others. Every language has its strengths and weaknesses. For now, let’s focus on web scraping with Java.

There are two most commonly used libraries for web scraping with Java— JSoup and HtmlUnit.

JSoup is a powerful library that can effectively handle malformed HTML. The name of this library comes from the phrase “tag soup”, which refers to the malformed HTML document.

HtmlUnit is a GUI-less, or headless, browser for Java programs. It can emulate the key aspects of a browser, such as getting specific elements from a page, clicking the elements, etc. As the name of this library suggests, it is commonly used for unit testing. It is a way to simulate a browser for testing purposes.

Prerequisites for building a web scraper with Java

This tutorial assumes that you are familiar with the Java programming language. For managing packages, we will be using Maven.

Apart from Java basics, a primary understanding of how websites work is also expected. Good knowledge of HTML and selecting elements, either by using XPath or CSS selectors, would also be required. Note that not all libraries support XPath.

Now let’s review the libraries that can be used for web scraping with Java.

The first step is to get the Java libraries. Maven can help here. Use any Java IDE and create a Maven project. If you do not want to use Maven, head over to this page to find alternate downloads.

In the pom.xml (Project Object Model) file, add a new section for dependencies and add a dependency for JSoup. The pom.xml file would look something like this:

With this, we are ready to create a Java scraper.

Getting and parsing the HTML

The second step is to get the HTML from the target URL and parse it into a Java object. Let’s begin with the imports:

Note that it is not a good practice to import everything with a wildcard – import org.jsoup.*. Always import exactly what you need. The above imports are what we are going to use in this tutorial.

JSoup provides the connect function. This function takes the URL and returns a Document. Here is how you can get the page’s HTML:

You will often see this line in places, but it has a disadvantage. This shortcut does not have any error handling. A better approach would be to create a function. This function takes a URL as a parameter. First, it creates a connection and then stores it in a variable. After that, the get() method of the connection object is called to retrieve the HTML document. This document is returned as an instance of the Document class. The get() method can throw an IOException, which needs to be handled.

In some instances, you would need to pass a custom user agent. This can be done by sending the user agent string to the userAgent() function before calling the get() function:

This action should resolve all the common problems.

The most crucial step of any Java web scraper building process is to query the HTML Document object for the desired data. This is the point where you will be spending most of your time.

JSoup supports many ways to extract the desired elements. There are many methods, such as getElementByID, getElementsByTag, etc., that make it easier to query the DOM.

Here is an example of navigating to the JSoup page on Wikipedia. Right-click the heading and select Inspect, thus opening the developer tools with the heading selected. 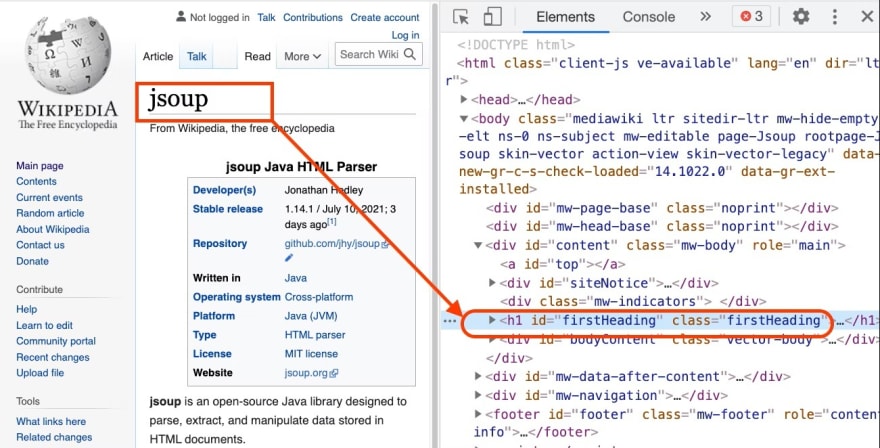 Conveniently, this library has a class Elements that extends ArrayList<Element>. This makes code cleaner and provides more functionality.

These functions are good; however, they are specific to JSoup. For most cases, the select function can be a better choice. The only case when select functions will not work is when you need to traverse up the document. In these cases, you may want to use parent(), children(), and child(). For a complete list of all the available methods, visit this page.

The following code demonstrates how to use the selectFirst() method, which returns the first match:

In this example, selectFirst() method is used. If multiple elements need to be selected, you can use the select() method. This will take the CSS selector as a parameter and return an instance of Elements, which is an extension of the ArrayList<Element> type.

There are many methods to read and modify the loaded page. HtmlUnit makes it easy to interact with a web page like a browser, which involves reading text, filling forms, clicking buttons, etc. In this case, we will be using methods from this library to read information from URLs.

As discussed in the previous section, there are three steps involved in web scraping with Java.

Getting and parsing the HTML

The first step is to get the Java libraries. Maven can help here. Create a new maven project or use the one created in the previous section. If you do not want to use Maven, head over to this page to find alternate downloads.

The second step of web scraping with Java is to retrieve the HTML from the target URL as a Java object. Let’s begin with the imports:

As discussed in the previous section, it is not a good practice to do a wildcard import such as import com.gargoylesoftware.htmlunit.html.*. Import only what you need. The above imports are what we are going to use in this Java web scraping tutorial.

In this example, we will scrape this Librivox page.

HtmlUnit uses the WebClient class to get the page. The first step is to create an instance of this class. In this example, there is no need for CSS rendering, and there is no use of JavaScript as well. We can set the options to disable these two:

Note that the getPage() functions can throw IOException. You would need to surround it in a try-catch.

Here is an implementation example of a function that returns an instance of HtmlPage:

The second category of a selector uses XPath. Navigate to this page, right-click the book title and click Inspect. If you are already comfortable with XPath, you should be able to see that the XPath to select the book title would be //div[@class="content-wrap clearfix"]/h1.

There are two methods that can work with XPath — getByXPath() and getFirstByXPath(). They return HtmlElement instead of DomElement. Note that special characters like quotation marks will need to be escaped using a backslash:

Lastly, the third category of methods uses CSS selectors. These methods are querySelector() and querySelectorAll(). They return DomNode and DomNodeList<DomNode> respectively.

To make this Java web scraper tutorial more realistic, let’s print all the chapter names, reader names, and duration from the page. The first step is to determine the selector that can select all rows. Next, we will use the querySelectorAll() method to select all the rows. Finally, we will run a loop on all the rows and call querySelector() to extract the content of each cell.

Almost every business needs web scraping to analyze data and stay competitive in the market. Knowing the basics of web scraping and how to build a web scraper using Java can result in more informed and quick decisions, which are essential for a business to succeed.

Once suspended, oxylabs-io will not be able to comment or publish posts until their suspension is removed.

Once unsuspended, oxylabs-io will be able to comment and publish posts again.

Once unpublished, all posts by oxylabs-io will become hidden and only accessible to themselves.

If oxylabs-io is not suspended, they can still re-publish their posts from their dashboard.

Once unpublished, this post will become invisible to the public and only accessible to Oxylabs.

Thanks for keeping DEV Community 👩‍💻👨‍💻 safe. Here is what you can do to flag oxylabs-io:

Unflagging oxylabs-io will restore default visibility to their posts.