What is a Wrapped Token?

Wrapped cryptocurrencies or tokens are pegged to the value of another original crypto or assets like gold, stocks, shares, and real estate and put to work on the DeFi platforms.

They are a special type of ERC20 tokens, which typically prefix their token symbol with "W". For example, RBTC is the native cryptocurrency on the RSK Blockchain and WRBTC is an ERC20 token that wraps RBTC. This not only enables the RBTC denominated DeFi activity on DeFi platforms (which standardises on the ERC20 standard) but also consequently enables it to be used on other blockchain networks.

The original asset is 'wrapped' into a digital vault, and a newly minted token is created to transact on other platforms. Wrapped tokens allow non-native assets to be used on any blockchain, build bridges between networks and implement interoperability in the cryptocurrency space.

How do they work?

Difference between a wrapped vs an unwrapped token 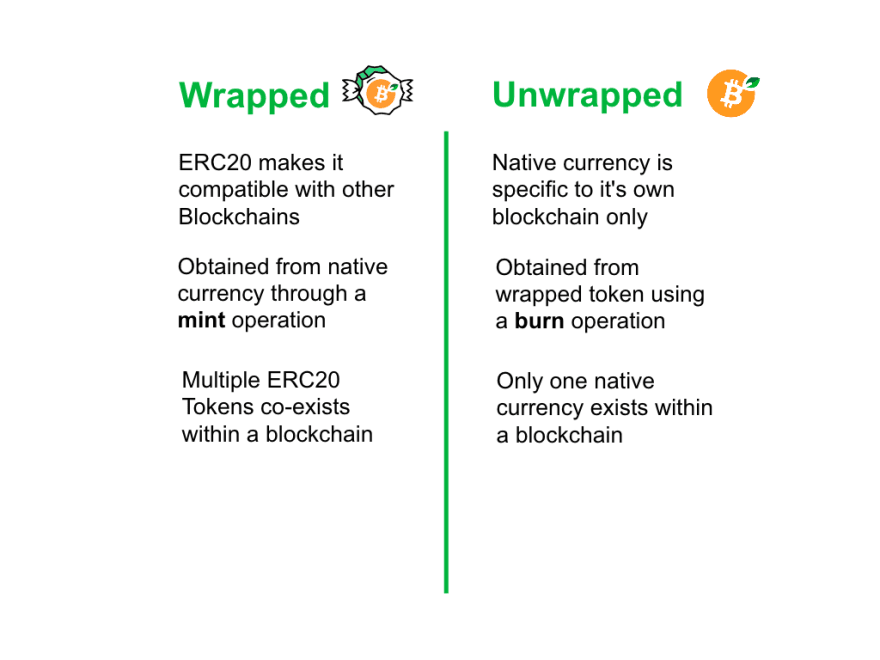 BTC is the native currency of the Bitcoin network.

WRBTC is an ERC20 token that wraps RBTC. Both are on the same network, RSK. This is accomplished using a smart contract. See WRBTC on the RSK block explorer.

WBTC is an ERC20 token on the Ethereum network that is treated like wrapped BTC. However is not accomplished using smart contracts, and instead requires trust in an intermediary.

All four of these assets have equivalent value, they simply exist in different formats and on different blockchain networks.

Trade Directly with other Tokens
The reason you need WRBTC is to be able to trade RBTC for other ERC-20 tokens on decentralized platforms. Because decentralized platforms running on RSK use smart contracts to facilitate trades directly between users, every user needs to have the same standardized format for every token they trade. This ensures tokens don't get lost in translation.

No wrapping is done
When you "wrap" RBTC, you are trading via a smart contract for a token of equal value called WRBTC. If you want to get native RBTC back you need to "unwrap" it, via the same smart contract.

Other Benefits of using wrapped tokens?

Faster
The RSK blockchain processes transactions faster than the Bitcoin network. With RBTC and WRBTC, it's possible to use your BTC reserves on the RSK platform, conducting transactions faster.
Watch how to get RBTC using Sovryn and Liquality.

Promotes Interoperability
One reason for this is that ERC20 tokens all have a standard interface. The method to transfer ERC20 tokens is the same for any tokens that follow that standard. Every blockchain is different and enforces its own standards, meaning many tokens cannot be used across other chains. Wrapped tokens allow for non-native tokens to be used on other blockchains.

Increased Liquidity
There is only one cryptocurrency per blockchain network. RSK only has RBTC, and Ethereum only has Ether.

However, DeFi protocols want to be able to trade and perform other operations using multiple tokens, not just one. Combine that with token bridges that enable tokens to cross from one blockchain network to another. Combine all of this together and you get the ability to have Wrapped RBTC, Wrapped Ether, RDOC, and rUSDT all available on a single DeFi platform, which is pretty amazing!
Wrapped tokens increase liquidity and capital efficiency for exchanges, as they offer their users greater trading options.

Where to Get Wrapped RBTC (WRBTC)?

To acquire wrapped RBTC, you can wrap your own RBTC by finding a WRBTC merchant such as RSKSwap. The merchant sends your BTC to a smart contract that mints the WRBTC wrapped token at a 1:1 ratio and stores your deposited BTC. When you want to redeem your WRBTC for bitcoin, the merchant will send a burn request to the custodian who will then destroy the WRBTC and return your RBTC back to you.
For the more technically savvy, you can even perform the exact operations described above by interacting directly with the WRBTC smart contract.

If you have BTC on the Bitcoin network, you may wish to convert it to RBTC on the RSK network. Watch this explainer video below or read about the RBTC Conversion on RSK Developers Portal.

For converting RBTC to BTC and vice versa, you can check out the guide here: RBTC Conversion or watch this explainer video

If you fail, never give up!

Once suspended, owans will not be able to comment or publish posts until their suspension is removed.

Once unsuspended, owans will be able to comment and publish posts again.

Once unpublished, all posts by owans will become hidden and only accessible to themselves.

If owans is not suspended, they can still re-publish their posts from their dashboard.

Once unpublished, this post will become invisible to the public and only accessible to Owanate Amachree.

Thanks for keeping DEV Community safe. Here is what you can do to flag owans:

Unflagging owans will restore default visibility to their posts.