Here is a little tool I created to solve one of problems. I have worked in different companies as a software tech lead. In the projects where I worked, keeping track of the status of the software was tricky. 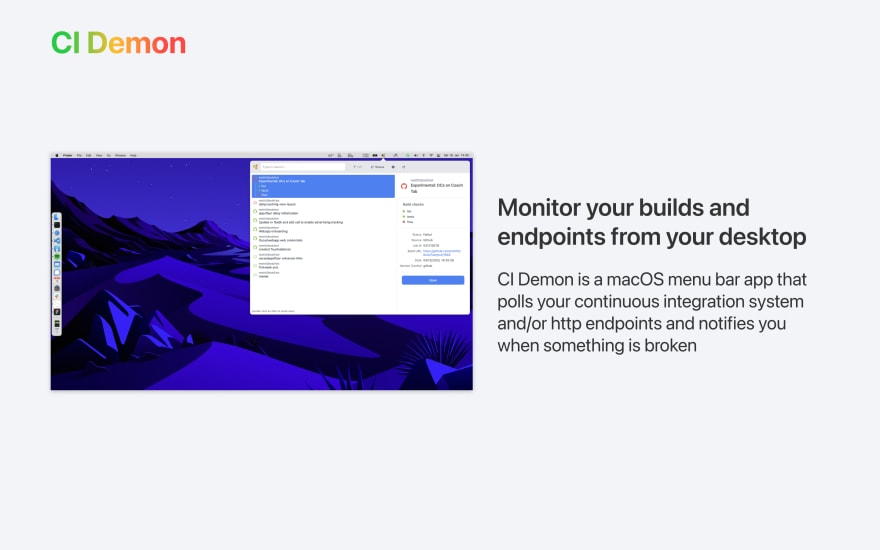 Once you have decent amount of team members and your software starts to mature, keeping track of what is broken becomes vital. You want to quickly get notified when a branch might be in a broken state or when a deployment fails.

Previously I had been using CCMenu, it adds a small icon on your macOS status bar that turns red whenever there is a broken branch. However, it came with a lot of limitations, it was a super simple tool, despite the complexity of the task it tries to solve. Therefore I came up with CI Demon, it basically takes the same idea as CCMenu (to put the status of your CI in your desktop) but expands it by offering a more complete solution.

It not only shows the status of your main project branch, but also all the branches (or even PRs), it shows additional info, like on which step the build failed. It integrates with each service API so it provides more detailed information. It can trigger a rebuild. You can also quickly share a failing branch directly from the app, and the list goes on.

People who use it, are super happy with it, it is a fairly niche tool, but I know it solves a problem; observability. Having a dedicated tool for the job will always trump integration with other tools (like slack messages, which quickly get lost).

Give it a try! I promise you won't be disappointed.

Ensure your Next.js app's performance is top-notch with Lighthouse CI and GitHub Actions

Once suspended, ospfranco will not be able to comment or publish posts until their suspension is removed.

Once unsuspended, ospfranco will be able to comment and publish posts again.

Once unpublished, all posts by ospfranco will become hidden and only accessible to themselves.

If ospfranco is not suspended, they can still re-publish their posts from their dashboard.

Once unpublished, this post will become invisible to the public and only accessible to Oscar Franco.

Thanks for keeping DEV Community 👩‍💻👨‍💻 safe. Here is what you can do to flag ospfranco:

Unflagging ospfranco will restore default visibility to their posts.