PREFACE: I want to point out that in writing this article by saying, I'm not trying to be vindictive or to spite, but to draw attention to how not to behave as an open source developer.

The only real option

Recently, I've been working on an app in React Native, in which I needed to write a share extension in iOS and Android. Like any good developer, I'm aware that I'm standing on the shoulders of giants, and in all likelihood, someone had the same problem and solved it, well before I came along. So, after an afternoon Googling for a solution, it became apparent the only real working solution for React Native share extensions was a library (in a case of extreme nominative determinism) aptly called react-native-share-extension.

The only problem is that this lib seems to have been abandoned. The maintainer has long since stopped maintaining the package and it's accumulating issues at a fair lick, with reports of it breaking in the latest version (0.6.2 at time of writing) of React Native.

At first as you look through the issues, you see lots of people replying, reporting similar experiences, trying to help, offering solutions, or in some cases, recommending other libraries. Like this helpful comment:

Initially, I thought this might be useful: 'this is just being helpful', and I checked it the repo, but soon I realised his solution doesn't really do what I need it to. So I'm looking at other issues, trying to gauge if this is really the lib I want to use. And it's then that I started seeing a worrying pattern...

So spammy I could make a sandwich

It becomes apparent spanning back over the course of at least a year, this poor fellow, desperate to drive traffic to his React Native library, has taken the time to spam 10, 20, 30 issues, ostensibly promoting a solution to their woes, where really he's just trying to put forward his own solution:

Things on a list that annoy me: hypocrisy, deceitfulness, and bare-faced and brazen manipulation -- especially in a time of fake news. I don't have time, (and others shouldn't waste their time) on the lazy and feckless.

So, I decided to take this guy to task by opening an issue on his lib's Github repo: 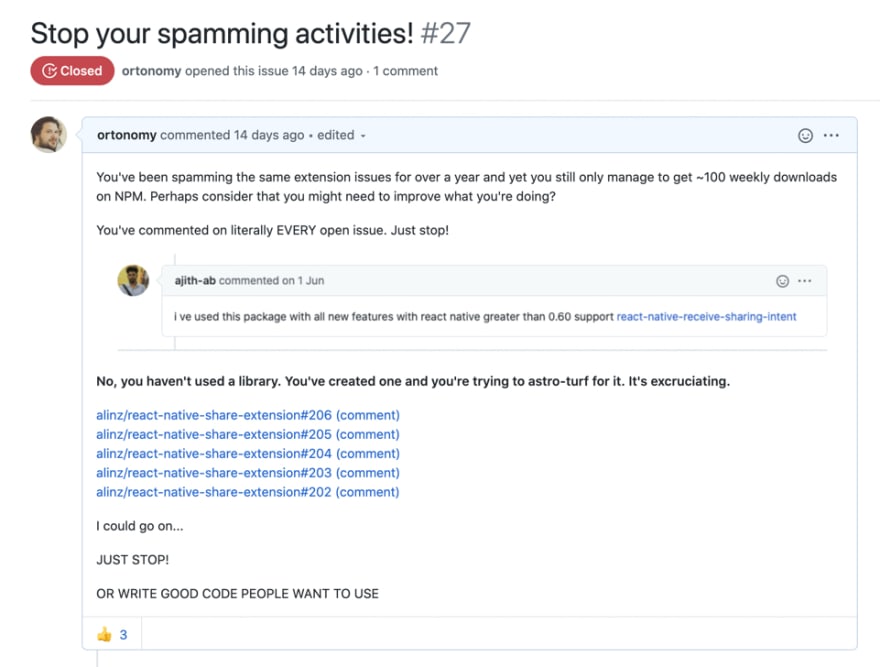 I wasn't going to sit by and allow this guy to mislead and misrepresent. It's just not how things should be done.

So, after some two weeks have passed, this guy hasn't responded to my issue, until today (2020-08-05) with what can only be described as pure chutzpah! Not only does he close the issue, he:

I guess I should give him credit for his willingness to commit to the charade, but damn!

Conclusion: Dont' be a dick

The point I'm trying to make here is that this is so weird. It's great that you want to create something open source and give it away for the world to enjoy -- this is a selfless act that is repeated every day and has given us some of history's greatest software (Linux anyone?).

But to seemingly be doing this to further you own interests, or to gain exposure, or for some perceived gains in professional status, and to self promote in such an opaque and clandestine way, spamming someone else's repo to take users, it's not really the sign of a professional who you'd want to work with. It makes me, and should make you, very wary about using their library.

You can see the offending package at https://github.com/ajith-ab/react-native-receive-sharing-intent/issues/27

Once suspended, ortonomy will not be able to comment or publish posts until their suspension is removed.

Once unsuspended, ortonomy will be able to comment and publish posts again.

Once unpublished, all posts by ortonomy will become hidden and only accessible to themselves.

If ortonomy is not suspended, they can still re-publish their posts from their dashboard.

Once unpublished, this post will become invisible to the public and only accessible to 🅖🅡🅔🅖🅞🅡🅨 🅞🅡🅣🅞🅝.

Thanks for keeping DEV Community 👩‍💻👨‍💻 safe. Here is what you can do to flag ortonomy:

Unflagging ortonomy will restore default visibility to their posts.