One of the things that has worked out for me while learning a new language or framework is to create a small app as soon as I have learned a few crucial concepts. What better way to learn than to apply concepts directly to a practical project? In my case, I learned about React Hooks and Contexts a few days ago. It took me a couple of days to get a grasp of the idea, but I managed to create my first React app on day 5 of learning React. In this blog post I will go into the details of the app and provide my favorite resources when it comes to learning React.

The app is a simple to-do list app, but I tried my best to expose myself to concepts that seem daunting to some (including myself) in the beginning. These were primarily Hooks and Contexts. By reading this blog post, I hope that you'll gain a deeper understanding of Hooks and Contexts and you'll have made your own custom hook (yay!). Check it out:

You've probably heard this term many times while learning React, and there's a reason for that. React hooks play a crucial part in almost every React app you'll create. That's why it is important to understand what they are. Let's take a look at the official React docs and see what React hooks are (link):

Hooks are functions that let you “hook into” React state and lifecycle features from function components. Hooks don’t work inside classes — they let you use React without classes.

Let's make sense of that. Before hooks, if you ever wanted to use states in your components, you needed to use classes. States are objects that hold information, when states are updated it forces the component to re-render. With hooks, you can now incorporate states within your functional components using useState().

So... what states will we need in the case of our to-do list app? The first question to think about is what are some things that you are storing/holding? What are the things, that when updated, you'd like the component to re-render? What first comes to mind is an array of tasks. A user should be able to write a task, click the add button and have the task appear in the table below. So, we'll need to use states to keep track of these tasks. A task object will have the following structure:

Where id is a unique identifier using v4() from the uuid library. We'll use this identifier when we want to refer to a specific task. For example, when a user wants to complete a task, it would be easier if we had a unique identifier for us to know which task the user is referring to.

A Primer on React Contexts

Before we start talking about React Contexts, it's important to understand the different approaches you can take when it comes to state management for this app.

One approach is to have the necessary states being handled by the component itself, for example, managing the state of tasks in the TaskList component. However, over time, this approach will result in states being all over the place, and in larger applications it will be more difficult to debug.

Another approach is to handle all states at the root of your app. That is, storing all possible states that your entire app needs to manage in the App component. You might think that this would solve the issue, however, let's say you have a Task component that takes care of displaying a single task. You also have a TaskList component that contains a bunch of Task components. When you complete a task, you must pass the new state backwards all the way to the root. That would mean that the state must be passed from Task to the TaskList to the App. Now think about what would happen if instead of a single stop in between, you had 5+ components. This nesting will result in a very inefficient way of passing state changes between components that don't even care about the change of the state. That means, when you complete a task, the TaskList doesn't care and doesn't need that information, the App needs it. There are probably other ways to manage states, but if you're still confused, this might clear it up: 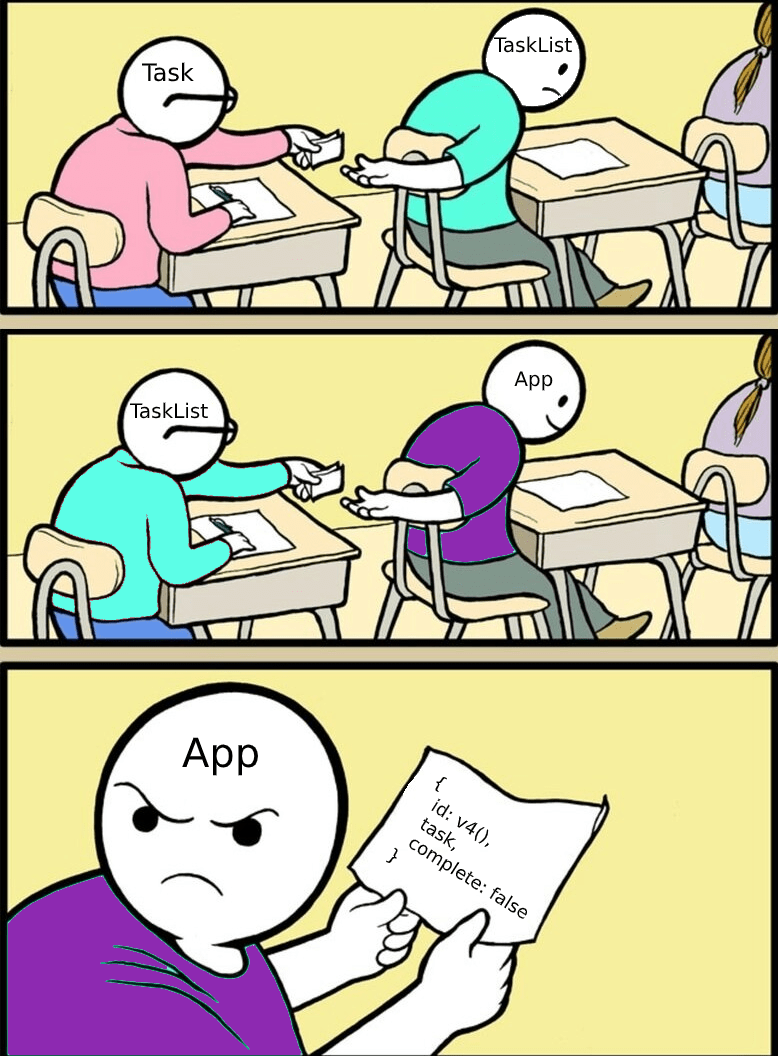 This is where contexts come in. You can setup a context provider and wrap it around your app or the part of the app that uses the to-do list. This context provider will let us have the best of both worlds. We will still store our states in a single location, but when passing data around, it doesn't need to pass through components that don't need this data. In this case, the Task component will be the context consumer as it will make use of this context provider to pass data directly to the root of the app. Visually, this is what's happening: 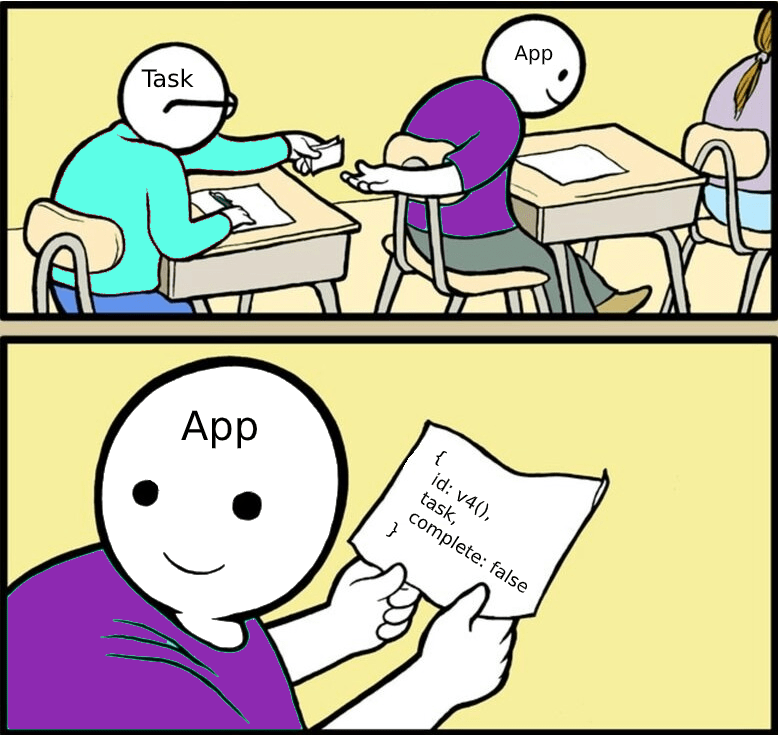 Now that you see the advantage of using React contexts, let's create our own context provider and a custom hook that allows us to communicate with that context. That way, the other components can pass data directly to the context without dealing with any intermediary components.

Writing our own Context Provider

I will first show you the code of our context provider (stored in TaskProvider.js), and then we can walk through what the code actually does:

Coding up our React Components

Let's start with the Task component (in the Task.js file):

Now let's create our TaskList component (in the TaskList.js file):

That is all for the components we need. Now we have to connect everything together to get a functional app.

Let's now use all of our components to connect everything together. In the App.js file we have the following:

The only other change we need to make is in the index.js file where we use the TaskProvider component we created to wrap the entire app in the context:

That's it, the app is now ready for testing, but first, let's add some styles!

Since this blog post focuses on the React aspect of this app, I will not be explaining the scss below, however feel free to reach out to me if something doesn't make sense. The only important thing to keep in mind is the .task-done class which sets text-decoration to line-through to get the strike-through effect. Here is the code for styles (in the Todo.scss file)

After this long in-depth blog post about how to create a simple to-do list app, I hope you learned a thing or two about React Hooks and Contexts and how you can utilize them within your own applications. If it was hard to understand, don't worry. It took me a couple of days to understand what was going on, but it feels good to be able to put all of these concepts together into a single project.

As I said before, some of the resources I used to learn about these include:

If you have any questions, reach out to me, I'll be more than happy to help. Also, make sure you follow me on Twitter @oohsinan where I post about full-stack development (mostly React).

Once suspended, oohsinan will not be able to comment or publish posts until their suspension is removed.

Once unsuspended, oohsinan will be able to comment and publish posts again.

Once unpublished, all posts by oohsinan will become hidden and only accessible to themselves.

If oohsinan is not suspended, they can still re-publish their posts from their dashboard.

Once unpublished, this post will become invisible to the public and only accessible to Omar Sinan.

Thanks for keeping DEV Community safe. Here is what you can do to flag oohsinan:

Unflagging oohsinan will restore default visibility to their posts.