In this part 2, we'll be using functions native to Javascript except of course Axios library to make API calls.

To return multiple values, pass it in an array return [joke, categories]

In this tutorial, we'll be achieving the same result as we did in part 1
but this time without q library functions like .spread() , q.fcall.

We're purely using functions native to Javascript just in case a library is deprecated or a version is deprecated, we won't be stuck 😉 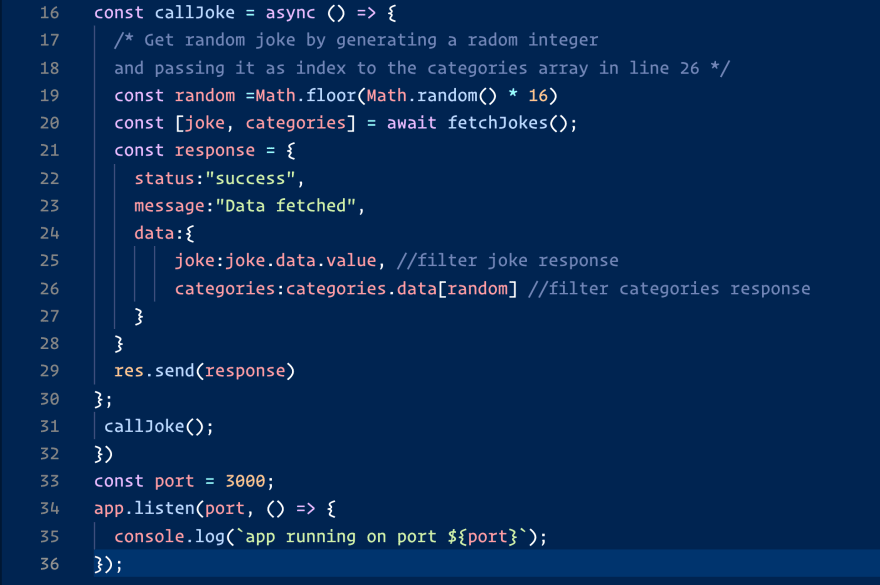 Two functions fetchJokes and callJoke were created. These are just variable names, you can use whatever name you really want.

In the function declaration of fetchJokes all API calls were made and the responses returned accordingly i.e return [joke, categories] in Line 10.

ThefetchJokes function is then invoked in the callJoke function, It's response is destructured in Line 17. You can checkout more on destructing here

Since the categories API returns up to 15 categories, In order to minimize the number of data exposed, I decided to generate a random number between 0-15, as shown on Line 19. The random number generated was then passed as an index to the array response returned from the categories API as shown on Line 26. Please note that this is not compulsory, you can achieve this however you see fit 😉

I'm using nodemon on my local machine, so I'm running this command; nodemon app.js [You can install nodemon as a dev dependency npm install --save-dev]

Make a request to : http://localhost:3000/chuck-norris

We've been able to return multiple functions and values while working with REST APIs both with q library in part 1 and native Javascript functions in Part 2.

EXTRAS:
As a developer, you should always have validation in mind and be 100 steps ahead 😂. Imagine if no data is returned when fetchJokes() is called on Line 20 ?. This will cause a code break in Line 25 -26. To mitigate this, just after line 20, before declaring the response variable on Line 21, we can do a check to be sure that the API returned a data response before proceeding, if not throw an error response.

Observe that after returning the error response, I ensured that I explicitly break out of the scope throw new Error('ERROR_RESPONSE_SENT');
The reason is so that the other lines of code do not continue to run after I have returned the response. A Javascript developer MUST keep this in mind. EXPLICITLY break out of scope.