I sometimes need to debug issues related to incorrect variable substitutions or filters in my deployments.

The Octopus docs have some tips on debugging problems with variables.

The third option, writing variables to the deployment log, is the one I use the most.

Octopus provides two system variables, OctopusPrintVariables and OctopusPrintEvaluatedVariables. Setting these variables to True will write all variable values to the deployment log.

I find these useful enough to keep them in the project. Before, I have left the values set to False when not using them. I change them to True when I need to debug other variables. The doc page mentions that you can update the variable snapshot on a release instead of creating a new release when adding or updating these variables.

I added a little extra to my configuration to avoid switching the values back and forth - prompted variables.

I configure OctopusPrintEvaluatedVariables to also prompt with the label Print Evaluated Variables?. 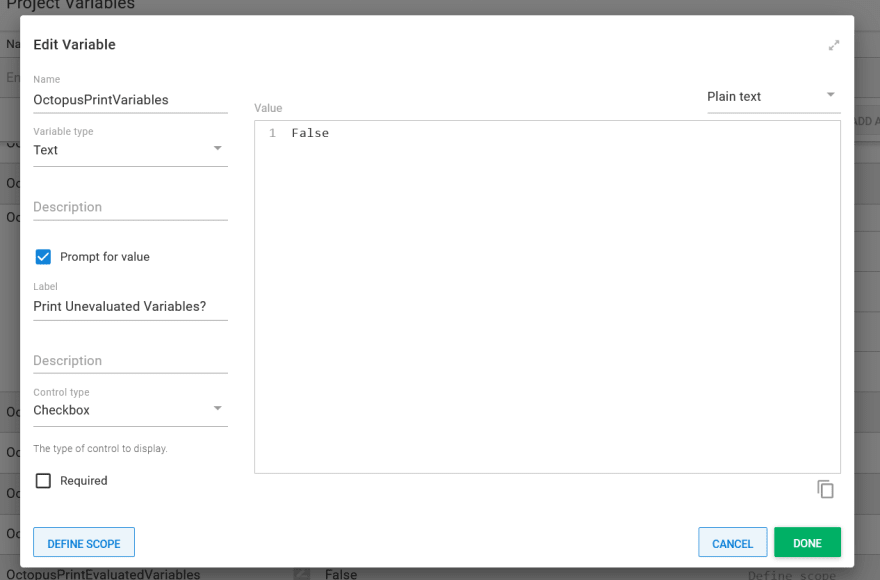 The values will default to False. I can check the boxes during a deployment to turn on the debug logging only for that deployment.

This post was originally published at blog.rousseau.dev. Cover photo by Timothy Dykes on Unsplash.

Once suspended, octopus will not be able to comment or publish posts until their suspension is removed.

Once unsuspended, octopus will be able to comment and publish posts again.

Once unpublished, all posts by octopus will become hidden and only accessible to themselves.

If octopus is not suspended, they can still re-publish their posts from their dashboard.