Go has some really great tools, and most of these are all built-in so you don't have to look very far to do much outside the core language and tooling. Documentation is comprehensive, the language is minimalist in nature, and it is surrounded by a massive community. In this article, I'll show you some companion projects that help you with debugging your go projects.

There are a few projects you can use to debug your go applications. The one most recommend is Delve as an alternative to the gdb. GDB is the GNU symbolic debugger and prior to delve this was the only way to actually debug Go programs. Luckily, that's not the case anymore and you can now combine Delve with VS Code quite easily.

You can use the standard go get method

Alternatively, you can clone the repo directly and install with make.

You will need to make sure you have xcode-select command line tools installed prior to this (as well as Go itself).

Once you have that, use the standard go get to install.

Delve can be installed in Windows with the go get method

Setting up VS Code

You can setup Go in VS Code by making sure you have the vscode-go extension installed. You can do this by:

Next you'll need to install the dlv tool for vs code itself.

Once you have this, you are ready to start debugging!

Open up the package main or test file you want to debug. Open up the command palette (Ctrl+Shift+P / Cmd+Shift+P) and select Debug: Start Debugging then select Go. This will start things up and hit your breakpoints as you would expect. 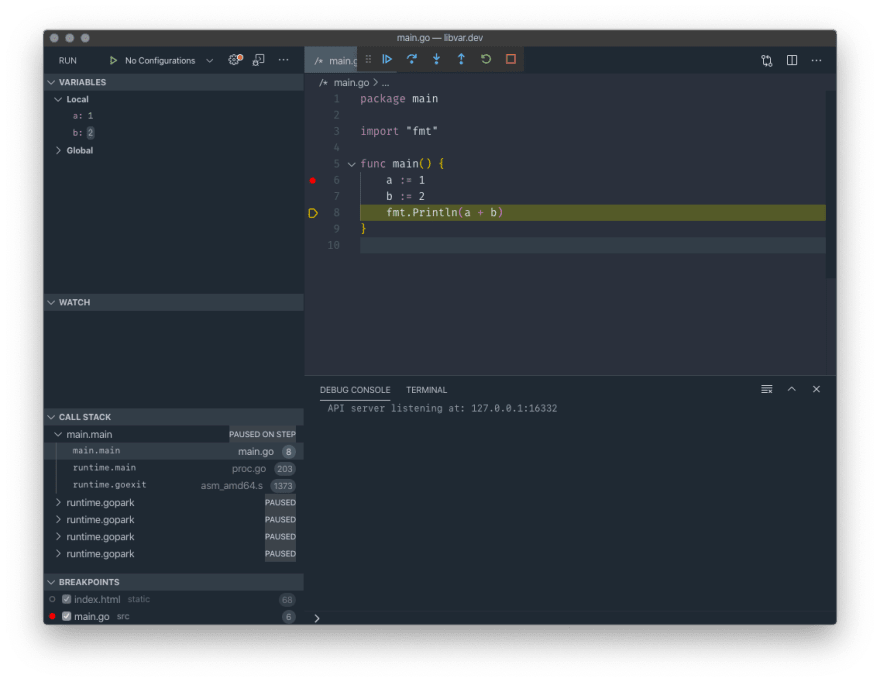 For more details, check out the extension for VS Code and the various integrations for Delve

How To Check if String Contains Specific Word in PHP Laravel

Developing a RESTful API with Go

Tom Holloway 🏕
Software Developer for as long as I can remember, building startups and projects. I've worked mostly in analytics, devops, and data science research. Running has proved useful so I enjoy doing it.
10 Awesome Rust Crates and Resources to Learn
#rust #productivity
Resources for learning about CRDT for realtime collaboration
#crdt #systems #productivity
Undo in Git: How to fix common mistakes
#git #productivity #webdev #beginners