Nx Console is the UI for Nx & Lerna. It’s available as a VSCode extension (and more IDEs coming soon!) and with it, you get powerful features like:

The Nx Console project started many years ago and went through various iterations. From a small, standalone client for angular schematics to what it is today: A fully-integrated tool to help you be more productive while developing with Nx.

And folks like it: We passed a million installs this year! 🎉

Of course we as maintainers need to make sure that all of our features work when we make a PR or release a new version.

This used to mean manually clicking through features in different sample workspaces - as you can imagine, this quickly became tedious as well as unreliable. Keep in mind that Nx Console works not just for Nx but also for Lerna and Angular workspaces across multiple versions!

We needed a solution to automate this.

The Problem with testing VSCode extensions

There’s many different kinds of tests and different ways to structure and write them. Let’s go over four common types of tests and see how to use them in the context of a VSCode extension.

WebdriverIO (abbreviated as WDIO) is an E2E testing framework for Node.js. It allows you to automate all kinds of web and mobile applications using the Webdriver or Chrome DevTools protocols.

In theory - since VSCode is built on Electron and is just Javascript, HTML and CSS under the hood - you could use any other framework like Cypress or Nightwatch to test it.

WDIO has one big advantage: The wdio-vscode-service . It’s a plugin that integrates with WDIO and handles all setup-related work for you. You won’t have to think about downloading, installing and running a VSCode instance or the matching Chromedriver. On top of that, it bootstraps page objects for many functionalities and lets you access the VSCode API via remote function execution.

All these (and more) features enable you to set WDIO up quickly and move on to writing test!

Setting up WDIO is a straightforward process. By following the installation guide you get a preconfigured wdio.conf.ts file and all required dependencies installed. After adding some types to tsconfig.json and tweaking some paths in wdio.conf.ts to match our folder structure, we were already at the point where we could execute wdio run ./wdio.conf.ts . You can see that VSCode is downloaded and unpacked for us. But of course, without any tests nothing really happens. Let’s change that!

Writing a test isn’t very complicated. Create a file in a location matching your configuration’s specs property and WDIO will pick it up automatically. You can use mocha, cucumber or jasmine as test frameworks and start writing describe , it and before blocks like you’re used to.

Refer to the WebdriverIO docs to learn more about its API and how to write tests.

If we run wdio run ./wdio.conf.ts again, we will see that WDIO is using the cached VSCode binary and successfully executing our test!

Integrating with Nx - defining a target 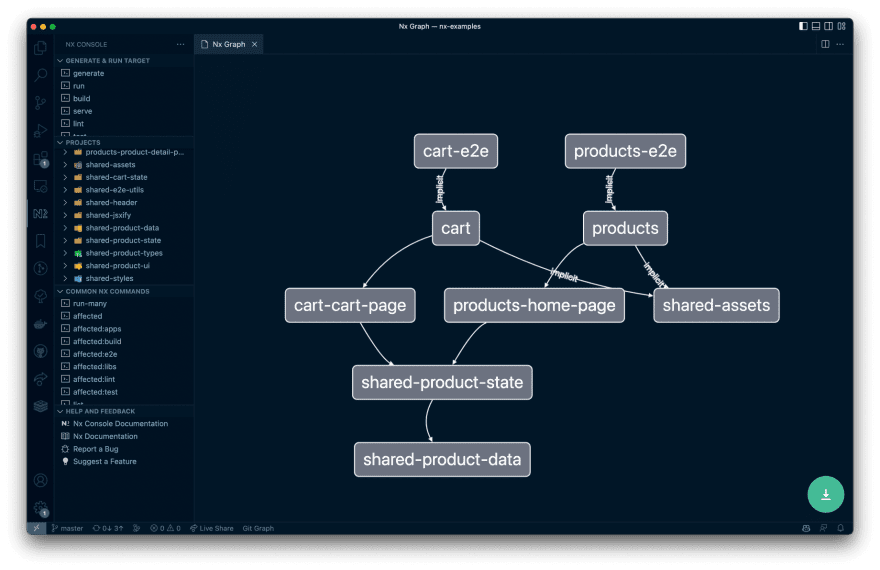 Of course, we wanted to take advantage of Nx’s powerful features like the task graph, computation caching and distributed task execution. If you’re working on an integrated style Nx repo, you get access to many official and community plugins that allow for instant integration with popular dev tools. Jest, ESLint, Cypress and many more have executors (more on that here) that allow you to run them through Nx. This isn’t the case for WebdriverIO, so we had two options: Create a custom plugin and WDIO executor or simply use nx:run-commands to wrap arbitrary commands with Nx. If WDIO became widely used in our repo, writing a custom plugin isn’t too much effort and could definitely be worth it! But for this one-time usage, we went with the quicker option. Let’s set up an e2e target like this:

Now, if we run nx run vscode-e2e:e2e , we will see WDIO run inside Nx!

While the output doesn’t look too different, this enables some amazing features! If we run the tests again, they will complete in a few milliseconds because the result could be retrieved from cache. Also, because we defined dependsOn and implicitDependencies , Nx will always make sure that up-to-date versions of Nx Console and the nxls are built before E2E tests run. All this with just a few lines of config!

Another important step in getting the maximum value out of automated E2E testing is running it in CI. Adding new checks to an existing Github Actions pipeline isn’t complicated, so a single line of yaml configuration should do the trick:

nx affected analyzes your code changes in order to compute the minimal set of projects that need to be retested. Learn more about it here: How Affected Works

This will fail, however, because WebdriverIO tries to open VSCode and expects a screen - which action runners obviously don’t have. If we were testing on a simple Chrome or Firefox instance, this could be solved by adding --headless to the browser’s launch options. VSCode doesn’t support a headless mode, though, so we had to find another solution: xvfb.

xvfb, short for X virtual frame buffer, is a display server that allows you to run any program headlessly by creating a virtual display - the frame buffer. To run our E2E test through xvfb on CI, two steps were necessary:

First, we created a new configuration in our e2e target that runs the same script, but through xvfb.

Second, we have to make sure xvfb is installed on our action runners. Theoretically, we could just run sudo apt-get install -y xvfb on all our runners and call it a day. But for clarity’s sake and to demonstrate some of the advanced things you can do with Nx Cloud, we decided on a different solution. We want to create two kinds of runners: One with xvfb installed and one without it. This can be done by using the NX_RUN_GROUP variable in our agent and task definitions. With it, E2E tests are run on the first kind and other tasks are run on any runner.

First, we specify a unique value of NX_RUN_GROUP per run attempt and set it as an environment variable in our agent definition. Then, we make sure xvfb is installed on these agents.

In action.yml , where we specify the checks to be run, we provide the same NX_RUN_GROUP environment variable for our E2E task.

Nx Cloud then matches these run groups and makes sure that all E2E tasks are only executed on agents with xvfb installed. With it, we can now do everything we can do locally, with a real screen. For example, we take screenshots on failure and make them available to download from GitHub via actions/upload-artifact .

In the end, we have fully functioning E2E test running on every PR, fully cached and distributable through Nx.

I want to take a moment and give special thanks to Christian Bromann who is a lead maintainer on WebdriverIO and the wdio-vscode-service. Without his foundational work, this would’ve been 100x harder.

If you have questions, comments or just want to chat about Nx Console, you can find me on twitter: @MaxKless

Some of the code snippets I showed here have been shortened for clarity, but if you want to see our setup with all details, head over to GitHub:

Nx Console is the user interface for Nx & Lerna.

The UI for Nx & Lerna

Developers use both command-line tools and user interfaces. They commit in the terminal, but resolve conflicts in Visual Studio Code or WebStorm. They use the right tool for the job.

Nx is a command-line tool, which works great when you want to serve an application or generate a simple component. But it falls short once you start doing advanced things.

Once unpublished, this post will become invisible to the public and only accessible to MaxKless.