That is the only difference between packets and frames but it is the core reason for their differences in attributes and the stage in which they are produced in a transcoding pipeline.

Let us understand this with an example

Taking referrence from the famous libav tutorial on github 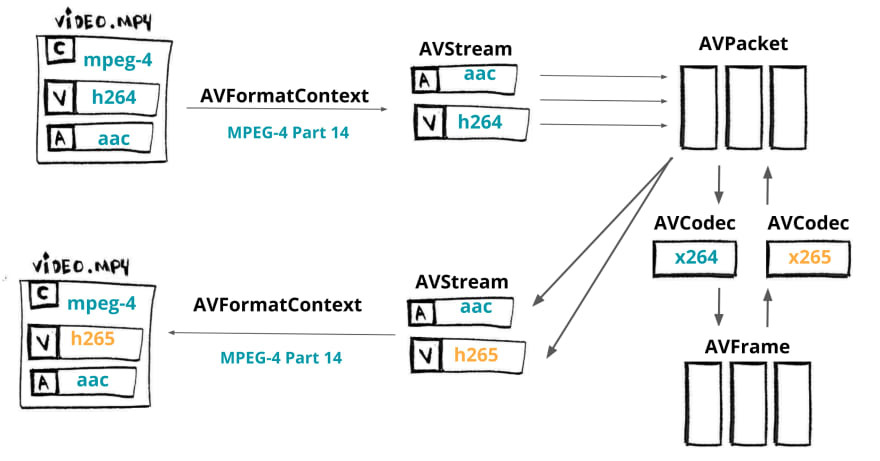 The AVFormatContext is the abstraction for the format of the media file, aka container (ex: MKV, MP4, Webm, TS). The AVStream represents each type of data for a given format (ex: audio, video, subtitle, metadata). The AVPacket is a slice of compressed data obtained from the AVStream that can be decoded by an AVCodec (ex: av1, h264, vp9, hevc) generating a raw data called AVFrame.

To implement this, we use the following functions (in this order)

We then perform any modifications such as scaling, resampling, cropping, format conversion, etc. on the raw frame.
Remember to keep the frames compatible for the encoder being used.

A (encoded) packet could contain multiple (raw) frames while. This can occur separately while encoding and decoding and depends on the attributes of the codec (AVCodecContext).
Hence it is a good idea to use avcodec_receive_frame inside a loop and read frames till it does not return an error, specifically AVERROR(EAGAIN), that signals that the internal buffer (of the codec) is now empty.

It can be confusing to find these methods being used in other libav projects/scripts to build a complete transcoding workflow with fewer function calls.
But, as mentioned here the above mentioned workflow of packets and frames is meant to replace these legacy functions.

How to convert mp4 to mp3 using python

Crash Course Redis - What is Redis?

Navdeep Singh Rathore
just trying to have fun while learning
What was your win this week?
#discuss #weeklyretro
#DEVDiscuss: to Specialize or to Generalize?
#devdiscuss #career #beginners
I challenged myself to read every day, and it changed my life 📚
#watercooler #reading #productivity #motivation

Once suspended, nsrcodes will not be able to comment or publish posts until their suspension is removed.

Once unsuspended, nsrcodes will be able to comment and publish posts again.

Once unpublished, all posts by nsrcodes will become hidden and only accessible to themselves.

If nsrcodes is not suspended, they can still re-publish their posts from their dashboard.

Once unpublished, this post will become invisible to the public and only accessible to Navdeep Singh Rathore.

Thanks for keeping DEV Community 👩‍💻👨‍💻 safe. Here is what you can do to flag nsrcodes:

Unflagging nsrcodes will restore default visibility to their posts.