I recently saw the following tweet from @_georgemoller which posed an interesting question related to component re-rendering in React: 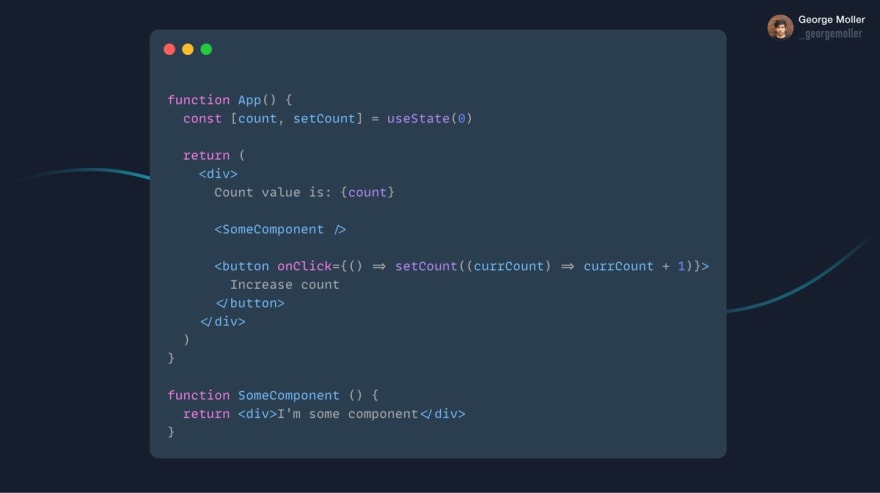 When incrementing the count, <SomeComponent />:

a. Will re-render each time
b. Won't re-render at all because it doesn't consume the count variable

So will <SomeComponent /> be re-rendered every time the value of count is updated?

For testing, I simply created a new project using create-react-app. After that I proceeded to delete all the extra stuff not needed for this exercise and put the code in App.js. 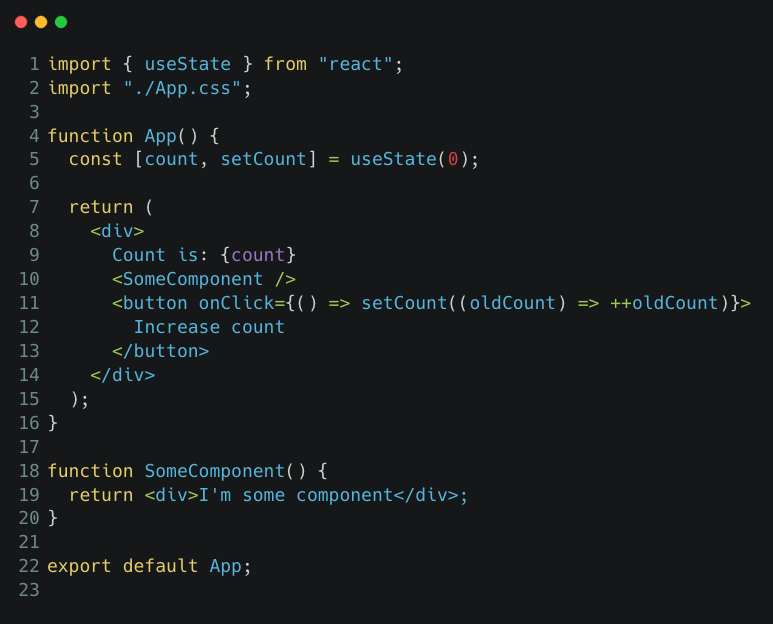 To get to our answer we need a way to verify whether a component was re-rendered or not. The easiest way to do this would be to use the React Developer Tools. These developer tools are available for all major browsers as an extension (except Safari I think). 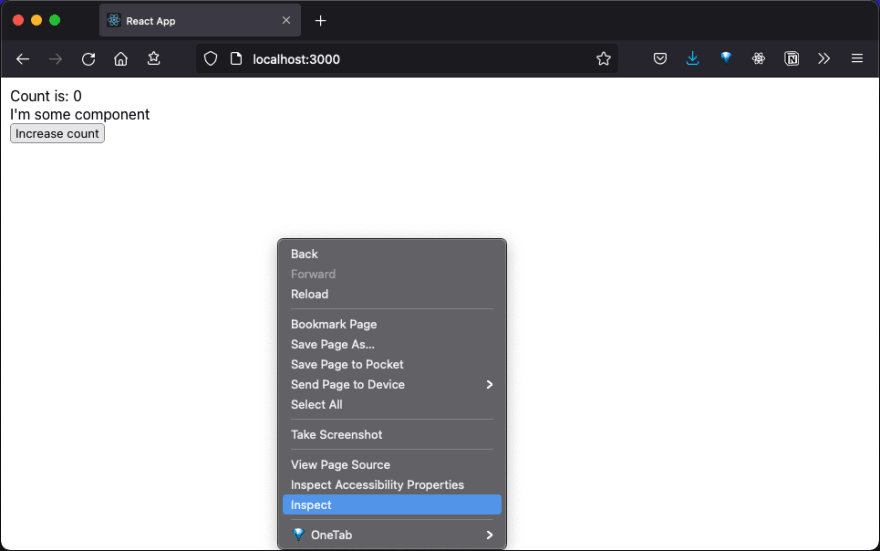 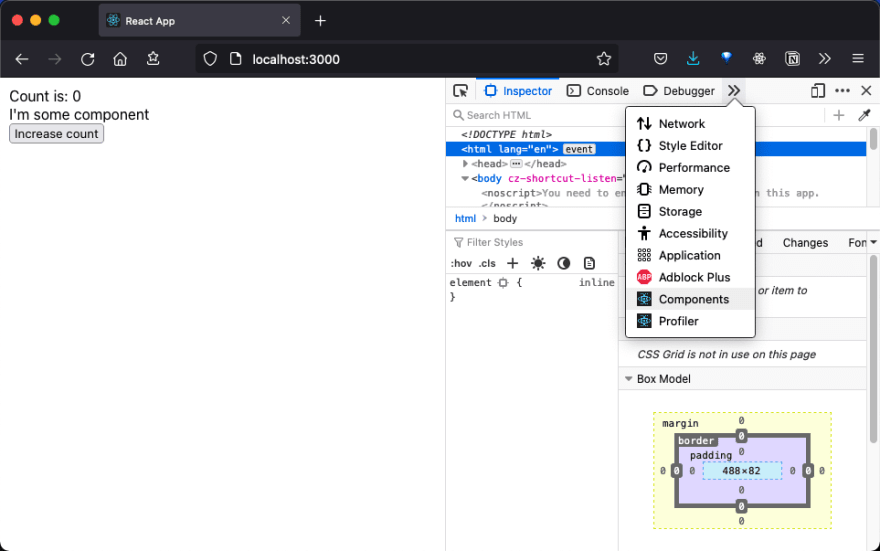 This tool shows us all the components in our React application and their relation to each other (children are indented under their parent component). Clicking on a component shows more detail like the values of its state and props.

As the name suggests, enabling this setting means that any component that is rendered/re-rendered will be highlighted.

Interesting! Not only <SomeComponent /> is re-rendered every time the state changes but the text displaying count's value and and the <button /> are also re-rendered.

Just to drive this point home, and emphasize the fact that it does not matter where the value of count is actually displayed, let's consider some additional scenarios. 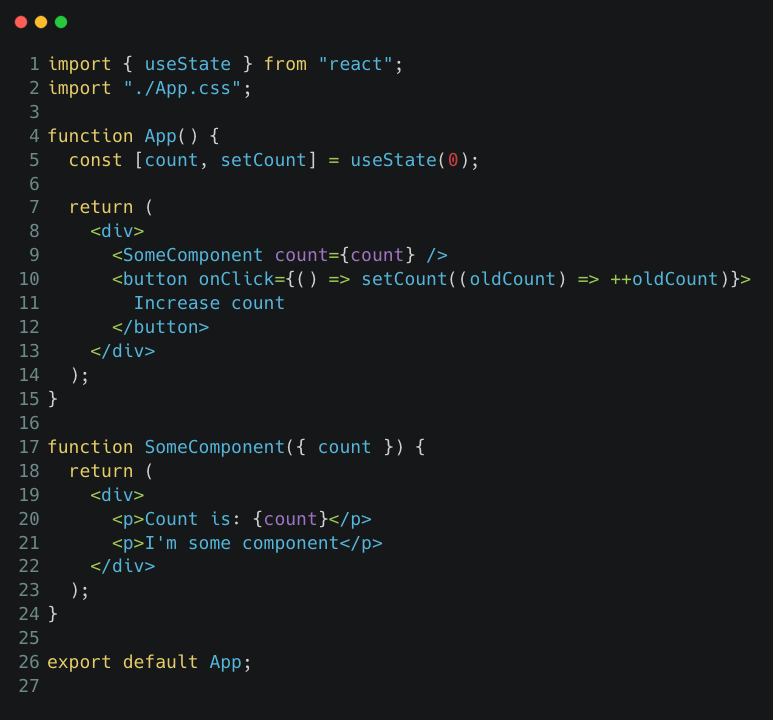 I had to introduce a couple of <p> tags just to keep everything neat. 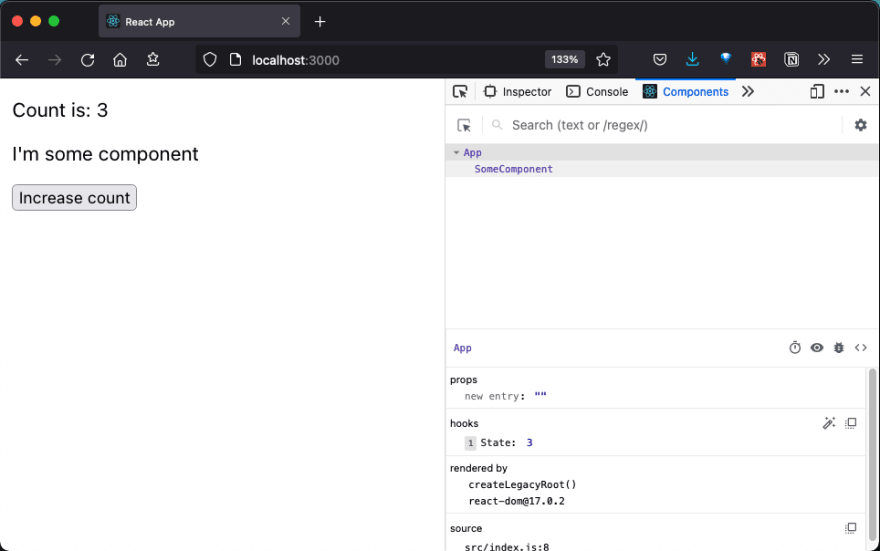 Now, practically speaking, the only thing updating the display every time the increment button is pressed is inside <SomeComponent /> on line 20. So how will React handle the re-render? 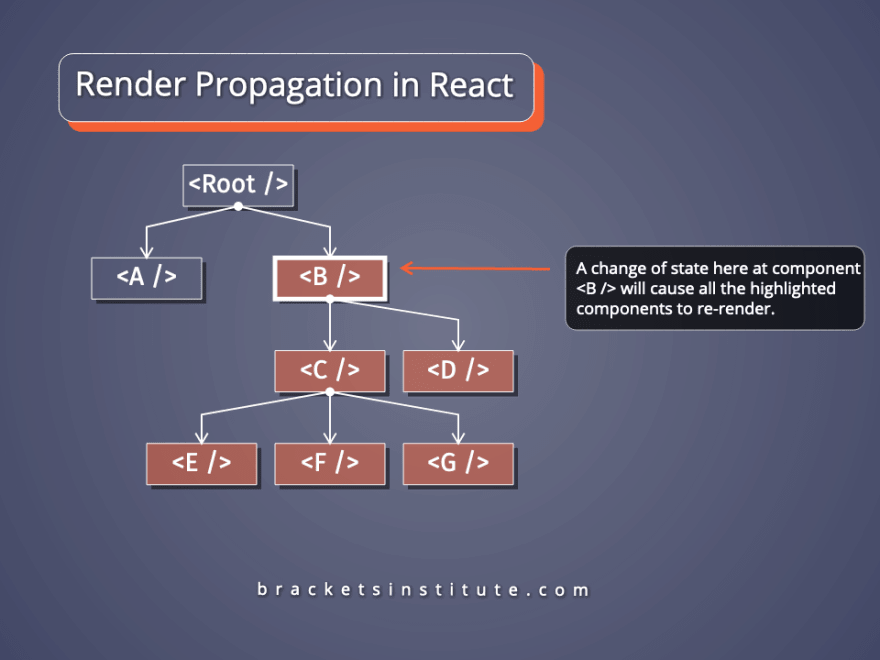 This brings us to the second scenario.

Since we now know that it makes no difference, let's display the value of count from within <App /> instead of <SomeComponent /> (just like in the original code). Additionally, I've created a bunch of components just to create a hierarchy. 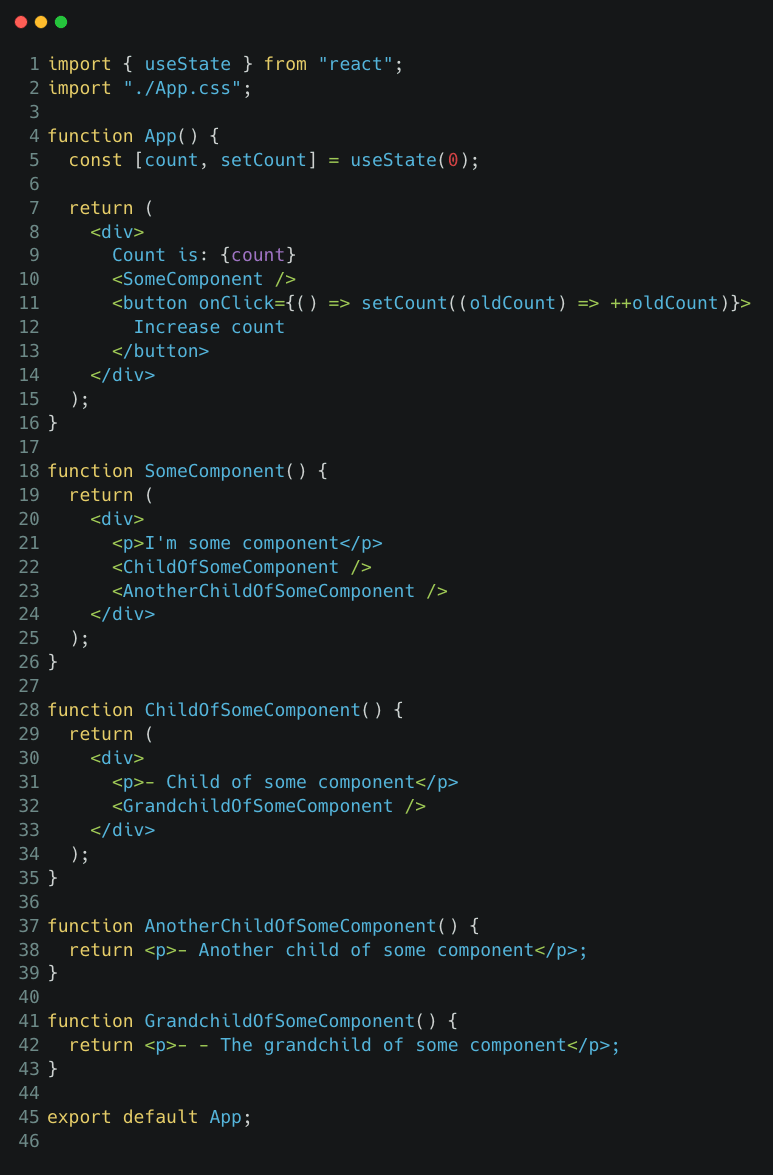 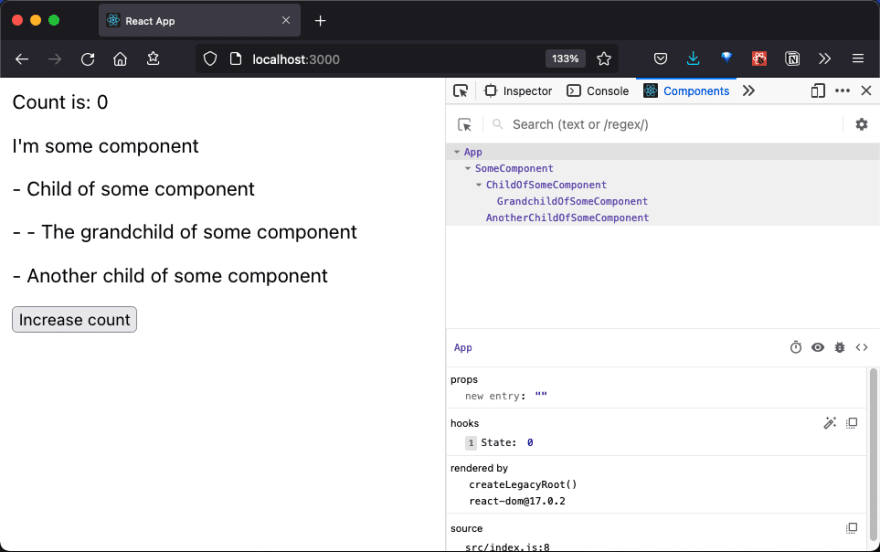 By now it should be crystal clear as to what will happen when we change count. 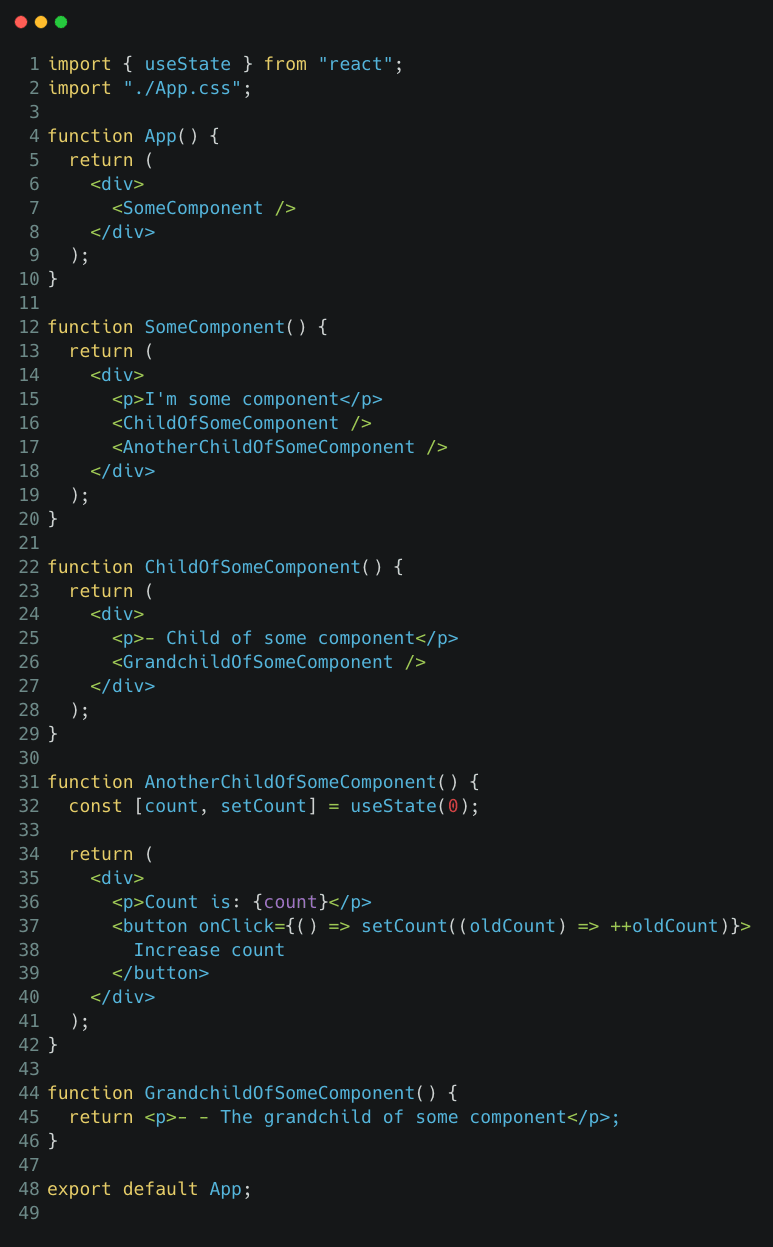 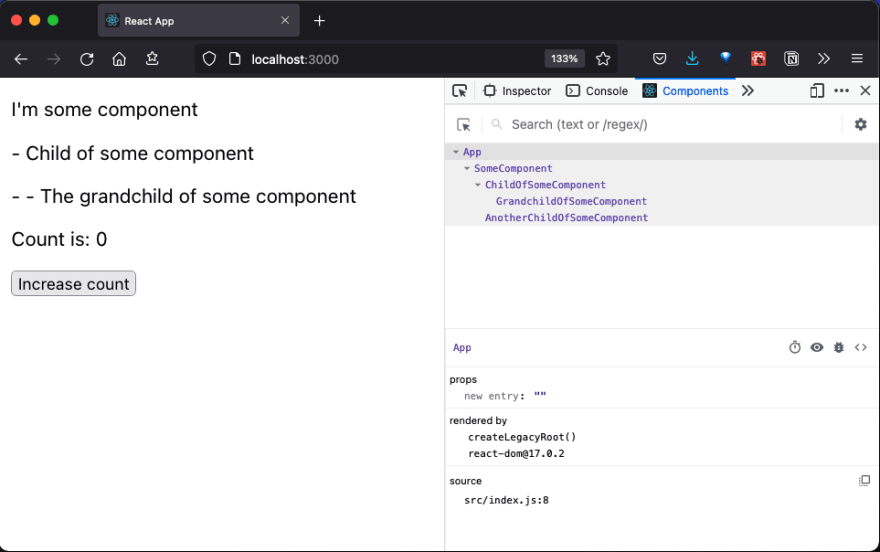 Time to change count and see React's rendering in action.

As can be seen, React only re-renders <AnotherChildOfSomeComponent /> and leaves the rest alone.

Kindly allow me to say it again...

Be very mindful of which component handles the state in a React application. If you put it in the root component (like in the original problem), your whole application will re-render every time that state changes. This can have a serious impact on your application's performance.

For example, imagine a bunch of data-driven child components that query various APIs. Every time those components are rendered they'll hit those APIs. Now that might be something you intend, but it just might be a side-effect of keeping state in the wrong component.

100 Days Of Code : A Commitment to Developer Life