Two pizza teams, scrum teams, tiger teams; there are many names for these close- knit bands of high-achievers who speed past the competition to fame and fortune. And there is one factor common to any well-performing team that greatly contributes to that success - size.

Surely bigger means better? More resource means more hands to do the heavy lifting and more feet to stomp out those blazing fires. Of course, any modern worker with even a little experience understands that this is clearly not the case; but why is that?

First lets look at what principles make up a winning team.

What makes up a winning team?

Transcendence: a sense of purpose, or self-realised goal that surpasses the ordinary aims of an average team.

Autonomy: having full control over their destiny by being empowered to make key decisions and stick to them.

Cross-Functional: having all skills necessary to see a project through from start to finish without relying on a third party.

What has this got to do with size … ?

These principles can only work if the team is able to hold a shared vision and shared understanding of the state of the world.

Every member of a team needs to know exactly what they’re fighting for and why that is important. Every team member needs to understand the key priorities facing them at any moment. And finally, there has to be a good amount of trust within the team so that discussion can be fair, open and free flowing.

We are, of course, social animals and our ability to achieve great things is deeply rooted in our sociology and biology. But, as we shall see, there are limits to how far this can be pushed.

You’ve likely heard the assertion that an average adult can hold only 7 ± 2 chunks of information in their working memory at any one time; a chunk being any atomic idea within our heads. The amount of information contained in a chunk can vary depending on our expertise in a topic —for example, a phrase in your native language many only form one chunk, whilst that same phrase in an unfamiliar language could take up many as you struggle to juggle the grammar in your mind.

This limited ability to pay attention to many things at once is part of our human nature, and it applies not just to generalised thinking but to all aspects of our lives, including communication.

As we increase a team’s size, the number of lines of communication doesn’t increase linearly, as you may expect, but by the addition of a new channel between the new member and every other member of the team.

By plotting the formula that describes this — n(n-1)/2 — you can see that things can get quite of hand very quickly: 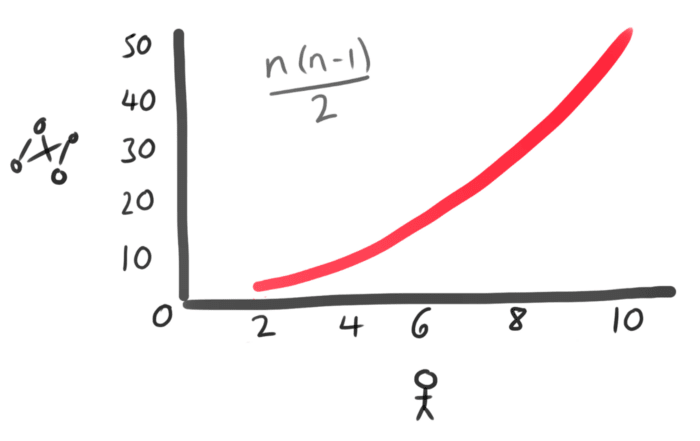 Each line of communication is another mental burden that your team members have to struggle with whilst trying to hold everyone else’s trajectory in mind. At some point, between the 5 and 9 mark, their brains just give up and teams tend to splinter into more cognitively manageable subgroups.

Think back to one of those situations where your team has to make serious commitment by way of a delivery date or some similar pressure? I’m sure there has been more than one occasion where this has resulted in a lot of poker faced, nervous shuffling as no-one wants to be the first to step up and make a suggestion for fear of putting their reputation at risk, or simply making of fool of themselves. Once someone finally does crack and gives it a go I bet that most, if not all of the rest of the team has followed suit pretty closely with the same or a very similar opinion.

This is an example of social proof.

Everyone hates canned laughter. It’s been polluting our comedy shows and TV screens (or rather speakers) for decades but continues to persist, and there is a good reason for this. It has been scientifically proven that we are easily nudged into a chuckle by hearing a number of other people rolling around the floor in hysterics, despite the fact we know they are phantom and have been cleverly added after the fact by some sound engineer.

All of this comes down to a simple heuristic or biological short-cut — that given some uncertainty (lack of concentration, understanding, or similar), we will will make fewer mistakes by acting in accord with the existing social evidence. In other words, usually when a lot of people do something and we’re unsure, it is probably the right thing to do.

Closely related to social proof, is the concept of pluralistic ignorance.

Let’s take the example discussed in Cialdini’s masterpiece. An actor pretending to have a heart attack, calls out for help in a public place. You’d think that any passers-by would come rushing in to save his life, but you’d be wrong. Entire groups of people fail to come to his aid, each certain that someone else will surely have helped and the ambulance must already be on its way. With several potential helpers around, the personal responsibility of each individual is reduced. Again, the uncertainty of the situation causes others to “just do” what everyone is doing.

We can translate this into a less extreme circumstance in the case of some important task that needs to be completed. Everyone agrees that the build system is a nightmare and needs to be fixed, or that waiting an hour for the tests to run is just an utter joke, but does anyone actually do anything — probably not.

So what can we learn from this?

Clearly a team is a very delicate ecosystem and individually we’re plagued by our cognitive biases too, but there are many strategies that we can employ to try and make the best of it all. Here are a few suggestions.

Scrum: The Art of Doing Twice the Work in Half the Time by Jeff Sutherland

Influence: The Psychology of Persuasion by Robert Cialdini PhD

Matthew Lucas
Software developer based in the Cardiff, UK, area. Any views or opinions expressed are my own and do not reflect those of my employer past, present or future.
Survivorship Bias and Negotiating Tech Hype
#architecture #programming #tooling #productivity
Tell Don’t Ask
#beginners #programming #codequality #architecture
“Finding Stuff” — Building a Great Search Experience
#programming #search #architecture #tutorial

Once suspended, notmattlucas will not be able to comment or publish posts until their suspension is removed.

Once unsuspended, notmattlucas will be able to comment and publish posts again.

Once unpublished, all posts by notmattlucas will become hidden and only accessible to themselves.

If notmattlucas is not suspended, they can still re-publish their posts from their dashboard.