Test effectiveness measurement. Credits for the title go to Yoni Goldberg. I love it because it gets the homonym and amazing graphic novel come to my mind.

So, you're developing a new function and it needs a lot of unit tests (like my Bitcoin address regex validation). Tell me: how could you judge the effectiveness of your tests? Are you sure that you're testing every feature with all the necessary corner cases? What makes you so confident?

I know the answer: Code Coverage and experience.

Do not worry, it's a road already traveled. The more you gain experience, the more you know that your code is not perfect, that's why you started testing after all... And the more you test, the more you want to be sure that your tests are effective.

Quoting a colleague of mine (Hi Mirko 👋):

Sometimes I introduce mutations to be confident about my tests

Checking that your tests are effective is pretty straightforward: place some bugs into your code and launch the tests. If the tests do not fail, they are useless to catch the bug. This is mutation testing! You mutate the source code (this newly and bugged source code is called "a mutant") and you launch the test suite against it.

In fact, the main goals of Mutation Testing are: 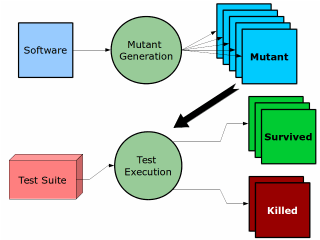 If you think that we're speaking about some testing freaks... Go ahead 😊

I chose to play with Mutation Testing with an old package of mine: Typescript Is Type. The whole package is pretty small, below the source code

Do you see the giant bug?

I installed Stryker that manages all the process of mutating my source code and launching the tests suite automatically.

Please, note: the Stryker installation is pretty straightforward, then you only need to add the files you want it to mutate through the Stryker configuration. In my case, it was just mutate: ["index.js"].

Once launched Styker with npx styker run I found a surprise, a mutant was survived

Stryker was telling me that if it mutated i < n with i <= n nothing changed from a testing point of view. The tests did not kill this mutant (the test passed both with i < n or the i <= n mutation). How could it be possible? How could the loop condition not influence on the tests? 🤔 Well, because of a giant bug! Take a look at the instance[keys[0]]! It did not use the i variable!!!

How I fixed it

The subject of mutation testing is not the source code but the tests themselves. And if my tests allowed a giant bug like the discovered one, I need to improve them.

I added some more tests and expectations that really test the missing feature (checking all the keys, not only the first one). Without changing the source code, I had now some failing tests, as expected! Then, I fixed the bug and the tests passed, perfect! I run Stryker again and everything is now fine 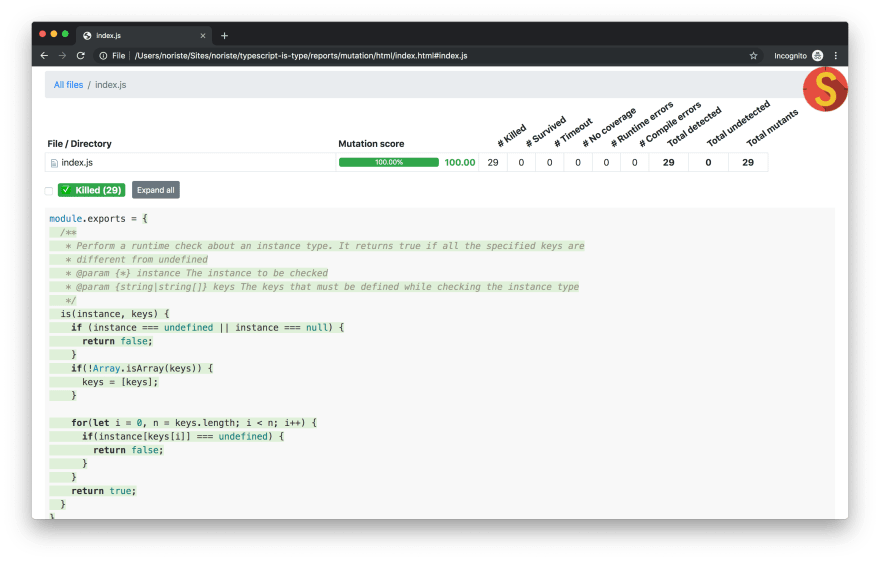 The more you test, the more you need to know if your tests are effective. Stryker is not perfect yet (for example: you can not ignore some lines at the moment, like some various console.log) but it's a good tool to catch bugs, improve your testing confidence, and making you code better tested.

I discovered the Mutation Testing topic while following Yoni Goldberg and watching his Advanced Node.js testing: beyond unit & integration tests (2019) video, take a look at him contents 😉