If you're like me, a big ass procrastinator, I'm sure you have said "I will do that later" to yourself before, right?

How many times times have you come back and done it? I'm guessing not that many times. If you do, congrats you're not a compulsive procrastinator!

In my case, and probably quite a few people, we don't go back. At least not in a short amount of time. We might come back in a week or two, a couple of months, or even years after.

You will not do it later (most likely)

Take this example, you've been working on a new feature. You finish it, do a refactoring pass, add a couple more tests to cover all cases and you've got just adding a couple of doc comments or writing documentation for this particular feature.

You are tired and just want to finish the tasks, so you say to yourself "I will do that tomorrow" or "I will do that when I have some free time". And intrusive, negative, or more so useless thoughts come to your mind, like: "It's not even worth it", "I just want to lay on the sofa and check youtube", "I would rather do anything else than do this", "I really like turtles"... ok, that last one might not be that bad lol! But I think the point comes across...

You might also say, I will wait to have free time, or I will wait to find a chill moment to work on this, or a moment without my children being around... That moment will never arrive, or will arrive very late.

If you start to have those kinds of thought and are thinking of leaving it for later, DON'T. More times than not, you will not do it tomorrow or you will not find the "perfect" moment for it and other stuff will take a higher priority.

"I will do it later" is where good projects die, and where crappy ones are born"

If you don't do it, and leave it for later, it will come back to bite you. If you haven't documented something, and come back after 4 months, 1 year, or even more. You will hate yourself for not doing it, and you will need to waste a lot more time to do it, as you don't have all the context and knowledge in your mind. Meanwhile if you do it while it's still fresh, not only will it take less time but it will most likely be better as you know all the ins and outs of the thing in question.

I'd say the main reason for this is procrastination from our part, but I think it's also a problem with small companies, startups and personal projects more than for big companies. But I have no experience working on big companies, so it might also be the case. Do let me know if you work at one!

I think that in some cases we have so much work, new features to implement, meetings, planning, tasks to move forwards and bugs to fix, that we have no time (or think we don't) to return to polish a feature, refactor an old file we left for another moment or document some aspect of our software that needs it. Priorities shift continuously so what might be kinda important today, will probably not be tomorrow.

How to solve it?

Easy. Just do it, more times than not, the thing we leave for later will take a relatively short amount of time to do if we do it in that moment. If we leave it for later it will take longer to do as previously explained. 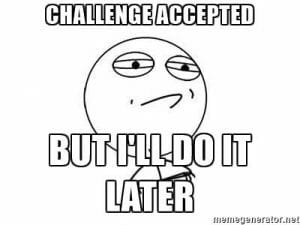 Doing it will also add value to the project, and you will thank yourself when you come back to it. If the thing you leave for later takes a long amount of time, it should've probably been part of the original task/feature.

When you see yourself leaving it for later, reconsider it. Have a thought and check if you can do it in a moderate amount of time, if so, do it. If not, also do it. You will not regret it, and your future you will thank you.

And remember to also share your ways of preventing it, they might help me or someone else!

I've briefly mentioned it in the post but want to expand a bit more on it. It's regarding that sometimes we have no choice but to do it later, be it because of pressure from management, clients, or because you have to go get surgery. Those cases are justified in my mind, as they're not under our control.

6 Ways To Make Money With Your Code

Once suspended, nombrekeff will not be able to comment or publish posts until their suspension is removed.

Once unsuspended, nombrekeff will be able to comment and publish posts again.

Once unpublished, all posts by nombrekeff will become hidden and only accessible to themselves.

If nombrekeff is not suspended, they can still re-publish their posts from their dashboard.

Once unpublished, this post will become invisible to the public and only accessible to Keff.

Thanks for keeping DEV Community safe. Here is what you can do to flag nombrekeff:

Unflagging nombrekeff will restore default visibility to their posts.