A phase is a FIFO queue of callbacks to execute. When the event loop enters a given phase, it executes callbacks until the queue is exhausted or the maximum number of callbacks is run and moves to the next stage.

The event loop has 6 phases, and they run in the following order:

You are ready to apply your newly acquired knowledge. Still, you can be disappointed when running a setTimeout after a setImmediate, or vice versa, because the result is not deterministic.

setTimeout schedules a callback after at least the defined milliseconds have elapsed. The CPU could be busy and Libuv is unable to set the task as complete before the event loop processes the timer phase. Consequently, the setImmediate callback could be run in advance, although the timer is the first phase.

In this example, the CPU is not busy, and the setTimeout callback is immediately added to its dedicated queue before setImmedate.

In this second example, the event loop starts processing the timer phase, but the timer has not expired yet, so setImmediate callback is run in advance.

You are now wondering how I can test the phases processing order. The following code snippet will help you prove the order of the phases. 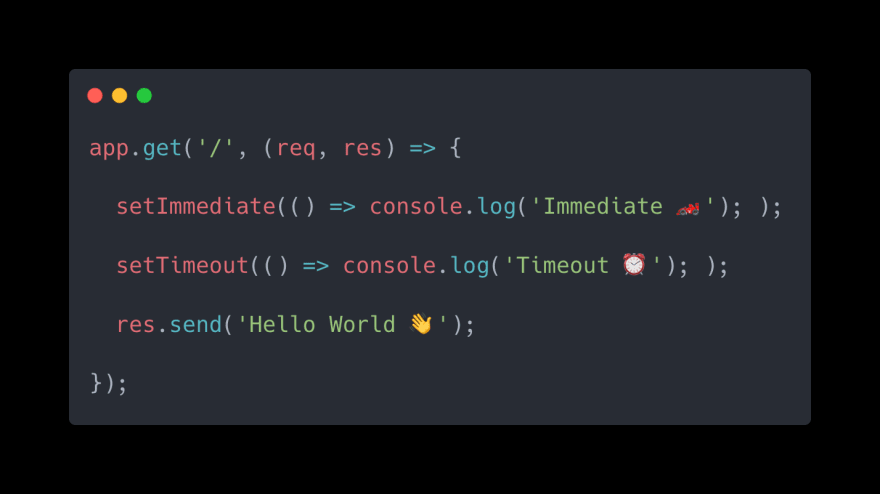 Once Node.js starts the program, the event loop processes all the queues and blocks on the poll phase waiting for incoming requests. When someone makes a GET HTTP request to the server, the event loop goes through these steps:

The code is available at:

Now, you understand the event loop and its phases. You can also tell the difference between setTimeout and setImmediate and expect a non-deterministic behavior when running them in sequence. In addition, you know that event loop blocks on the poll phase waiting for new I/O requests on a Node.js web server.

But where are promises handled in Node.js?

You will explore it in more detail in the following articles.

Once suspended, nodedoctors will not be able to comment or publish posts until their suspension is removed.

Once unsuspended, nodedoctors will be able to comment and publish posts again.

Once unpublished, all posts by nodedoctors will become hidden and only accessible to themselves.

If nodedoctors is not suspended, they can still re-publish their posts from their dashboard.

Once unpublished, this post will become invisible to the public and only accessible to Fabrizio Lallo.

Thanks for keeping DEV Community 👩‍💻👨‍💻 safe. Here is what you can do to flag nodedoctors:

Unflagging nodedoctors will restore default visibility to their posts.