Accessible websites can be used by everyone, regardless of their abilities. Designing and building accessible websites means ensuring they work with assistive technologies like screen readers or keyboard navigation and for people with color deficiencies.

Of course, there are many more disabilities, but these are the most common ones to keep in mind while building your web apps. This article serves as an introduction to accessibility and teaches you the basics of how to build accessible React applications.

Your React application will eventually render HTML, so it's not only important that your complex interactive components are accessible, but also you're basic markup and styling. Even making interactive JavaScript-heavy components accessible mainly consists of improving their markup.

But even without considering JavaScript, there are a few things you can do which will already greatly increase the accessibility of your site.

WCAG recommends to at least have a contrast of 4.5:1 and 3:1 normal text for text larger than 24 pixels, respectively. At least key here. Try to use a contrast that exceeds the minimum requirements. Both Chrome and Firefox developer tools will show an element's contrast when inspecting it.

Most likely you're already familiar with this. The alt attribute describes the content of an image. This description comes in handy if an image doesn't load correctly, for search engines that index your site, and most importantly for visually impaired users who rely on a screen reader.

Use labels for all interactive elements in a form, which are also known as form controls. They help the user understand what the form control does.

If you have a form control where the purpose is obvious when rendered visually, such as a search bar, use aria-label to let screen readers know the purpose of the element.

Buttons, such as icon-only buttons, where the purpose is only obvious when rendered visually should also be described using aria-label.

Screen readers need to know the language of the content on a website to use the correct pronunciation.

If some parts on a page are written in another language than the rest of the content, you can add the lang attribute to any HTML element which surrounds it.

There are a few extra steps involved in making high fidelity, interactive applications accessible. So once you implemented the aforementioned steps, try to improve the accessibility of your interactive components, like drop-downs, for example.

Semantic HTML elements are elements that convey their meaning to both the developer and the browser. This article by W3Schools offers a list of elements considered to be semantic.

Instead of relying on divs for your application layout, use the appropriate semantic elements HTML provides you. This helps screen readers and other tools identify the relevant content. 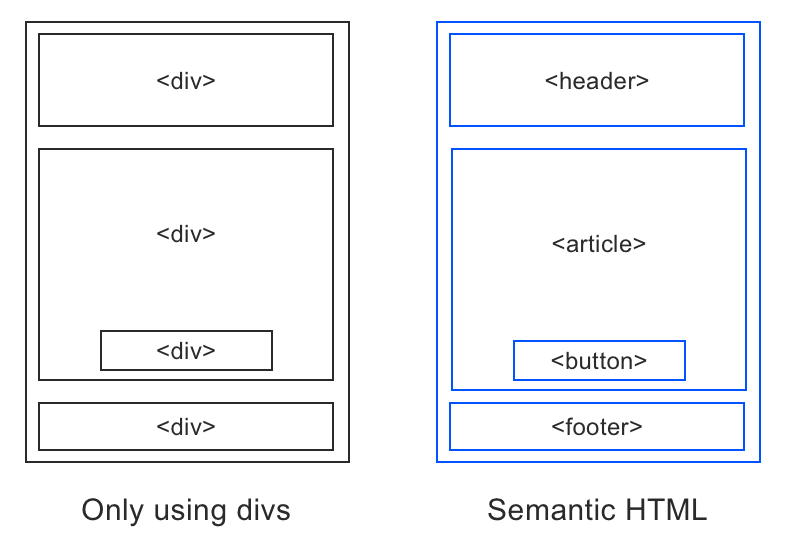 When developing React applications you have the option to build almost anything using only divs and spans. And while button or select elements aren't officially considered to be semantic HTML elements, they still convey a clearer meaning compared to a div. So instead of making a div an interactive, clickable element, use the proper HTML element, when available. This will save you from having to use lots of ARIA attributes, which we'll get to later.

Keyboard navigation is a huge part of accessibility, but it can also come in handy for anyone else who occasionally likes to navigate a website without touching their mouse. Keyboard navigation works by cycling through each interactive element by pressing tab and activating those elements by pressing enter or space. There are two important factors to consider when making sure keyboard navigation works correctly on your website: making sure every interactive element is reachable and not having custom CSS to hide the border that highlights the selected item. To manage item selection, tabIndex can be used.

Elements like links or buttons are inside the tab order per default (meaning, they can be reached using tab), so use them wherever possible. Whenever you have a custom interactive component, like a clickable div, you need to consider using tabIndex because otherwise, your component won't be reachable for keyboard users.

Interactive HTML elements like links or buttons are inside the tab order per default (meaning, they can be reached using tab), so use them wherever possible. As soon as have a custom interactive component, like a clickable div, you need to start thinking about using tabIndex because otherwise your component won't be usable for keyboard users.

ARIA is a specification that's a crucial tool for building accessible web applications. It offers numerous attributes that are used for supplying accessibility information. If you want to develop accessible JavaScript applications, ARIA is arguably the most important technology to use.

Since ARIA is somewhat complex, my recommendation is to use descriptive HTML elements wherever possible. Often, they eliminate the need for ARIA. But there are cases where simply using proper HTML isn't enough. That's where ARIA comes into play. ARIA attributes are one of three types: roles, properties, and states.

ARIA attributes are one of three types: roles, properties, and states.

In the next chapter, we're going to examine how you can use ARIA to make React components more accessible.

Take a normal progress bar like this one. Now, imagine, how would anyone who relies on a screen reader be able to understand its content? All the information is hidden within the styling, which is useless for a screen reader. The markup could be as little as one empty div.

Thanks to ARIA, we can utilize a few attributes to make this component fully accessible.

I chose this example because it nicely shows the capabilities of ARIA. But remember how I said to use semantic HTML wherever possible instead of a meaningless div? Turns out HTML5 comes with a progress element. Since screen readers can cope with default HTML elements, there is no need to add ARIA attributes.

However, if semantic HTML elements aren't flexible enough for your particular use-case, nothing is stopping you from building something custom. You just need to put in some extra work to make it accessible. Many popular UI libraries still use divs in combination with ARIA attributes for their progress bars.

Just like testing every other feature, it is crucial to test accessibility during development. For starters, use some sort of automated test. Google Lighthouse can spot some accessibility issues. Accessibility Insights by Microsoft and other tools that are based on the axe-core engine are also good choices.

While automated tests are a good place to start, you shouldn't solely rely on them. It is worth it to perform manual checks by using your website the same way someone who relies on accessibility features would. Great places to start are screen readers (like Voice Over on macOS) and testing controls by using only the keyboard.

While I believe it's important to know how to build accessibly React applications from scratch, there are many great tools that can make your life easier by providing customizable components that are accessible by default.

Noah Falk
maker
How to use the new Next.js Image Component in your MDX Blog
#react #showdev #webdev #javascript
Forem Open with the Forem app