For the past several months, I have been developing a SaaS product. This is my first post in a series to show you how to build your own product and deploy it to AWS. We will be creating an Angular frontend, Express.js backend, and using DynamoDb database. I will show you how to use Docker to containerize each component, and then deploying it on AWS. This post will show you how to set up a modular codebase and scaffold all the necessary components.

TLDR - Here is a link to my Github with the given code.

We will be following the Twelve-Factor App methodology. This is a framework to help you build software-as-a-service (SaaS). In setting up this project, we will be demonstrating the first two principles, Codebase and Dependencies. Our codebase will be tracked in source control and each component will be able to be developed, built, and deployed independently.

In my previous blog post, I wrote about how to containerize an Angular application. We will use that tutorial as a starter for this frontend.

In another separate previous blog post, I showed you how to containerize an Express.js application. We will use that tutorial as a starter for the backend.

A couple of notes on this structure:

Once you have all of your docker images created you should be ready to start each component! You can open three terminals and run docker-compose up dev in each components folder (webapp, api). Or you can use the -d (disconnect) flag to use a single terminal to run all three commands

Pro Tip - I love VS Code! I usually open a VS Code instance / window for the frontend and backend (2 total). You can then use the terminal in VS Code to start your container while you develop! This way your code and terminal are all in one place. I also use the VS Code peacock plugin to give a different color to each window. 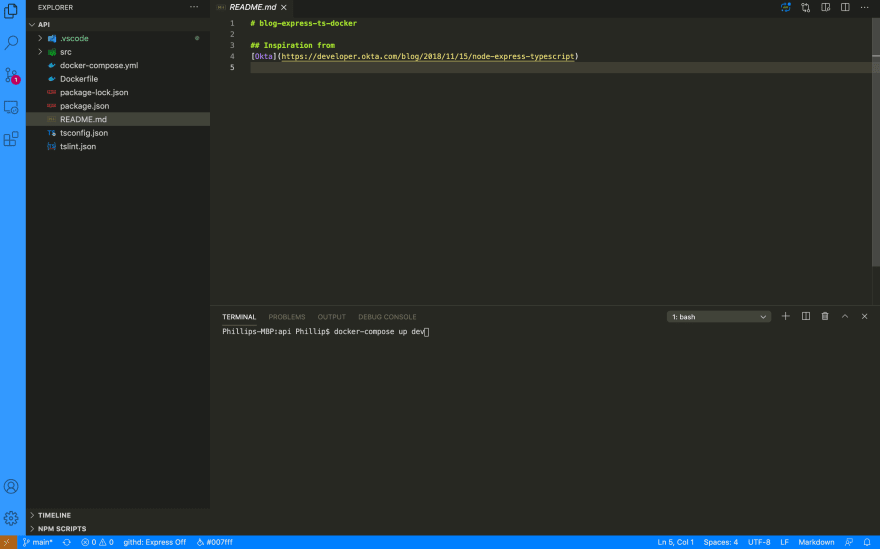 We have successfully implemented the first principle of the Twelve-Factor App, Codebase. This principle states that you should have one codebase tracked in source control. If you have more than one codebase this is typically no longer considered a single app, but a distributed system. There is nothing wrong with a distributed system but when you are first building a SaaS product you want to keep things simple and allow a developer to check out one codebase and get started ASAP. As your product grows you may find a use case for additional codebases.

The second principle of the Twelve-Factor App is Dependencies. This principle says that an app should never rely on the implied existence of system-wide packages. If the frontend and backend are deployed in two different environments this may break your system. You should be able to check out the codebase, utilize a dependency manager, and get started! We are using a mix of Node Package Manager (npm) and Docker. Both of these tools explicitly document the dependencies for each component of our SaaS product. NPM uses package.json to document the dependencies for our node components. Our Dockerfile describes how our Docker images should be built. Each component can be developed, built, and deployed independently.

That's it! If you run docker-compose up in each folder you will have successfully set up three components in our stack! Congrats!

Here is a link to my Github with the given code.

Edit npm package and persist the changes on npm install

Firebase Emulators Setup - Tips to overcome trouble, hurdles and pitfalls to get them up, running and data resyncing

How to add Bootstrap 5 to your Angular 11 project