This post originally appeared on my LinkedIn profile in another language.

Both in my work and personal life, I've used a plethora of project management tools but only Trello has stuck. However, even Trello can be useless unless you start taking care of your board systematically.

Trello's semi-agile default flow (To Do → Doing → Done) is, of course, easy, but especially for me, it comes with a clear risk of not starting the actual work on tasks. Happily (or sadly) the cards linger on my evergrowing To Do list.

What I prefer to use instead, is a popular method commonly referred to as the Eisenhower Matrix. In brief, it consists of four categories (or lists in Trello). They are following: 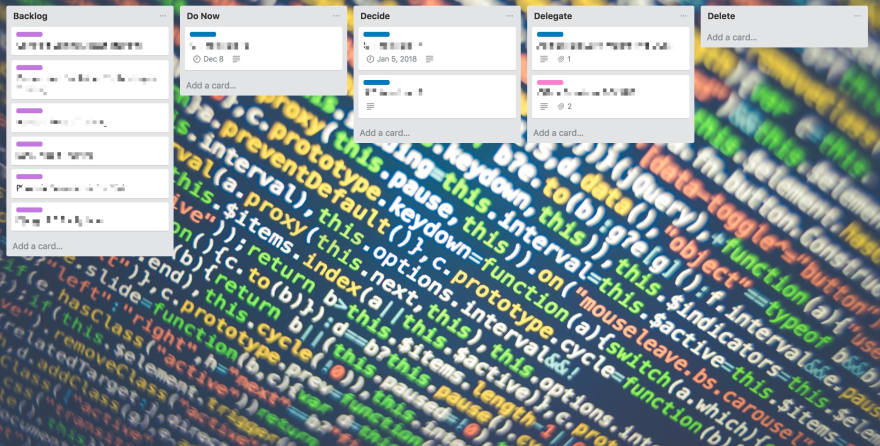 I'm also using an additional list called Backlog where I'm collecting all the ideas before deciding their place in the matrix. This list should be automated as far as possible with tools like IFTTT and Zapier. For example, e-mails, tweets, SMS, notes and other material can easily be forwarded to the backlog with customized triggers.

Ideally, the current state of the matrix should be reviewed at the beginning of each week, but it's not too bothersome to check the status from your mobile app every now and then.

Now you might be thinking to yourself, how general this advice is. Well, it can be applied to a number of use cases. Take, for example, quality assurance in an open-source software project.

You would gather all the bug reports and issues from users automatically to your Backlog. Critical defects would be sent directly to list Do Now. Those needing further discussion would be in list Decide. Perhaps a 3rd party dependency introduced something unwanted in its latest release which you can't fix by yourself, that would go to list Delegate. Naturally, not all bug reports are born equal so discard user mistakes and such to list Delete with informative comments. This kind of approach will further benefit if your board is public (omitting security defects) so others can view and possibly collaborate on tasks.

Finally, to not make this sound like a $0.02 product advertisement, the matrix can be implemented in many other apps, and even with a combination of a pen, some paper, and a cardboard box.

How old were you when you started coding?

VIM: This Is How A Love-Hate Relationship Became A Real Bond

These Incredible Chrome Extensions Are A Boon To Every Developer!

Niko Heikkilä
Software craftsman with a strong passion for open source software and continuous improvement.
Bringing Back the Technical Excellence: Rules of Thumb for Effective Software Lifecycle Management
#testing #tdd #productivity #design
When to Pair Program and When to Go Solo
#programming #productivity #books #codereview
You Can't Grow Yourself Unless You Grow Others
#career #psychology #leadership #management

Once suspended, nikoheikkila will not be able to comment or publish posts until their suspension is removed.

Once unsuspended, nikoheikkila will be able to comment and publish posts again.

Once unpublished, all posts by nikoheikkila will become hidden and only accessible to themselves.

If nikoheikkila is not suspended, they can still re-publish their posts from their dashboard.