Crafting a perfect dev environment takes time and effort. It is a tedious process that you have to do every time you change a working environment. For example, you buy a new laptop, switch to another operating system, or switch to a new project that requires extra tools and configuration. The latter case is interesting to me because I like to try out new things. Varying from different tools, and frameworks to new programming languages.

There are lots of benefits to making a reproducible dev environment. For me the two main ones:

Anatomy of a dev environment

Basically, you can divide aspects of a dev environment into next categories: 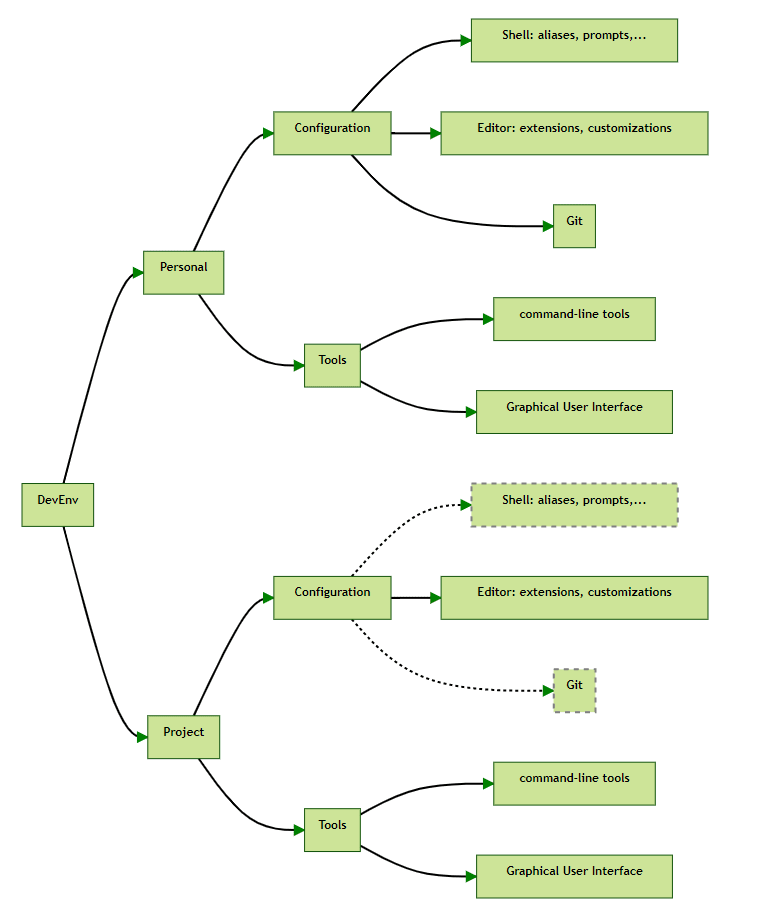 It might seem like a lot but luckily we have good tools to automate the scaffolding process. Namely dotfiles and devcontainers.

Dotfiles are focused on personal configuration aspects and are usually maintained by a person. Dotfiles are tailored to make up a unique developer experience. Previously, I wrote about it here: Development environment based on Windows Terminal + WSL + ZSH + dotfiles

Usually, dotfiles are comprised of common configurations and utilities that could be used on various platforms and platform-specific configurations. For example, you use a specific package manager innate into the system to install dependencies.

Here is an example of how I do it: https://github.com/NikiforovAll/dotfiles. As you can see, there are three different setups for windows, wsl, and dev-containers.

As result, we can create a dev environment of choice from a scratch. All you need to do is to run a one-liner:

An approach like this does work. But it is annoying and impractical. We can do better about it. I will show you in a moment.

From the official documentation:

The Visual Studio Code Remote - Containers extension lets you use a Docker container as a full-featured development environment. It allows you to open any folder or repository inside a container and take advantage of Visual Studio Code’s full feature set. A devcontainer.json file in your project tells VS Code how to access (or create) a development container with a well-defined tool and runtime stack. This container can be used to run an application or to separate tools, libraries, or runtimes needed for working with a codebase.

A devcontainer.json file in your project tells Visual Studio Code (and other services and tools that support the format) how to access (or create) a development container with a well-defined tool and runtime stack. It’s currently supported by the Remote - Containers extension and GitHub Codespaces.

DevContainers are meant to be reusable and extendable. From my experience, they have improved in this regard. Here is how you can add dependencies via .devconatiner.json

A better way to do dotfiles - Dotbot

💭 My initial version of dotfiles was intended for wsl & early devcontainers version. Since then, I’ve learned a couple of lessons. Mainly, it is a good idea to keep dotfiles simple and rely on essentials. You don’t need to bring tons of dependencies and convoluted configuration files. The simpler - the easier to maintain and synchronize.

So, I’ve created another dotfiles repo: https://github.com/NikiforovAll/dotbot. This one is based on https://github.com/anishathalye/dotbot. Dotbot is a tool that bootstraps your dotfiles. It is straightforward to use. I suggest you give it a try on your own.

As discussed, since I deliberately choose to not have heavy dependencies it takes a couple of seconds to install dotfiles. Exactly as I want it to be. My general suggestion is to move the heavy lifting of dependencies installation to DevContainers.

The resulting dev environment is combined from diverse sources. Roughly speaking a host (developer machine/codespace) is composed of the next pieces: 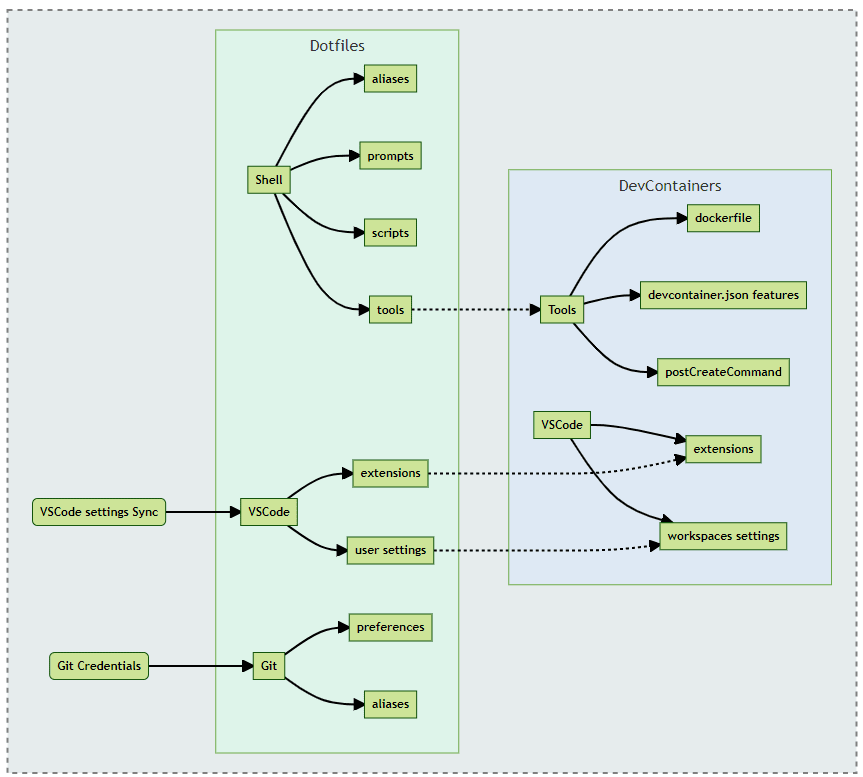 The suggested approach abstracts away the host. It doesn’t necessarily have to be your machine. This is what “GitHub Codespaces” product is about.

GitHub Codespaces run on a variety of VM-based compute options hosted by GitHub.com, which you can configure from 2 core machines up to 32 core machines. You can connect to your codespaces from the browser or locally using Visual Studio Code. 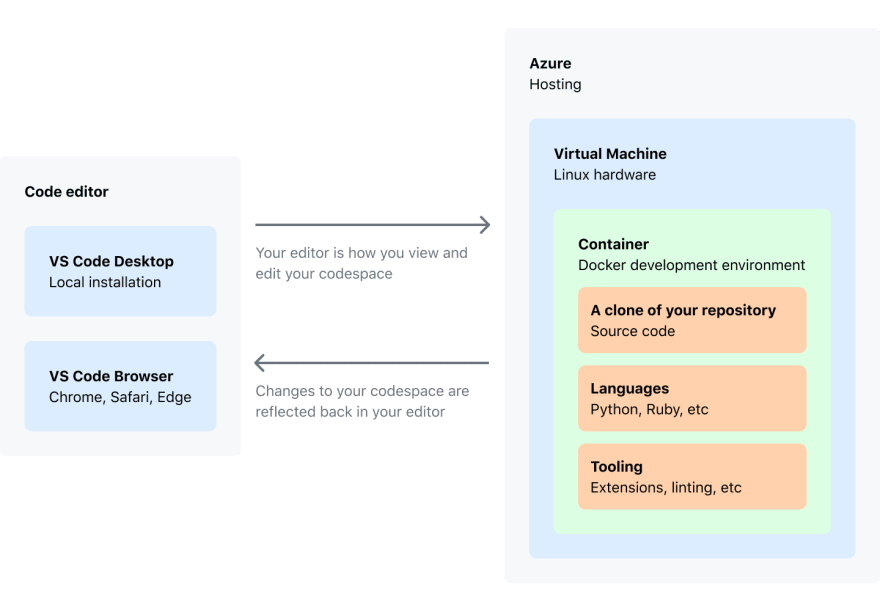 The end goal is to set up a full-featured dev environment and measure how much time it takes.

The demo combines techniques from both Infrastructure as a Code (IaaC) and Dev Environment as a Code (DEaaC). It takes only 15 staggering minutes from zero to deployed azure resources on the first launch.

2️⃣ Go to repository and launch a codespace: 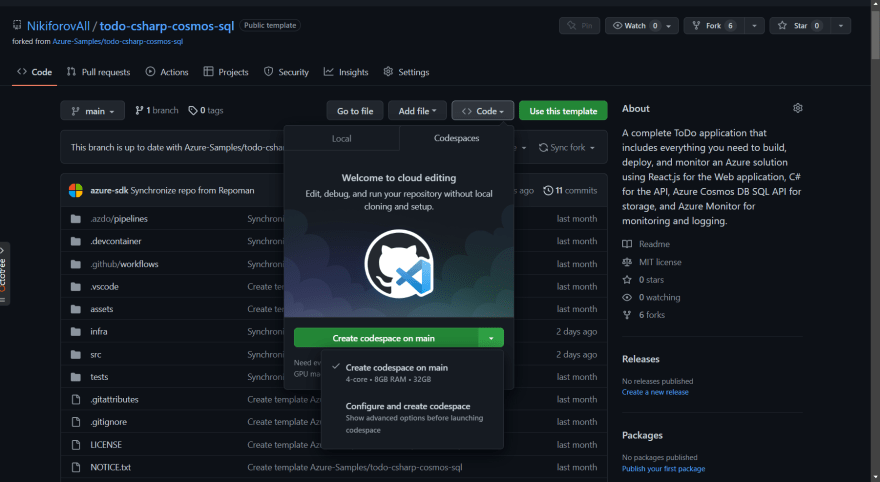 4️⃣ Login to Azure via CLI or VSCode extension: 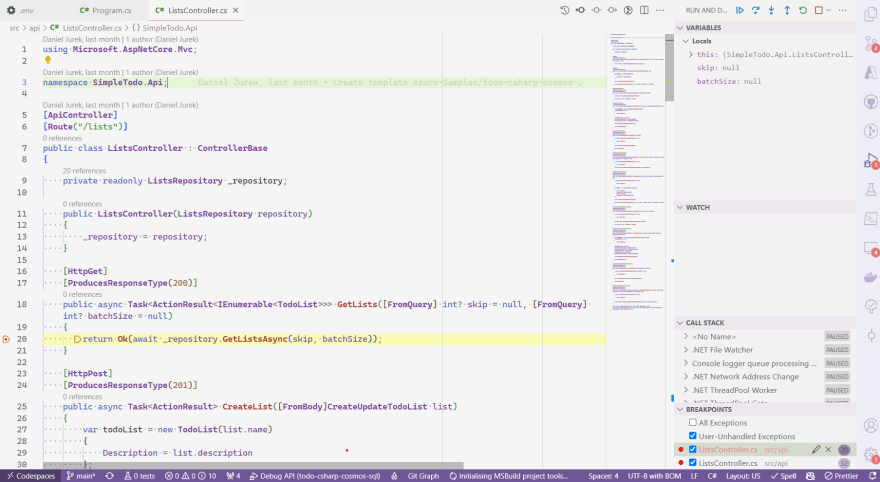 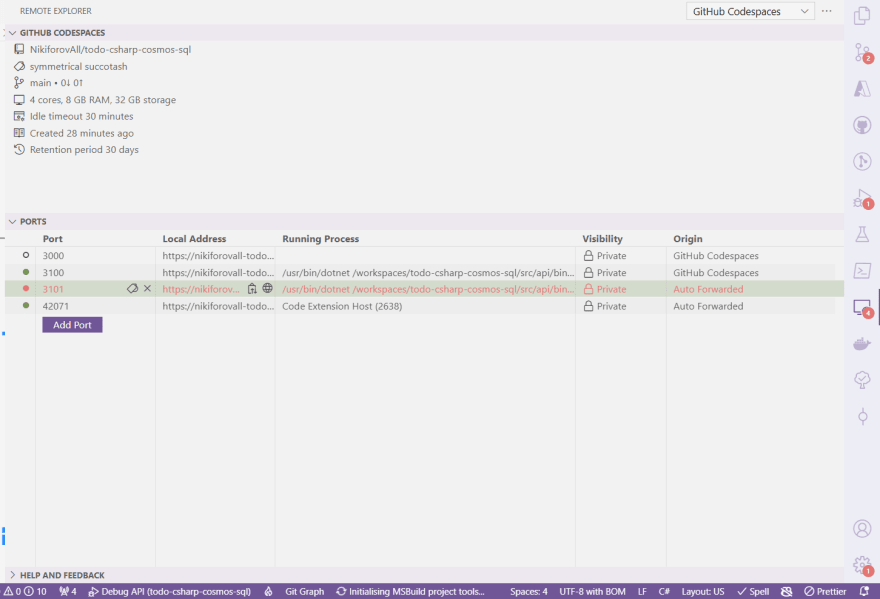 🔟 Tear down the dev environment in Azure azd down

As result we have:

DEaaS has lots of advantages. Most of the time it just works. But it definitely required investing some time to learn about the moving parts to know how to maintain and troubleshoot the setup. I have not shown you the dark side of using DevContainers but I can assure you that it could be hard to understand when something goes wrong. Despite all challenges, it opens new horizons and it is a future of large-scale and open-source development.

I asked 200 dev teams how well they work together. This is what I learned.

Once suspended, nikiforovall will not be able to comment or publish posts until their suspension is removed.

Once unsuspended, nikiforovall will be able to comment and publish posts again.

Once unpublished, all posts by nikiforovall will become hidden and only accessible to themselves.

If nikiforovall is not suspended, they can still re-publish their posts from their dashboard.

Once unpublished, this post will become invisible to the public and only accessible to Oleksii Nikiforov.

Thanks for keeping DEV Community 👩‍💻👨‍💻 safe. Here is what you can do to flag nikiforovall:

Unflagging nikiforovall will restore default visibility to their posts.