This is a guest post by krazzer presenting KikCMS , a CMS written in Phalcon and it is open source!

My name is Kaz van Wel. I’m a webdeveloper from the Netherlands. I started developing websites in PHP around 2004.

Since 2017, I started being self-employed full time. I build websites and web applications for companies. Every project has been build upon the KikCMS, which is build upon the Phalcon framework.<!--more-->

How and why it started

I’ve worked for an agency from 2005 until 2015. I was the lead developer of the CMS they are using. The main reasons we chose to build our own was to be more flexible. We wanted to have a CMS that could do anything (and was reasonable) the client asked for.

I started the development of their CMS in 2006. It had two major overhauls and the version they still use today stems from 2010. Also the design changed quite a bit in 2015, but technically and functionally didn’t change much.

A few years before I left the company, I really wanted to build a brand new version. The current version was build without a framework, and that caused a lot of problems and hurt productivity. Apart from that I knew that I couldn’t develop the CMS the way I envisioned it to be, with multiple people having a say in it.

So, after working 1,5 years at another company, tweakers.net, I decided to quit my job, and start my own company. I had this idea in my mind of building websites myself for my own clients in my own build CMS. I knew this was a tall order to fill, but I was bursting with so much motivation that I just felt like I had to do it.

So in 2017 I started for myself. With some luck, I quickly found a few projects I could work on. I had not started working on KikCMS yet, so I used an older version that I was using for personal projects. That version was a fork of what I had built in the past for another company. It looked like this:

As you can see, I had already named it KikCMS. It did was it was supposed to do, and although it looked nice on the outside, the code was a mess.

So in my mind I had a few ideas that my new CMS had to have:

Picking a framework, I already had Phalcon in my mind. The performance benefit really attracted me. I knew that choosing Symphony or Laravel would probably have more support and it would allow the CMS to be installed on more Hosting locations, but I still chose Phalcon. Mostly because I liked it, and I don’t know if other people will ever use my CMS so it would be silly to use a framework to serve people that might never exist.

So I started building it. Like crazy. I spend around 2-3 days a week solely on building the CMS. 9 months later, as if it were a pregnancy, the new KikCMS was born. In the months following I kept perfecting the CMS and I rebuild all projects I did into the new CMS. So all my clients got a free update, using KikCMS as their backend.

Now you might wonder, why build a CMS yourself in the first place? Why not use an existing one. Well, there are several reasons:

Firstly, I just dreamed about it for years, so the motivation to do it was insane.

Secondly, I think the UX design of almost all CMS (and most other web applications for that matter) are done very poorly. For editing data (which is mostly what CMS’s do) nobody uses modal windows. When you want to edit something you get pulled out of where you were, and it’s hard to go back to where you got from. This might not be that bad if you are tech-savvy, but most people are not. So I try to make it as easy as possible, even though I know this is more complex to develop.

So let’s give you an example. This is where you can edit your pages: 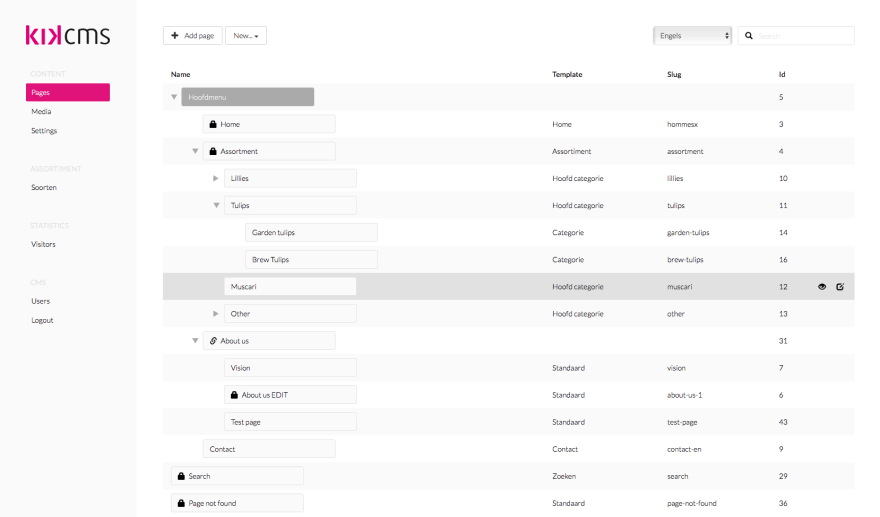 The pages have an hierarchy that is the same as on the website. You can drag and drop pages to change their location on the website easily. Now when you press edit, or double click a page, you can edit a page. 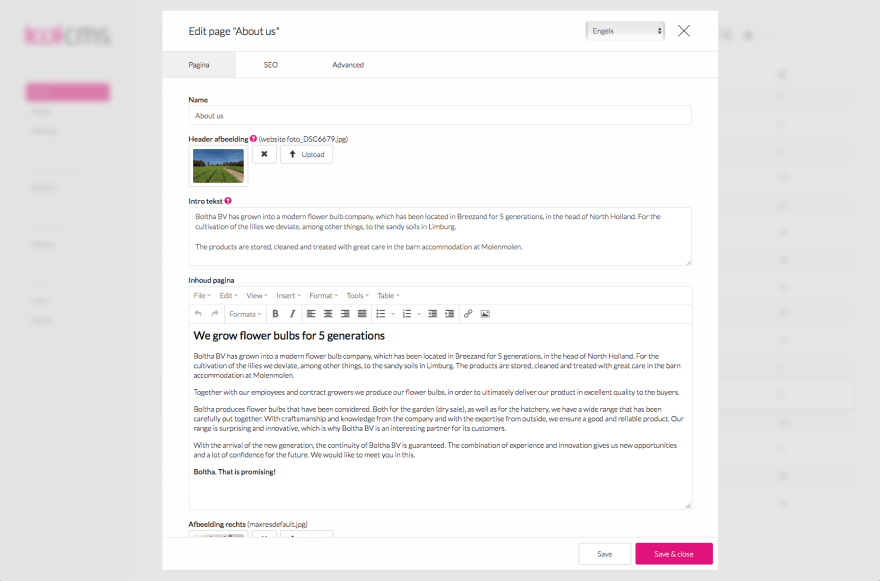 Now a model window pops up, where you can edit the page. So getting back to the point I made earlier, you are not taking out of context. You stay right where you are. This feels very natural. 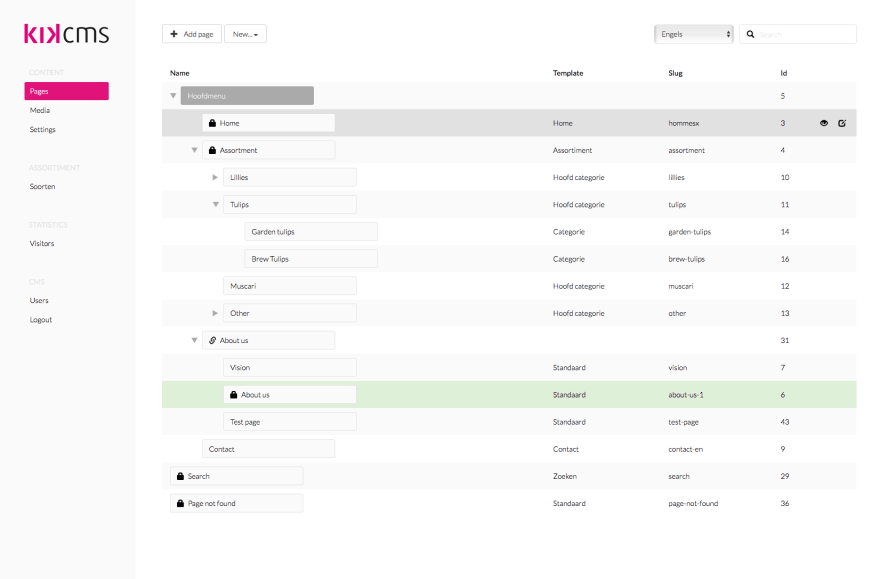 Now when you press save & exit, you get back to where you were, and the page you just edited is highlighted.

The cool thing is, this works the same throughout the whole CMS, for example in this webshop with a database of products: 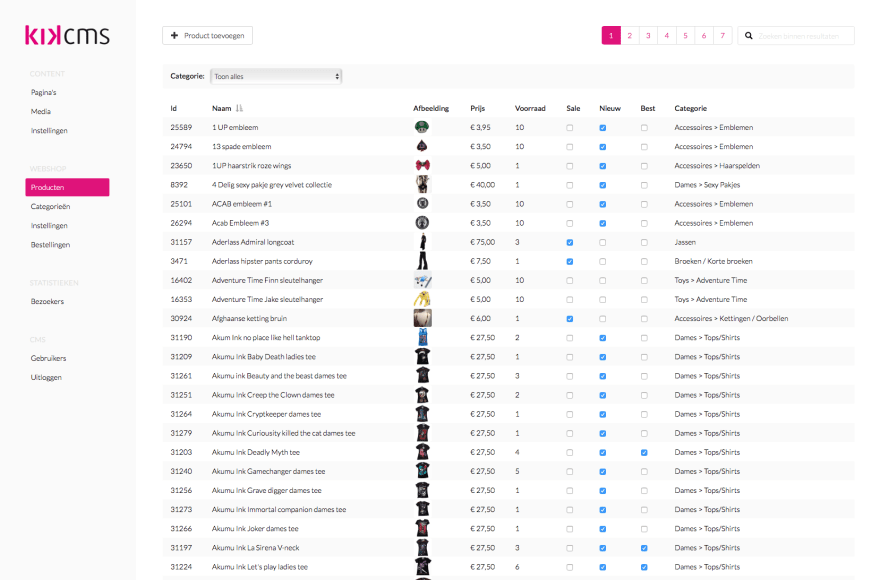 I also made a video that highlights the UX.

What’s even cooler, is that you can build these editable databases very easily yourself. As you can see in the tutorials, it’s very easy to create such a datatable with very few lines of code. Datatables are very powerful, they can:

When you create a form, you can add fields to edit a table’s field. For example, the name of a person, but you can also easily edit related values in a form. 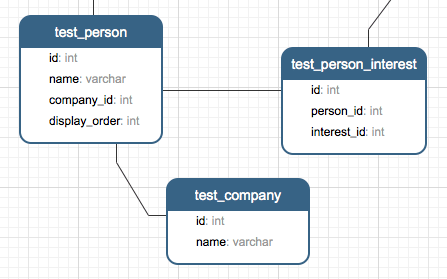 So you have a person, which has a name, a company, and several interests. To put this all in a single form, you must first define the relations, just like you are used to when using the Phalcon framework:

Now in the form, all you have to do is this: 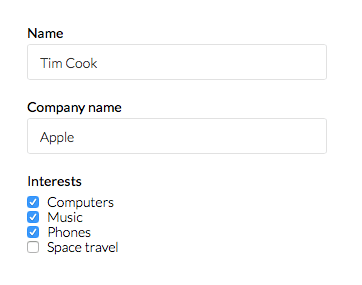 Now when you press save, your data will be saved like this:

So the KikCMS has 3 main advantages: Usability, performance and rapid development. To me, these are very important. To give you an idea of what the KikCMS is capable of, this is what I’ve developed with it in the last 2 years:

KikCMS works perfectly for my needs. However, I made it open source, in order to give back to the community, and perhaps help others that have the same or similar requirements.

You can check KikCMS here. Suggestions, comments and of course Pull requests are more than welcome! Do not forget to star the project on GitHub!

If you are interested in having your project showcased in the Phalcon Blog, feel free to contact us at team@phalcon.io or reach out in our Discord server.

Make your own color palette for next project!

How I built a Contentful App combined with Commerce.js (IV)

Once suspended, niden will not be able to comment or publish posts until their suspension is removed.

Once unsuspended, niden will be able to comment and publish posts again.

Once unpublished, all posts by niden will become hidden and only accessible to themselves.

If niden is not suspended, they can still re-publish their posts from their dashboard.