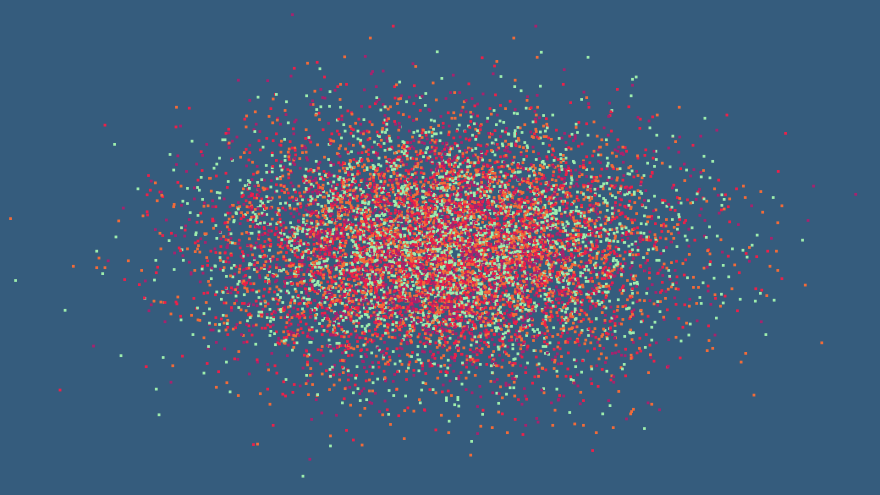 Earlier this week, I had released Virgo, a Ruby CLI to generate wallpapers (including the one above). My goal was to be able to create beautiful OLED wallpapers for my phone, but unfortunately, the first version of Virgo would take about 15 seconds to generate a wallpaper the size of an iPhone 11. The first version of Virgo used ChunkyPNG::Image to place pixels on the background, and the author of ChunkyPNG alludes to this possible problem in his README:

Also, have a look at OilyPNG which is a mixin module that implements some of the ChunkyPNG algorithms in C, which provides a massive speed boost to encoding and decoding.

My goal was to reduce the time to generate an iPhone-sized wallpaper (about 1200 by 2200 pixels) in under one second. I chose this constraint so that I can eventually write a web frontend in Sinatra. Users won’t wait 15 seconds for an image to be generated, especially if the file is being provided by a server without any loading indication on the page.

Thinking of a Solution

When thinking of optimization ideas, two options stood out to me from Willem’s README:

After some research into OilyPNG, I found that the functions I used with ChunkyPNG weren’t implemented in OilyPNG1, so I was left to find another library that enabled a faster manipulation of integer arrays. I knew that in the Python world, NumPy would be the immediate answer. After some research for a Ruby alternative to NumPy, I came across NArray, which appeared to be a solution others had relied on in the past. I alluded to this possible approach in my original post:

ChunkyPNG was used to manage and save the wallpaper images, and Commander enabled terminal argument parsing and help documentation. For optimization, I plan to use NArray for creating the pixel locations in the wallpaper and writing a custom PNG encoder.

After some profiling, the section of code that could be improved the most was overlaying pixels on the background image:

Rather than creating new ChunkyPNG::Images and overlaying them on a master Image, I decided to use a new data structure for the image. Instead, Virgo now uses an NArray to represent the image, where each item is the Integer representation of the pixel ChunkyPNG::Color. For every pixel, a portion of the array is replaced with the integer color:

Then, to create save a Wallpaper instance, a ChunkyPNG::Image is created by inserting rows of the NArray into the Image:

There was only one problem with this solution: the range of values for ChunkyPNG::Image would often exceed the range of the int type used by NArray. Therefore, most of the colors in the predefined themes could not be placed into the color map as-is.

I decided to implement a color hash (enum) for a Theme instance, where every key is a unique (low Integer value identifier), and each value is the (large Integer) ChunkyPNG::Image value. The background color (@background) will always have the identifier 0, and the foreground colors (@foregrounds) have identifiers from 1 to n. The color hash is created in Theme.initialize:

Therefore, if the Wallpaper map has the following values:

Next, we add a few helper functions to Theme for retrieving a random foreground (pixel) color and color keys/values:

And create_map is updated to use the color keys rather than the large values:

Now we can test whether using NArray vs ChunkyPNG::Image reduced the time to generate large wallpapers. 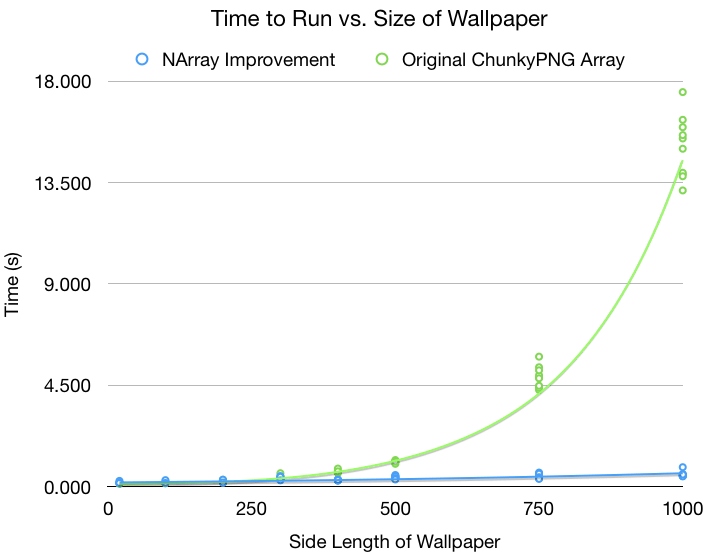 Note the exponential time complexity of the original implementation, and the linear time complexity.2 With 10 trials, NArray Virgo took 0.5 seconds on average to generate a 1000x1000 wallpaper, while the original implementation of Virgo takes 15.1 seconds on average. That’s a a 30x improvement! Even better, these updates will allow me to make a responsive Sinatra web frontend, without worrying about user retention or delays.

I believe more improvements could be made to Virgo, especially since I plan on writing a web frontend. In particular, I’ve added a Distribution class to enable both normal and uniform pixel distributions, but I have not added it as a feature to the CLI. Further, there is a new version of NArray called Numo::NArray that supports UInt64 values, so there will no longer be a need to map each color in a Theme to unique identifiers.

Virgo is available on my GitHub profile, and it’s open to pull requests! 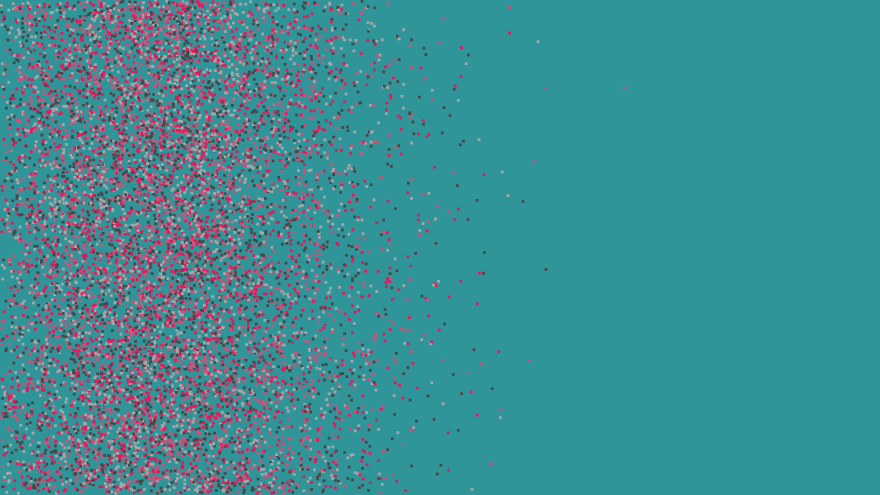 In fact, the library didn’t seem to have implemented much, if any, of the ChunkyPNG functionality. ↩

Well, O(n) at least comparative to the ChunkyPNG implementation and tests I conducted up to an image size of 5000x5000. ↩

Ruby gem for finding weekday of a date

Learn Ruby on Rails Best Practices With One Exercise