What is the point of all this software-defined infrastructure if you don't use it?

In prior examples, it's a fairly straightforward path to SDN when deploying NSX Data Center, allowing a VI admin or network engineer to deploy virtual network resources via a GUI.

This isn't the end of an effort, but the start of a journey. Once the API is available, deployment of services on top of a virtual cloud network become easier 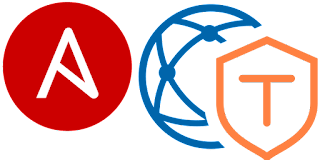 First, we need our CI tooling to be capable of leveraging VMware's NSX-T Community module:

Note: This requires Ansible 3.0 or higher to leverage the "Galaxy install from git+https" feature. This software package is not hosted on Ansible Galaxy

To an Ansible engineer, this part might be a bit bothersome. Since we're interacting with an appliance, there are several differences compared to canonical Ansible playbooks:

Now that we have the required software, the next step would be to map out what to build. Playbooks typically have documentation on what parameters it will accept to perform work. Example here.

Let's take what will probably be the most common deployment to automate - network segments:

When writing playbooks that will be frequently re-used, I like to leverage Jinja in the playbook, denoted by {{}} to morph to whatever need I have at the moment. Ansible supports loading _ variables _ with the --extra-vars "@{{ filename }}" statement:

I've glossed over a particularly important aspect of automation here - what credentials do we use?

Generally, I prefer to perform "hands-free" execution of aspects like this, so the provided playbook is designed to leverage the "Credentials as Environment Variables" feature in Jenkins automatically.

What I think of the Module

_ ansible-for-nsxt _ is a community maintained module, so expectations for the automation features should be set at the price paid for the software. I've tested this platform quite a bit, and the issues that I encountered appeared to be code obfuscation.

Digging deeper into the Ansible modules themselves, the biggest reason for this is NSX-T's declarative API - it makes more sense to not code those things at all and simply leverage the API. This resonates with me quite a bit!

VMware's community also has built testing into the repository, which seems to indicate that that testing is automated!

I do have two complaints about this module:

When looking to leverage automation at work, _ change safety _ is often provided as the primary reason not to do it.

It's okay not to trust automation with your production network, that's what testing is for.

When implementing an automation play like this in a production network, we need to evaluate whether or not it's safe to execute.

The first aspect to test when planning to automate a play will be _ idempotency _, or how executing a play should consistently cause the desired state defined in the playbook, and not to impact services unnecessarily (ex. by deleting and re-creating something).

Idempotency is extremely important with infrastructure, we can't afford downtime as easily as other IT professions. The good news is that it's pretty easy to achieve:

The second executed playbook should return a status of "_ ok " instead of " changed _".

If this test is passed, we'll evaluate the next aspect of idempotency by executing the playbook, then changing the segment's configuration in some way (GUI, API, Ansible playbook), and re-executing to ensure that the delta was detected by Ansible and can be resolved by it. I just create a second segment_vars_deviation.yml file and execute thusly:

This test should return "_ changed _" for all three attempts.

These two tests have extremely good coverage , indicating a high level of change safety for almost no effort. Additional tests to execute for a play like this can be mind-mapped or brain-stormed, and then coded from there. Here are some examples:

Starting with Ansible in Raspberry Pi

Once suspended, ngschmidt will not be able to comment or publish posts until their suspension is removed.

Once unsuspended, ngschmidt will be able to comment and publish posts again.

Once unpublished, all posts by ngschmidt will become hidden and only accessible to themselves.

If ngschmidt is not suspended, they can still re-publish their posts from their dashboard.

Once unpublished, this post will become invisible to the public and only accessible to Nick Schmidt.

Thanks for keeping DEV Community 👩‍💻👨‍💻 safe. Here is what you can do to flag ngschmidt:

Unflagging ngschmidt will restore default visibility to their posts.