In this blog, we are going to briefly see in detail about a set of commonly used, built-in directives in Angular. The topics we’re going to cover are listed below:

Directives are markers on a DOM element that tell Angular to attach a specific behavior to that DOM element or even transform the DOM element and its children. In short, it extends the html. For example, we can change the appearance or structure of a particular DOM element dynamically based on a specific condition. We’ll be seeing them in detail with examples in the below sections.

There are three types of directives:

Note: We will be covering only the commonly used built-in directives in this blog.

These are a special kind of directive that has their own template, which has a ‘@Component’ decorator . We can define a component view with its companion template. A template is HTML that tells Angular how to render the component. Whenever we create a component, that is nothing but a directive. And we all know that Angular is all about components. And each component consists of a HTML template , CSS and TS file.

For example, in the root component below ,we have used the @Component decorator here to define a component. 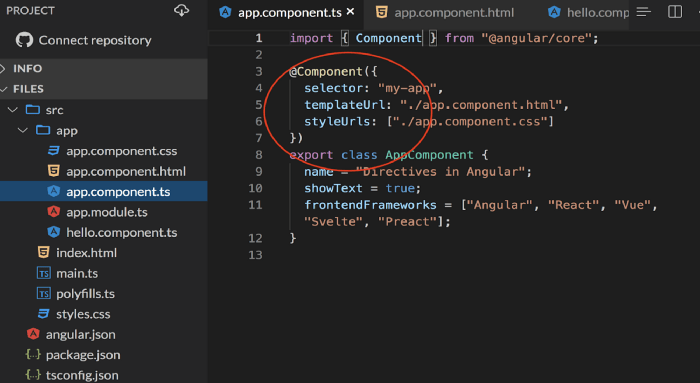 In the below example, we have assigned a boolean variable to the *ngIf directive. If the return value is true, then that particular div with text ‘Yes, I can be seen’ will be rendered in the browser.

Using *ngIf dynamically renders text on the page based on a given condition.

Another commonly used structural directive is *ngFor. The *ngFor directive is used to output an array of data onto the page.

As you can see, we have used the ngFor directive to loop over the frameworks array to display each value.

In the example below we have used the directive ngStyle to give the element a background color, padding and font size.

Next, in the example below we have used another attribute directive ngClass. As you can see in the template file, we have added ngClass and defined some stylings for that class as shown in the css file.

Now those specified styles will be added on those elements which are wrapped using that class.

In conclusion, you now have a basic understanding of the 3 types of directives in Angular as well as some of the built-in directives and how they are used.

ng-conf: The Musical is coming

ng-conf: The Musical is a two-day conference from the ng-conf folks coming on April 22nd & 23rd, 2021. Check it out at ng-conf.org

Thanks to Erik Slack and Preston Lamb.

The new RouterOutlet events in Angular 13