Java has long been infamous for its NullPointerException. The reason for the NPE is calling a method or accessing an attribute of an object that has not been initialized.

Running this snippet may result in something like the following:

At this point, you have no clue which part is null in the call chain: foo, or the value returned by getBar() or getBaz()?

In the latest versions of the JVM, the language designers improved the situation. On JVM 14, you can activate "helpful" NPEs with the -XX:+ShowCodeDetailsInExceptionMessages flag. Running the same snippet shows which part is null:

On JVM 15, it becomes the default behavior: you don't need a specific flag.

In the above snippet, the developer assumed that every part had been initialized. Displaying the null part helps debug and debunk wrong assumptions. However, it doesn't solve the root cause: we need to handle the null value somehow.

For that, we need to resort to defensive programming:

It fixes the problem but is far from the best developer experience - to say the least:

On the JVM, Scala's Option was the first attempt that I'm aware of of a sane null handling approach, even if the concept is baked into the foundations of Functional Programming. The concept behind Option is indeed quite simple: it's a wrapper around a value that can potentially be null.

You can call type-dependent methods on the object inside the wrapper, and the wrapper will act as a filter. Because Option has its methods, we need a pass-through function that works on the wrapped type: this function is called map() in Scala (as well as in several other languages). It translates in code as:

If the wrapper is empty, i.e., contains a null value, return an empty wrapper; if it's not, call the passed function on the underlying value and return a wrapper that wraps the result.

Since Java 8, the JDK offers a wrapper type named Optional. With it, we can rewrite the above null-checking code as:

If any of the values in the call chain is null, option is null. Otherwise, it returns the computed value. In any case, gone are the NPEs.

Regardless of the language, the main problem with Option types is its chicken-and-egg nature. To use an Option, you need to be sure it's not null in the first place. Consider the following method:

What happens if we execute this code?

At this point, developers enamored with Option types will tell you that it shouldn't happen, that you shouldn't write code like this, etc. It might be accurate, but it, unfortunately, doesn't solve the issue. To 100% avoid NPEs, we need to get back to defensive programming:

Kotlin chose another route with nullable types and their counterparts, non-nullable types. In Kotlin, each type T has two flavors, a trailing ? hinting that it can be null.

The Kotlin compiler knows about it and prevents you from directly calling a function on a reference that could be null.

The above snippet throws an exception at compile-time, as the compiler cannot assert that nullable is not null:

The null safe operator, i.e., ?., is very similar to what map does: if the object is null, stop and keep null; if not, proceed with the function call. Let's migrate the code to Kotlin, replacing Optional with a null safe call:

You have no choice if you're using a language where the compiler does not enforce null safety. The question raises only within the scope of languages that do, e.g., Kotlin. Kotlin's standard library doesn't offer an Option type. However, the Arrow library does. Alternatively, you can still use Java's Optional.

But the question still stands: given a choice, shall you use an optional type or a nullable one? The first alternative is a bit more verbose: 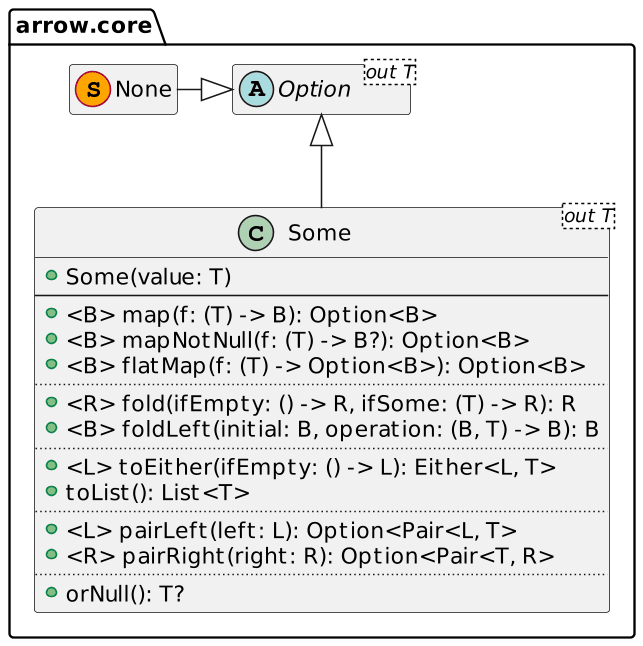 For example, fold() allows to provide two lambdas, one to run when the Option is Some, the other when it's None:

If null was a million-dollar mistake, modern engineering practices and languages could cope with it. Compiler-enforced null safety, as found in Kotlin, is a great start. However, to leverage the full power of Functional Programming, one needs an FP-compliant implementation of Option. The problem, in this case, is to enforce that Option objects passed are never null.

Kotlin's compiler does it natively, while the Arrow library provides an Option implementation that fulfills the needs of FP programmers.

Originally published at A Java Geek on April 3rd, 2022