It's been said that there are two things hard in software development, naming things and cache invalidation (while some add off-by-one errors to the mix). I believe that keeping the cache in sync with the source of truth might count as a third one. In this post, I'd like to tackle this issue, describe the ideal situation - 1 cache, 1 datastore, describe the problem of having multiple components that can write to the datastore, list all possible solutions, and describe one elegant solution based on Change Data Capture and Jet.

In a system, to improve performance, one of the first short-term measures is to set up a cache. It's a tradeoff between getting the data faster at the cost of the data being not that fresh: one loads the data in-memory close to the consumer, and presto, one gets an instant performance boost. In regard to a database, this is akin to the following: 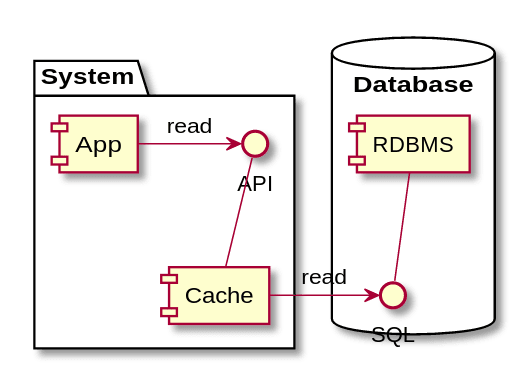 In this read-through design, when the app requires an item, the cache first checks whether it has it. If yes, it returns it. If not, it fetches it from the underlying Relational Database Management System, stores it, and returns it. For a write, it stores it, and also calls the RDBMS to store it.

Note that using a cache-aside design instead of read-through would have the same issue. The only difference would be the fact that the app would be responsible for the fetching/storing logic instead of the cache.

The RDBMS is the sole source of truth - as it should be. Since the cache intercepts write statements to the RDBMS, it's a mirror of the data.

This design works as expected until the database receives updates from another source: 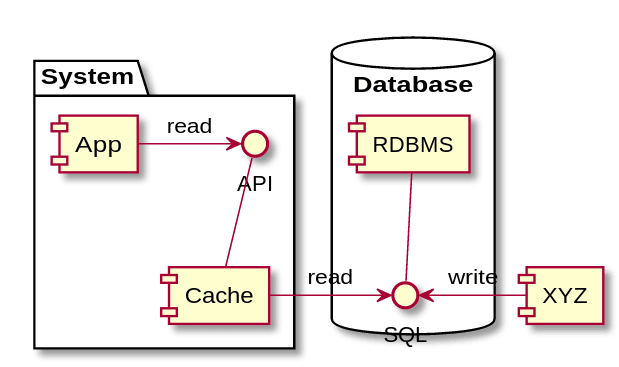 There are multiple ways to cope with this issue.

Since the cache only queries the RDBMS if it doesn't store the requested item, let's remove items after a specific time. This is a built-in feature in enterprise-grade caches such as Hazelcast IMDG, and it is known as the Time-To-Live. When an item is stored, a TTL can be attached to it. After that time has elapsed, the item is removed from the cache, and it will be fetched from the RDBMS again if needed.

This approach has a couple of downsides:

With longer TTL, we avoid unnecessary round trips but return more stale data. With shorter TTL, we waste resources with lesser chances of stale data.

Because the TTL doesn't seem to be the right approach, we could devise a dedicated component that watches the RDBMS by regularly sending queries to it and updating the cache accordingly.

Unfortunately, this strategy incurs the same issues as cache invalidation: the more frequent the queries, the more chances to catch changes, but the more resources are wasted. Worse, this also will put extra load on the RDBMS.

A common downside of the above approaches is the way they both poll the database. Polling happens with a specific frequency, while writes don't follow any regular periodicity. Thus, it's not possible to make the two match.

Instead of polling, it would make much more sense to be event-driven:

In RDBMS, this event-driven approach is implemented via triggers. Triggers are dedicated stored procedures that are launched in response to specific events, such as an INSERT or an UPDATE.

That works pretty well when the acted-upon object is inside the database e.g. "when a record of table A is updated, then add a record to table B". For our use-case, where the acted-upon object is the cache, which sits outside the database, it's not as simple. For example, MySQL allows you to make an external system call from a trigger. However, this approach is very implementation-dependent and makes the overall design of the system much more fragile. Also, only some RDBMS implement triggers. Even if they do, there's no standard implementation.

[...] a set of software design patterns used to determine and track the data that has changed so that action can be taken using the changed data.

CDC is an approach to data integration that is based on the identification, capture and delivery of the changes made to enterprise data sources.

In practice, CDC is a tool that allows to transform standard write queries into events. It implements it by "turning the database inside-out" (quote from Martin Kleppmann). This definition is because a database keeps a record of all changes in an implementation-dependent append-only log. Regularly, it uses it to manage its state. Some RDBMS also have other usage e.g. MySQL uses the log for replication across nodes.

For example, here's a sample for MySQL binlog:

A CDC component connects to this immutable log to extract change events.

One can view CDC as the opposite of Event Sourcing: the latter captures state by aggregating events, while the former extracts events "from the state".

CDC is quite recent, and hasn't had time to mature. As such, there's no universal standard, but specific tools. In this section, we are going to have a look at Debezium. Debezium is an Open Source set of services for CDC provided by Red Hat.

While Kafka is a great technology, and probably also quite widespread nowadays, data in Kafka needs to be persisted to disk. The benefit of persistence is that data survive even in the event of the cluster going down. The tradeoff, however, is that the access time of disk-persisted data is one (or 2) orders of magnitude slower than the access time of in-memory data, depending on the underlying disk technology.

Hazelcast Jet is a distributed stream processing framework built on Hazelcast and combines a cache with fault-tolerant data processing. It has sources and sinks to integrate with several file, messaging and database systems (such as Amazon S3, Kafka, message brokers and relational databases).

Jet also provides a Debezium module where it can process change events directly from the database, and write them to its distributed key-value store. This avoids having to write the intermediate messages to Kafka and then read again to be written to a separate cache.

It’s (finally!) time to assemble all the previous bits together. Here are the components and their responsibilities: 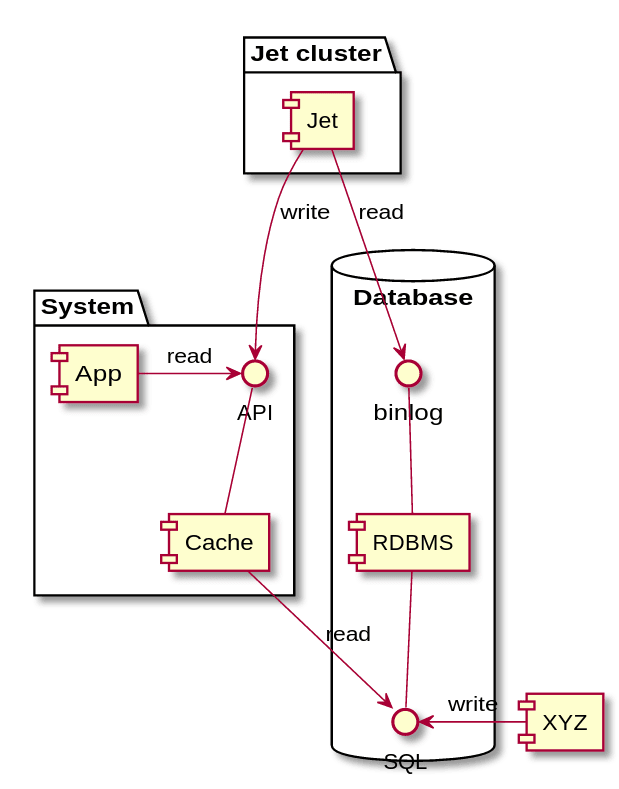 Note that this architecture assumes one starts from a legacy state, with an existing app that uses caching, where later on a new component was set up that could update the database.

If one starts from scratch, it’s possible to simplify the above diagram (and associated code) as Jet embeds its own Hazelcast instance. In that case, instead of Jet being a client of a third-party Hazelcast instance, Jet is the one to configure and start the instance. Obviously, it also can then get/put data.

Talk is cheap, show me the code

The repository is made of the following modules:

The pipeline definition is quite straightforward:

To try the demo, a local Docker daemon must be running.

Caching is easy if the cache is the only component that writes to the database. As soon as other components update the database, no traditional strategy to keep the data of the database and the cache in-sync is satisfying.

The Hazelcast Jet streaming engine, using Debezium under the hood, is able to leverage Change Data Capture over traditional RDBMS to achieve an evergreen cache in a simple way.

How to store raw values with Rails.cache