React is one of the most popular web frameworks out there. It has been growing steadily in popularity for years, passing Angular for the first time in the 2019 Stack Overflow developer survey.

This post will show you how to create your own React website in just a few minutes. If you're interested in learning more after completing this tutorial, checkout the Beginning React course I just created on Next Tech to further improve your React skills.

For now, let's dive right into building a website with React!

To complete these steps you'll need to have the Node Package Manager (npm) installed. If you don't have it installed yet, head on over to https://www.npmjs.com/get-npm to download and install npm.

This will also install npx which we'll use to run create-react-app.

Create React App is an excellent way to quickly get a React website up and running. Create React App was created by Facebook (the same company that created React!). In their docs, they describe it as:

Create React App is an officially supported way to create single-page React applications. It offers a modern build setup with no configuration.

Knowing that Create React App is supported by the creators of React is a huge plus. Let's use it to get started with our website!

Run the following command to create your site:

Note that it may take a couple minutes for this command to complete.

Next, run the following commands to start the React development server:

Now, let's make a change to update the site. Open the hello-react/src/App.js file, then replace the following line:

If you open the web page again you'll see that it updated without you having to refresh the page! Live reloading is one of the awesome features that Create React App configures for you. 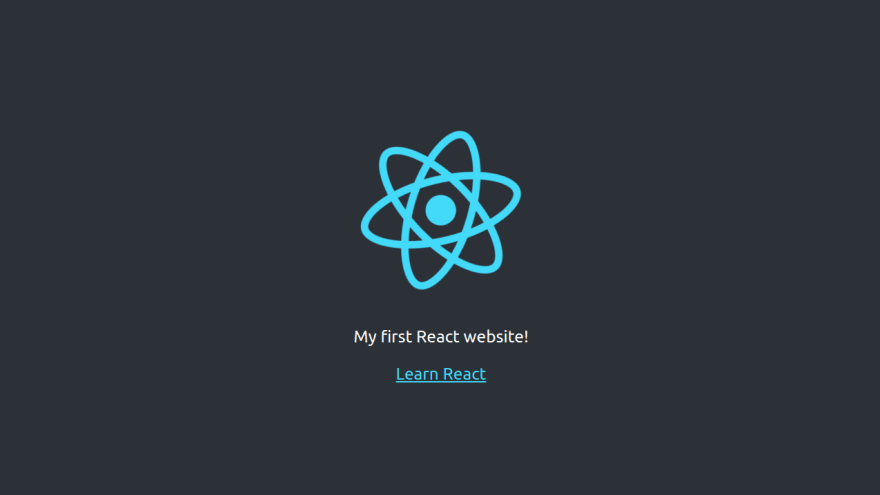 Next, we'll create a new React component. First, create a folder in the src folder named components. Then create a file called HomepageImage.js in the src/components folder. This file will hold our new homepage image component.

We'll create this component by adding the following code to the HomepageImage.js file:

Then, in App.js, replace

We also need to import the component at the top of App.js by adding the following code to the top of the file:

Since we removed the image of the React logo, you can then remove this import for the logo as well:

Now, open http://localhost:3000 again in your browser. If everything is working, you should see the following page: 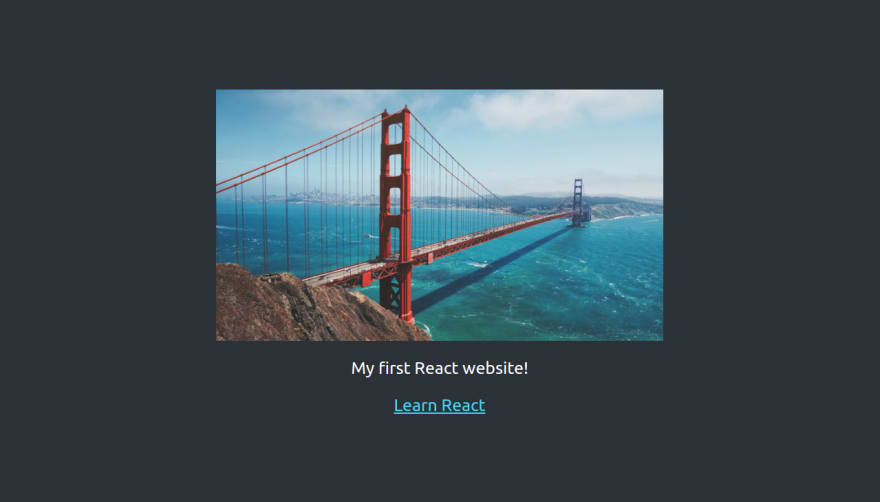 This tutorial was a quick introduction to creating web pages with React. If you want to gain a better understanding of React so you can build awesome sites using it, checkout the course I just released that teaches React!

Have you built a site with React? Feel free to share your URL or a link to your project on GitHub in the comments below to show it off!

Special thanks to Maarten van den Heuvel for taking the photo of the Golden Gate Bridge used in this post!

CRA is good for bigger projects too, definitely well-suited to more than just toy/learning apps. If you're only gonna use a tool once or twice though, yeah, npx is awesome.

On the other hand... here's a quick test of running npx create-react-app a few times (not actually creating an app, literally just printing the help text):

Brighton Dube
Brighton Dube
I'm a budding web developer. I am particularly interested in the Javascript based tech stacks like MEAN, MERN, MEVN. I have worked with the LAMP stack before and I enjoyed it!
• May 20 '20 • Edited on May 20

Hi Dave, I use Windows 10, WSL, and VS Code for development. I have one problem with using npx, I have seen a few other people raise that issue on Github and SO but there seems to be no answers. When I run $npx create-react-app I always get this warning :

You are using npm 3.10.10 so the project will be bootstrapped with an old unsupported version of >tools.

Please update to npm 5 or higher for a better, fully supported experience.

Clearly I have a higher version of npm installed than what CRA is telling me!
The only solution I ever found was to install CRA globally or to use yarn.
However, I don't understand what is causing this, I have an open issue on the react repo and no answers, I looked at similar issues, there were no solutions to this particular problem!

After the installation is done I get :

Note: the project was bootstrapped with an old unsupported version of tools.
Please update to Node >=8.10 and npm >=5 to get supported tools in new projects.

Once unpublished, this post will become invisible to the public and only accessible to Andrew Sverdrup.

Thanks for keeping DEV Community safe. Here is what you can do to flag nexttech: