Microsoft calls it “Hybrid Windows for a hybrid world”, its newest offering Windows 365 Cloud PC promises to adapt to the needs and demands of a world in which it is increasingly common to work with distributed and/or hybrid teams. However, is it really the best option for developers seeking a virtual experience catering to their needs?

To answer this, let’s start with the obvious question.

It allows users to stream their Windows desktop, including apps, settings, and all content from the Microsoft cloud to any device. These cloud-based desktops come with all the features and benefits of the native Windows OS.

In this case, the term “cloud PC” refers to a scalable virtual machine that offers the complete Windows desktop UI/UX remotely, accessible via any device from any location.

Windows 365 certainly has the potential to reorient personal computing as we know it. In a world that has adopted hybrid and remote work models at breakneck speed, this tool enables the ability to work anytime, from anywhere while accessing a sophisticated OS in its entirety. Since Windows 365 can be streamed on any device, it further breaks down barriers to adopting unified work tools across teams and companies.

The ability to access familiar, easy-to-use, and available tech from every device is bound to accelerate work productivity and efficiency.

However, Windows 365 is not without its limitations, especially for developers. A few of the most significant ones:

Windows is not Linux

Why do we feel the need to repeat this extremely obvious statement?

It’s because, while Windows is lauded by end-users around the world, developers prefer Linux. There are many well-founded reasons for this, a couple of which are:

Given its many advantages, isn’t it fair that developers be able to access the Linux OS virtually without having to install, set up, containerize and configure anything, the same way they can with Windows via Windows 365?

An unambiguous Linux 365 - on the Cloud

We Neverinstall we are always trying to improve the end-user experience. To help developers minimize effort and boost productivity, we now offer access to a completely functional Linux OS - on the cloud - via their browser.

In other words, signup and login to Neverinstall, launch a browser/app/devtool on our UI, and you will see that it initiates on a virtual Linux instance. 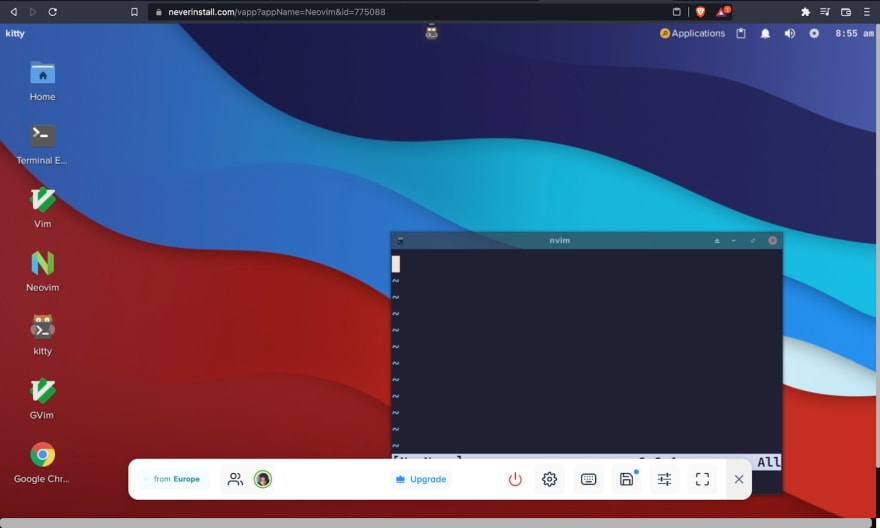 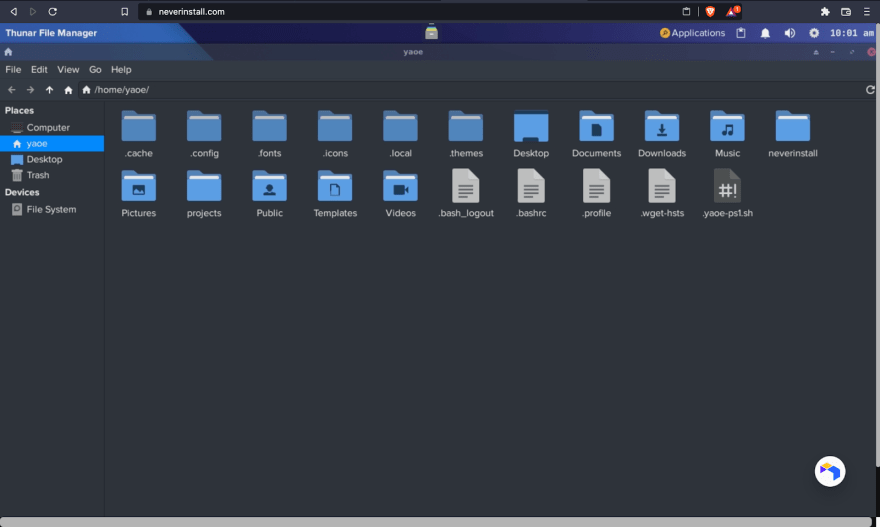 With Neverinstall, you get access to a complete Linux desktop, along with all core functions and attributes of Linux, without having to download, install, configure or set up anything. You simply need a browser and a functional internet connection to access Neverinstall.

In other words, you can transform your browser into a Linux OS.

Suggested read - Why your browser is becoming an OS

However, it wouldn’t be a true Linux experience without offering a great degree of control over customizations to cater to individual needs. On Neverinstall, users can customize every aspect of the OS as they see fit, just as they would be able to do if they installed Linux on their local machine.

The Neverinstall platform is equipped to leverage Xfce enabling users to fully edit and reorient the OS as they require - dimensions, shapes, sizes, design elements, and the like. 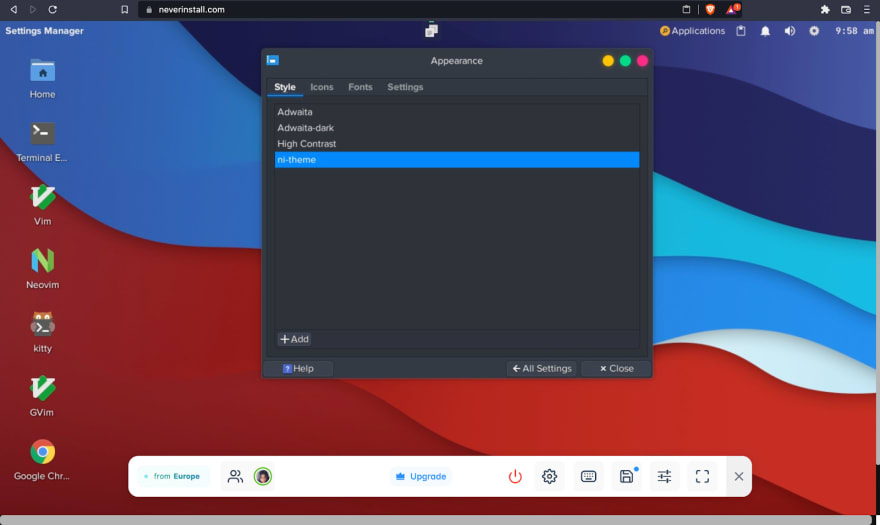 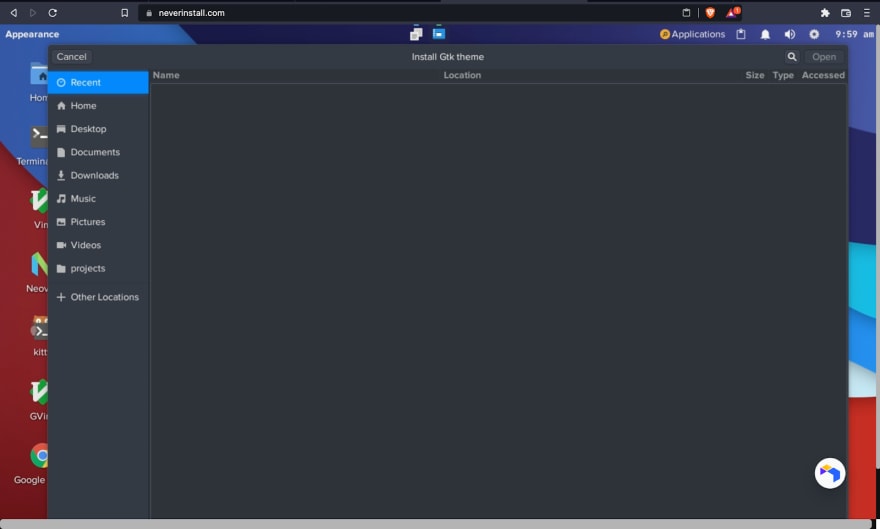 All users are free to download and install any apps, projects, and videos within their cloud PC.

On Neverinstall, the entire Linux OS has been uploaded to the cloud in the form of a web app. Therefore, the heavy lifting involved in using devtools like VS Code and Android Studio, as well as compiling, rendering, and running code is performed entirely by a cloud-based remote server - and the entire experience is streamed to your screen at 1Gbps.

In other words, you no longer have to start building your dev stack from scratch.

That means, you could create, run and test code on something as basic as a Google Chromebook, as long as you are logged into Neverinstall. You do not have to invest in hardware upgrades in order to experience effortless development.

In line with our mission to make development as effortless as humanly possible, especially on the cloud, Neverinstall offers a range of commonly used devtools you can access in real-time via your browser. Again, simply login to Neverinstall, and you can choose to launch tools like VSCode, Jupyter, Eclipse, Android Studio, PyCharm, and more. No installation or setup is necessary.

Suggested read - Application streaming: Where it has taken us

When using Neverinstall, developers get access to a fully-built and robustly-functional Linux OS available in a few clicks, devs can cut down significantly on setup time and effort. They also get access to popular devtools directly on the cloud, reducing time consumption even further. Jump right into collaborative coding, with a browser, the internet, and all the imagination you can muster.

Author: Shreya Bose
Shreya is a seasoned tech writer. Apart from technology, she has written about healthcare, heavy metal, alcohol, and coffee. When she is not writing, she is reading, drinking tea, and waiting for naptime.

How to Install Graph CLI On Ubuntu

Neverinstall
All your favourite IDE's now available on the cloud

Neverinstall gives you an uninterrupted development experience and improved accessibility, allowing you to code faster, better and on-the-go on your favourite IDEs like Android Studio, VS Code, Jupyter, PyCharm, IntelliJ using your browser.

Once suspended, neverinstall will not be able to comment or publish posts until their suspension is removed.

Once unsuspended, neverinstall will be able to comment and publish posts again.

Once unpublished, all posts by neverinstall will become hidden and only accessible to themselves.

If neverinstall is not suspended, they can still re-publish their posts from their dashboard.

Once unpublished, this post will become invisible to the public and only accessible to Abhishek.

Thanks for keeping DEV Community 👩‍💻👨‍💻 safe. Here is what you can do to flag neverinstall:

Unflagging neverinstall will restore default visibility to their posts.