At Neverinstall, we always try to improve our product and regularly engage with users from diverse backgrounds to get valuable feedback. In this article, we would like to introduce Aditya Thakur. He is a Developer Advocate for 100ms and runs a successful Discord community with over 1000 developers.

Try VS Code on Neverinstall here.

Aditya is a public speaker and runs a YouTube channel, covering topics around the software development landscape. So we deemed it fit to ask him to try our product. Earlier this month, we reached out to Aditya to compare his experience of using Flutter on VS Code on his native machine with the experience on Neverinstall.

This exercise aimed to understand how well our platform can replace the local installation of IDEs and code editors for a user and which use case the platform best serves a user.

Here are Aditya’s views on the platform and what he loved about it.

One of the aspects brought to our attention was the setup of the code editor, i.e., VS Code. When we built our platform, this was always one of our primary focuses, where we wanted to reduce the complexity and duration of setup for IDEs and code editors. 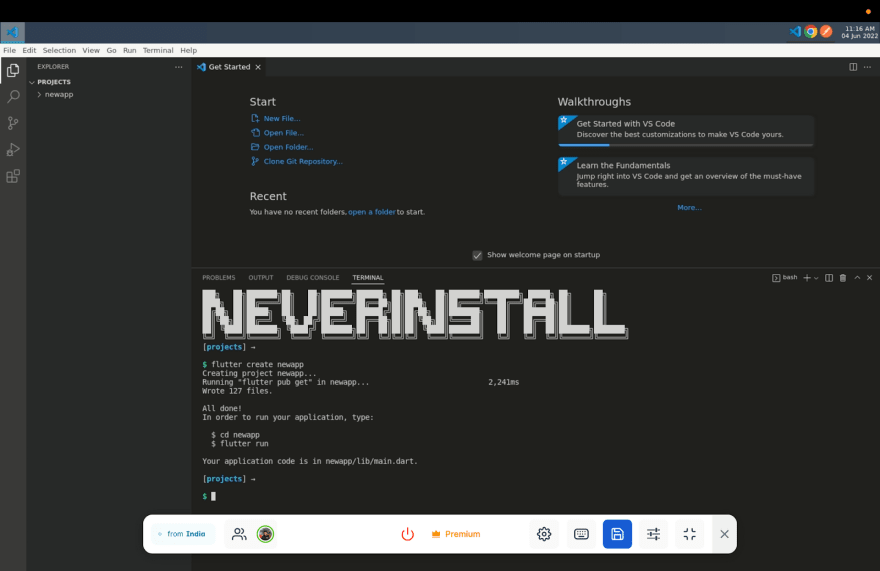 Aditya found the setup of the VS Code and Flutter easy and effortless. The platform only requires users to launch the code editor and select the development kit, in this case–Flutter, and the pre-configured and pre-installed application begin to run.

Developers do not need to download or install a code editor or a dev kit on their local machine and can simply log in to the platform to get instant access.

VS Code started pretty quickly as compared to the local machine. The Flutter installation and the required IDE setup would have taken time on the native machine. However, it took only a few clicks to select VS code, choose the Flutter development kit, and get started with the project.

Aditya noted that creating a new project in Flutter was also a charm. He created a project by running the command – flutter create newapp – getting him started with his development exercise roughly 2 seconds from launch.

The primary role of a development environment is to help write code, and at Neverinstall, we are trying to bring that experience closer to a native machine as much as possible. With ultra-low latency and faster setup times, we are trying to deliver the best experience to developers. Here is Aditya’s experience writing code on the platform. 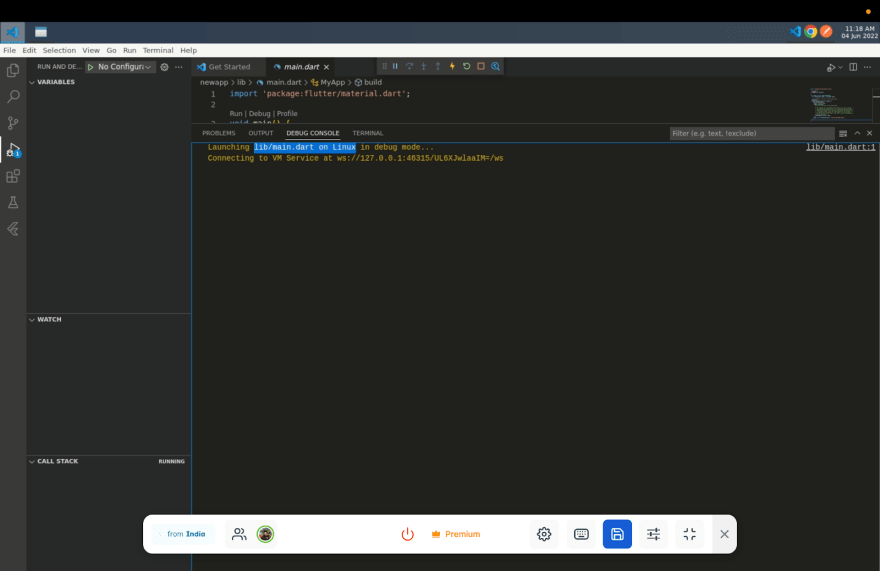 Since a large number of developers are familiar with the Linux operating system, we choose it to be the backbone of our platform. When Aditya set up his dev environment on our platform, he found that VS Code running as a Linux app delivered a very familiar approach, allowing him to code even on the cloud comfortably.

Neverinstall allows users to share their workspace with other users to work on the same project, browse together and even watch something together. This is one of the things we wanted Aditya to review for us from a coding perspective. He noted that collaborating with the other users was easier over the cloud, allowing different developers to work on the same project in real-time.

Since the same instance is shared with a user, code reviews also become easier. Aditya noted that review code within the instance of the developer was made possible through the platform, preventing the need to move the code to a repository.

One of the use cases that set Neverinstall apart for Aditya was our ability to carry an entire personal computer on the cloud. Since users can log in to the platform from anywhere and using any device, developers can use the platform to code from anywhere.

Mobility is a big win for Neverinstall since it allows users to take their workspace and dev environments anywhere with them, even on their phone or tablet with the same native desktop experience, and code from virtually any place on the planet with an internet connection.

Here is how Aditya summed up his overall experience using Flutter on VS Code with Neversintall.

Using VS Code with Neverinstall was great, and the performance of the code editor was fairly good, considering it is streamed over the internet. The platform allows users to take their work anywhere and even switch devices without the need to download or install IDE repeatedly.

The project was running on the latest version, which goes to say that all the updates and upgrades for IDEs and dev kits are handled on Neverinstall’s end, further reducing efforts for developers.

I recommend Neverinstall for developers who regularly travel and have to move around with their work often.

Suggested read - Application streaming: Where it has taken us

How to Programmatically Scrolling to the End of a ListView in Flutter?

Oh my posh on all windows terminals (vs code integrated terminal too!!)

Show time: Malibu, A retro VS Code theme inspired by the surfing days in Malibu beach.

Neverinstall
All your favourite IDE's now available on the cloud

Neverinstall gives you an uninterrupted development experience and improved accessibility, allowing you to code faster, better and on-the-go on your favourite IDEs like Android Studio, VS Code, Jupyter, PyCharm, IntelliJ using your browser.

Once suspended, neverinstall will not be able to comment or publish posts until their suspension is removed.

Once unsuspended, neverinstall will be able to comment and publish posts again.

Once unpublished, all posts by neverinstall will become hidden and only accessible to themselves.

If neverinstall is not suspended, they can still re-publish their posts from their dashboard.

Once unpublished, this post will become invisible to the public and only accessible to Nilay Jayswal.

Thanks for keeping DEV Community safe. Here is what you can do to flag neverinstall:

Unflagging neverinstall will restore default visibility to their posts.