What is an encoding? Part 2

In part 1 we demystified the following ways the term "encoding" is used:

In part 2 we'll address the remaining ways "encoding" could be used:

This statement deals with several different concepts. I'll start by going over the types of encoding.

Wait, what? That was a nebulous distinction you say? Okay, let me try to explain it in a different way. A character encoding like ASCII is really good for data storage and transmission. For example, say you're writing a speech. You want to save it on your computer so you don't have to re-type it every time. The computer stores that speech as a bunch of 1s and 0s. ASCII is needed to translate those bits back into the words, letters, and punctuation that make up the speech. In the same way, say you want to upload the speech to the cloud. The exact same process is needed to transport that speech over the Internet.

Base64 is an example of a binary-to-text encoding. In fact, it's pretty much the only one in use, much like UTF-8 is for character encodings on the web. It is a subset of ASCII, containing 64 of the 128 ASCII characters: a-z, A-Z, 0-9, +, and /. It doesn't contain characters like NUL or EOF (which are examples of non-printable characters). Base64 is often used to translate a binary file to text, or even a text file with non-printable characters to one with only printable characters. The benefits of this are that you can output the contents of any type of file, no matter what data it contains. It doesn't have to be limited to a file either; it can be just a string, such as a password. Also, you are guaranteed to always have characters that can be displayed, no matter what the underlying bits are. That is something UTF-8 cannot accomplish. How does Base64 do it?

Let's show this on the command line with a new file, file3.txt:

This is what the file looked like in VSCode using a UTF-8 encoding before being overwritten with the printf '\xff' | dd... command: 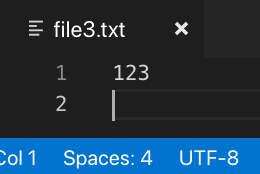 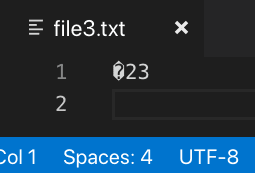 As mentioned before, Base64 can always display printable characters, even when UTF-8 cannot. Let's see that in action:

And now the file has printable characters: 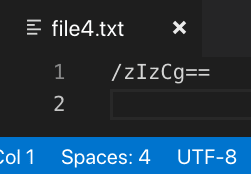 Okay, great. But how did we end up with /zIzCg==? I'll take this one step at a time to avoid confusion.

Base64 has 64 characters in its alphabet. That means it only needs 6 bits to represent the whole alphabet (26 == 64). UTF-8 uses the leading bits in a byte as metadata to determine whether it's a starting byte or a continuation byte. Those bytes don't hold any information about the character being stored (i.e., the actual data). In contrast, Base64 uses the entire byte as data. It has no metadata. However, as I mentioned it only uses 6 bits. A byte has 8 bits. How does this math line up?

Let's start by examining the Base64 table, which looks very similar to the ASCII table: 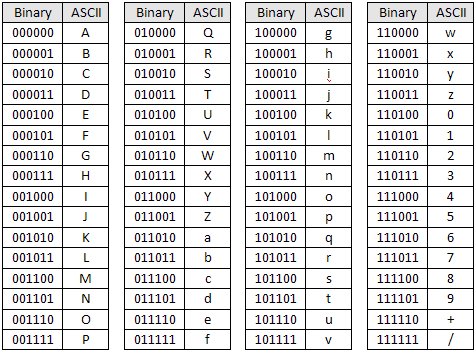 The first 5 groupings of 6 bits line up perfectly with the first 5 characters of our Base64 encoded file4.txt. But we only have 2 bits remaining at the end, which is not enough to make a valid character in Base64. file3.txt had 4 bytes, which is 32 bits. 32 is not divisible by 6.

That's much better. Now the first 6 characters match. But what about the == at the end? We have no bits remaining. In fact, = isn't even in the Base64 table! What gives?

Base64 requires that the number of characters outputted be divisible by 4. This means that those = are padding characters to satisfy that requirement. But why does that requirement exist? Well, let's hypothesize a bit here. Base64 characters use 6 bits each. A byte uses 8 bits. Bytes are fundamental building blocks in a file system. We don't measure things in bits, but rather in bytes. So how many Base64 characters does it take so that the total number of bits fit neatly into a string of bytes (i.e., is divisible by 8)?

It takes 24 bits, which is 3 bytes. And there are 4 Base64 characters (of 6 bits each) in 24 bits. I suppose this was the rationale behind the = padding requirement.

Here is a table that displays how the original file size affects the Base64 output:

Let's walk through some examples of strings that both require padding and do not require it.

Notice that since there were only 2 bits to use at the end, 0000 was used as padding to the end to make the bit length (excluding any = padding) divisible by 6.

This time 00 was used as padding at the end of the string.

No 0s needed as padding this time since the number of bits was divisible by 6.

Now we should be able to understand when padding is required and when it isn't. Let's take a look at the completed table of file4.txt (the Base64 representation of file3.txt):

One last thing to be aware of is that file4.txt, whose contents are /zIzCg==, will be stored as UTF-8 (which will be the exact same as ASCII in this instance since Base64 is a subset of the ASCII alphabet). Remember that Base64 isn't a character encoding! It's a binary-to-text encoding. Character encodings are the ones that are stored on disk. One mistaken assumption I had while learning this was that the Base64 file would have the exact same bytes on disk as the original file (i.e., file4.txt and file3.txt would have the same bytes). However this is not the case! Observe:

So Base64 took the underlying bits of file3.txt, used its algorithm to map those to Base64 characters, and then wrote those characters to file4.txt in UTF-8. If we created a new file and manually typed in /zIzCg==, it would have the exact same binary representation. This is simply a UTF-8 encoding of text.

= is also not URL-safe, but there is no standardization on how to handle it. Some libraries will percent-encode it (%3D) and some will encode it as a period (.).

For some reason people often mix these two terms up. I think the reason why, specifically when it involves Base64, is because of the HTTP Authorization request header and JWTs. Both of these concepts are security-related and involve Base64 to transform plaintext into seemingly "scrambled" output. As a result, people mistakenly think Base64 encoding is the same thing as encryption.

Encryption is the process of mathematically transforming plaintext into ciphertext (a bunch of gibberish) using a key (basically just a random number). Depending on the type of encryption used, the only way to transform ciphertext back to plaintext is with that same key (symmetric encryption) or with a different-but-mathematically-related key (asymmetric encryption). The only way to break encryption without the key is through brute force, which depending on the strength of encryption used, could take 6.4 quadrillion years.

Encoding, in the binary-to-text sense, is the process of transforming bits into an output that's human-printable. It's meant to be a trivially reversible process that anyone can do. Even if a different encoding than Base64 were used, there are a pretty finite amount of encodings out there. Brute forcing that would probably take a modern computer a handful of milliseconds to accomplish.

This of course implies that the HTTP Authorization request header and JWTs do not provide any inherent data confidentiality. Not to say that they are useless, but just that encryption is not one of their benefits. Anyone who intercepts those pieces of data can simply decode the Base64 with ease (if they are technically savvy enough to sniff network traffic then the odds are pretty good they also know what Base64 is). Base64 is meant to ensure that you won't have to deal with binary data (i.e., bytes that the standard character encodings don't know how to interpret) or characters like NUL or EOF. It is often used in security-related concepts (such as the PEM format for example), but it is not itself a security technique!

In python 2 there are a class of string literals that are known as unicode strings. They are delineated by prefixing the character u to a string literal (e.g., u'abc'). I am not a fan of the term unicode string because it leads to the confusion that unicode is an encoding. So what exactly does python mean when it refers to unicode strings?

So we define 2 strings, a and b, which contain the same contents as file1.txt and file2.txt from part 1 did. a is able to be printed out to the console without an issue, but the console can't render ŔŖ at the end of b. Instead those characters are replaced with their unicode code points: \u0154 (U+0154) and \u0156 (U+0156). It appears that the python 2 interpreter can only print strings using ASCII, and not a unicode-compatible encoding.

String a can be encoded using both ASCII and UTF-8 as expected. Also as expected, encoding string b using ASCII results in an error since neither Ŕ nor Ŗ are ASCII-compatible. And encoding string b using UTF-8 renders a string that is a mix of ASCII characters (what python 2 can handle) and the hex representations of the non-ASCII characters python 2 couldn't handle.

Python 3 treats every string as a unicode string, and on top of that, can print non-ASCII compatible characters to the console now. Also the encode() function still works the same:

The only other question remaining is how to print out the code points?

Now readers should have a good idea of what Base64 is and how it works, the difference between encoding and encryption, and what python means by unicode strings. That was a lot to get through! But that is indicative of the complexities and overloaded terms surrounding what an "encoding" is.

Setting up SvelteKit with Storybook

Bradley Neumaier
Hello! My name is Bradley. I'm a software developer who is interested in security and testability. My favorite languages are Kotlin, Swift, and Python.
Decoding the confusing world of encodings (Part 1)
#unicode #utf8 #ascii #base64