Neo4j is a Graph DB written in Java, the j in 4j at the end stands for Java :). I like the variety of self placed courses and the certifications offered by them, all for free, wow.

Cypher is the declarative query language we would be using to interact with the Neo4j database. We can run Cypher queries directly on the Neo4j browser and can use one of the drivers to make calls to the database from our application.

In this post we shall focus on running certain Cypher queries from the browser, and see some key GraphDB concepts along the way. Let's get started...

Head over to this link, signup/signin, and create a sandbox > create a project, choose Blank Project.

We have choosen blank project cause we can also load our own data instead of working with some pre-built data.

Click on the Open button to open the project with the Neo4j browser.

I have already added some data to the blank project before, so I'm going to delete all the nodes and their relationships first, you may not need this yet, however you may come back to this step later on when needed.

In the command above, the parentheses pair represents a node, and n is a variable that represents a node, so we are matching all nodes (as there are no conditions) and subsequently deleting those including their relationships using DETACH DELETE.

A node is a discrete entity, for our IoT use case, it could be an Edge device, power source etc. Refer to this github repo for a sample IoT data modeling.

In Cypher a Node is enclosed in parantheses, for ex. (e) refers to a node represented by a variable e.

And then comes label(s) which are denoted by colon :, that we could use to tag a node, for instance if it's an edge device we could label it :EdgeDevice. So now our node becomes (e:EdgeDevice). Note that labels are usually written in PascalCase.

We could add multiple labels to a node, so let's also label our edge device as a thing, making our node look like (e:EdgeDevice:Thing),

Properties are key value pairs defining the actual object. Let's say we want to give some names to our edge devices, like Edge Device 1, 2 etc. and another property to identify the floor in which they are installed, like GF, 1F, 2F etc. The properties for our first device would then be like:

Our node should finally look like (e:EdgeDevice:Thing { name: 'Edge Device 1', floor: 'GF' } ). Note that the variable name is only optional and is required only if we reuse the variable in our query. Let's create the node on the browser.

And the respective table should be:

Note that the identity was auto generated.

What if we create another node with the same properties.

It would get created, and we would now have two similar nodes.

let's say we want the name of the device to be unique, in such case, we could create a constraint to set the name as unique.

But before doing so, we should get rid of the duplicates, as otherwise it would throw an error. Let's first get the IDs of the nodes.

So there are two nodes with IDs 0 and 41, we can delete one, let's go with 41. Note the numbers may vary in your case.

Now, if we try to create another device with the same name, it should fail.

So far, we have added only one edge device, we could add other devices as required in a similar manner. However it's common to import many such nodes from a CSV as it would be faster, than executing CREATE statements individually.

I am just going to add some data in Google sheets as follows. 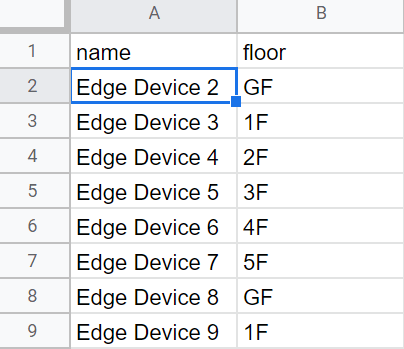 I then published it with the following settings. 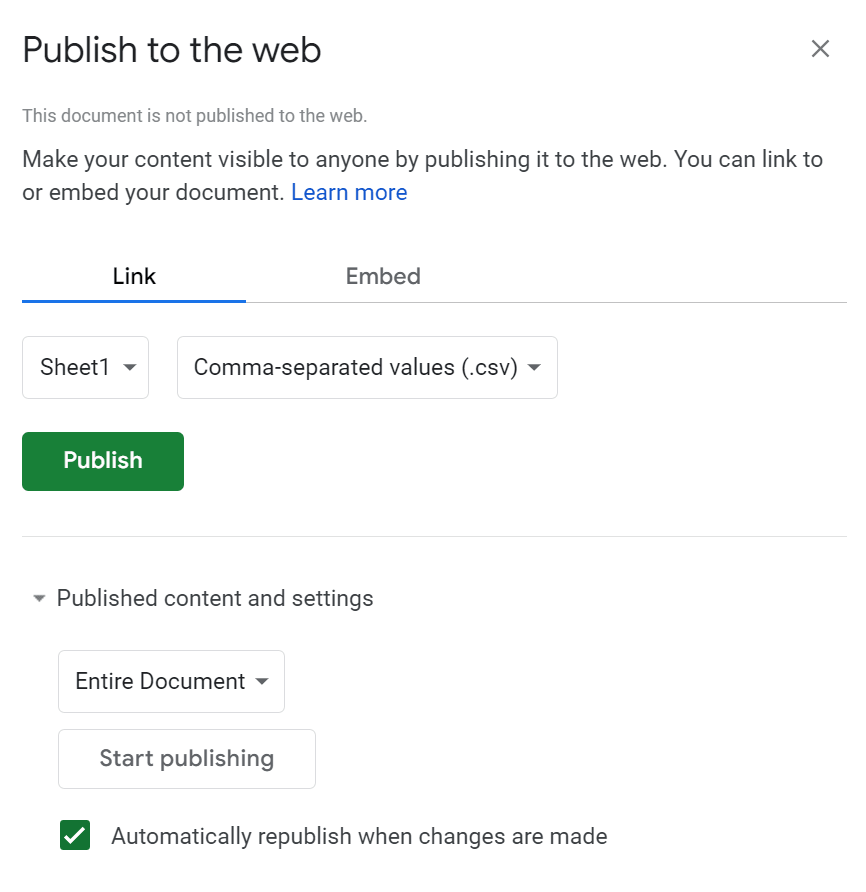 Awesome, so we have successfully created the edge device nodes.

Let's do a similar exercise to add nodes for the manufacturers. We would add only one property which is name.

Note that I got the companies list from here

Let's create those. But this time let's go with a loop as we would only add 10 companies.

Let's also add a constraint for the name.

Let's add few other nodes for the sensor type. I obtained the info form this link

So far we have been adding nodes, for now these nodes are isolated data entities with out any relationships to other nodes.

Let's now add a relationship between the nodes Edge Device 1 and Cooler Screens.

Relationships are represented by arrows and square brackets. They are unidirectional -[]-> or <-[]-. They also have a label like node, but it's only one label for a relationship unlike a node, and the relationship label is also called a relationship type.

Like a node, we can also add properties to a relationship. So if we use r as the variable and IS_MANUFACTURED_BY as the label it should now become -[r:IS_MANUFACTURED_BY]->. Just like nodes, using a variable is optional here too, and is useful when there is a need to reuse it.

We have formed the cypher, we just need to put CREATE before it to create the relation.

Let's use MATCH to get the graph.

Note that we can drag the graph objects for desired visibility.

The returned graph should be 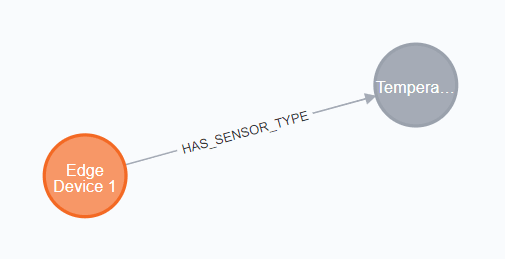 Let's now see the final graph of Edge device 1 with both relationships.

Thus, we have put some minimal data relevant to IoT and explored some fundamental concepts/functionalities of GraphDB, Cypher, and the Neo4j browser. Thank you for reading !!!

A UI for your room

DevOps and IoT: Better TOGETHER!

Wireless IoT for the Rest of Us

Once suspended, networkandcode will not be able to comment or publish posts until their suspension is removed.

Once unsuspended, networkandcode will be able to comment and publish posts again.

Once unpublished, all posts by networkandcode will become hidden and only accessible to themselves.

If networkandcode is not suspended, they can still re-publish their posts from their dashboard.

Once unpublished, this post will become invisible to the public and only accessible to Shakir.

Thanks for keeping DEV Community 👩‍💻👨‍💻 safe. Here is what you can do to flag networkandcode:

Unflagging networkandcode will restore default visibility to their posts.