In computer science or mathematics, algorithms provide a clear and concise step-by-step process for solving a specific problem. They're commonly used for a variety of tasks, including number sorting, machine learning, or displaying data on a screen. To put things in perspective, think about all the steps you'd take to make a peanut butter sandwich, you'll notice that you follow the same process subconsciously whenever you want to make a peanut butter sandwich, if we were to automate that process, we'd use the same steps. This is the general idea behind algorithms.

In this article, we’ll cover a very popular sorting algorithm the quicksort algorithm, also known as the "Partition Exchange" sort, which provides an effective and efficient method of sorting a list of data. Here's what we’ll cover:

What is the quicksort algorithm?

It is divide-and-conquer in the sense that each iteration partitions (divides) the input list into two lists, one containing all the elements smaller in value to the left of the pivot, and another containing all the larger elements to the right of the pivot. It then recursively sorts both lists or arrays before recombining them, thereby effectively sorting the list. It is still one of the most efficient general-purpose sorting algorithms available.

There are two things to note here: partition and recursion. Partition is the peanut butter in this sorting algorithm sandwich; it is how we arrange our input list in order, and recursion simply means repeating the algorithm until a condition is met and the list is sorted.

For the sake of this article, we would be focused on using Hoare’s partition method. Let's see an example with a visual aid so that we get a feel for how it works. 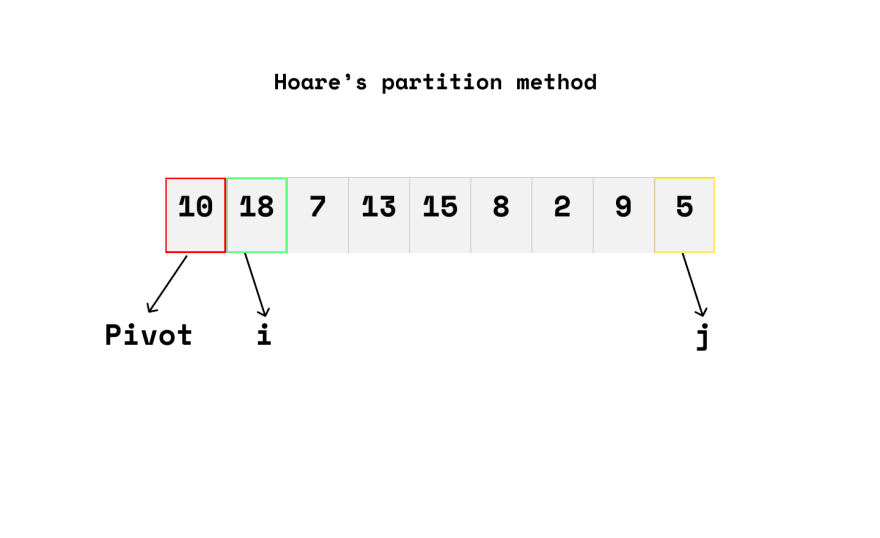 Step 1 is to set our pivot element, which is always the first element in a hoare partition algorithm, and to initialize our i and j indexes, which are the first and last elements, respectively.

Notice how index i moves one step forwards, now we check to see if the element in that index is greater than our pivot, it is, so we have an element to swap.

Now j also checks to see if its element is less than our pivot, since j and i satisfy the condition, they can now swap positions. Now both indexes would move one step forward and continue the process

Here i's condition is satisfied so a swap is made.

Here we see the next swap occur after both indexes move forward.

After we have gotten the position of the pivot element, we now have two unsorted list to the left and right of the pivot, to sort these lists we perform quicksort recursively on them.

It’s okay if you don’t understand this now, in the coming section we would see how quicksort uses the partition algorithm and recursion to effectively sort a list.

To implement quicksort in JavaScript, we need three functions:

Note: No new arrays are created in the process of performing quick sort on the given array.

Let's talk about the time and space complexity of the Quicksort algorithm now that we know how to implement it.

Note: quicksort performs differently based on how we choose the pivot element and how we divide (N) elements where (N) is the input size.

The best case time complexity for a quicksort algorithm is O(nlogn), but it is not possible for us to achieve this, randomly we can, but it is rare.

Therefore Quicksort takes O(nlogn) time in expectation to sort an array of n distinct elements, averaged over all n! permutations of n elements with equal probability.

The worst case time complexity of quicksort is O(n^2) because for an already sorted list partitioning would always happen at the beginning of the list.

Here's an excellent article that dives deep into the complexity analysis of the quicksort algorithm.

JavaScript offers a simple and easy-to-use inbuilt sorting method, that we can use to sort a list. To use it we simply call the method on the array like so:

So what is the problem with using this method, why do we still need to use quicksort?

The issue is with the way the array elements are sorted, in Chrome's V8 Engine, the default sort() method used by JavaScript uses insertion sort, while Mozilla Firefox and Safari use merge sort. This method, however, is inefficient when sorting a sizable number of elements. In that case quicksort is the best method for large sets of data.

In this article, we've gone over the theory behind Quicksort to see how it works and the different partition methods that can be used with quicksort we also saw how it can be implemented recursively using JavaScript.

How to Recognize MRZ from Passport and ID Card with Node.js

Once suspended, nelsonn_michael will not be able to comment or publish posts until their suspension is removed.

Once unsuspended, nelsonn_michael will be able to comment and publish posts again.

Once unpublished, all posts by nelsonn_michael will become hidden and only accessible to themselves.

If nelsonn_michael is not suspended, they can still re-publish their posts from their dashboard.

Once unpublished, this post will become invisible to the public and only accessible to Nelson Michael.

Thanks for keeping DEV Community 👩‍💻👨‍💻 safe. Here is what you can do to flag nelsonn_michael:

Unflagging nelsonn_michael will restore default visibility to their posts.