Docker is an open-source platform that makes it possible for software developers to Build, Ship, and Run any App anywhere.
In a high-level explanation, a dockerized App can be likened to a flower growing in a bucket whereby the bucket contains all that the flower needs to survive notwithstanding the environment.
It basically places (containerizes) the App in a container that houses all that the App needs to run.

This article assumes that the reader already understands how to use Laravel, our business is how to dockerize it.

This article was originally published on medium

To get a Laravel app running on Docker, the following must be put in place:

If you've met the requirements above, then you're ready and good to go. Let's dive deep into the main business.

The sample project used in this article can be cloned here

Before we proceed, it's important we explain some basic concepts that we'll be using in this tutorials. Most prominent among them are images and containers.

I*mages*: The filesystem and metadata needed to run containers. They can be thought of as an application packaging format that includes all of the dependencies to run the application, and default settings to execute that application. The metadata includes defaults for the command to run, environment variables, labels, and healthcheck command.

Containers: An instance of an isolated application. A container needs the image to define its initial state and uses the read-only filesystem from the image along with a container specific read-write filesystem. A running container is a wrapper around a running process, giving that process namespaces for things like filesystem, network, and PIDs.

Another analogy that explains images and containers is class and objects in object-oriented programming. An image is a class while a container is an object of the class.

Explaining further; in order to run a Laravel app on our local machine, we install LEMP, WAMP, XAMP, or MAMP as the case may be as well as phpmyadmin if it's needed. These pieces of software are bundled as images in docker environment. This means, to dockerize a Laravel app, we need to create an image that contains each of those packages, or we create different images for each of them and internetwork them inside the docker container

Click on each of the images to read details about them. Having established the necessary theories about what we are going to do, let us begin the main processes of dockerizing the app following the steps below.

Step 1 - Create the Laravel Project to be dockerized

Create the Laravel project that you want to dockerized. Open your terminal and cd into the root of the project.

Next up, edit the docker-compose.yaml file as follows:

You can view the snippet above on GitHub Gist for the line numbers.

We’ve finished what we need to do, but before we summarize, let me explain what is happening in the YAML file above.

On line 1, we specified the version of docker-compose to be used.

On line 2, we declared the beginning of the definition of our services, services here literally means images.

On line 3, we declared the first service name core_services; note that the name is up to you to decide. This service would be an image comprising the Nginx and PHP interpreter and other dependencies such as composer.

On line 6–7, we specified the port through which we can access the app on the browser. It means we can access the app by visiting 0.0.0.44678 on the browser.
On line 8–9, we mapped the directory of our project to /var/wwwinside the docker container. What it means is, copy the entire project located in /var/www/html/laravel-dockerization to /var/www inside the container. With this, any change we make externally in the project directory will be reflected inside the docker container and vice versa.

From line 13–23, we created the mysql service. We specified the version to be used as 5.7, this can change depending on your choice. We specified the MYSQL_ROOT_PASSWORD. This ${DB_PASSWORD} means replace this with the value of DB_PASSWORD in the .env file. So, ensure that the value of DB_PASSOWRD in the .env is the password you want to use for mysql.

On line 20–21, we mapped the volume from the external directory to the mysql container volume. This volume ensures that data stored in the database is persisted in the local machine even if the container is deleted. You can name the directory what you choose to but ensure you create it before the mapping.

From line 24–34, we created the phpmyadmin service with the container name pma. We exposed port 44679 which means we can visit 0.0.0.44679 to access the phpmyadmin. On line 30, you’ll notice we specified the PMA_HOST as the MySQL container db_mysql, this is very important. If the PMA_HOST is not in sync with the mysql container, you’ll not be able to access your phpmyadmin as the PMA_HOST will default to localhost. We also specified the MYSQL_ROOT_PASSWORD and MYSQL_DATABASE to use the DB_PASSWORD and DB_DATABASE in the .env respectively. Note that MYSQL_DATABASE is optional.

From line 36–38, we defined the backend network that we connected the containers in the previous lines. When docker encounters the backend network, it will look for where it’s defined and create it first before continuing.
Next up, we confirm that the correct values are passed to the docker-compose from the .env by running the command below:

The output of the command above should look like the screenshot below: 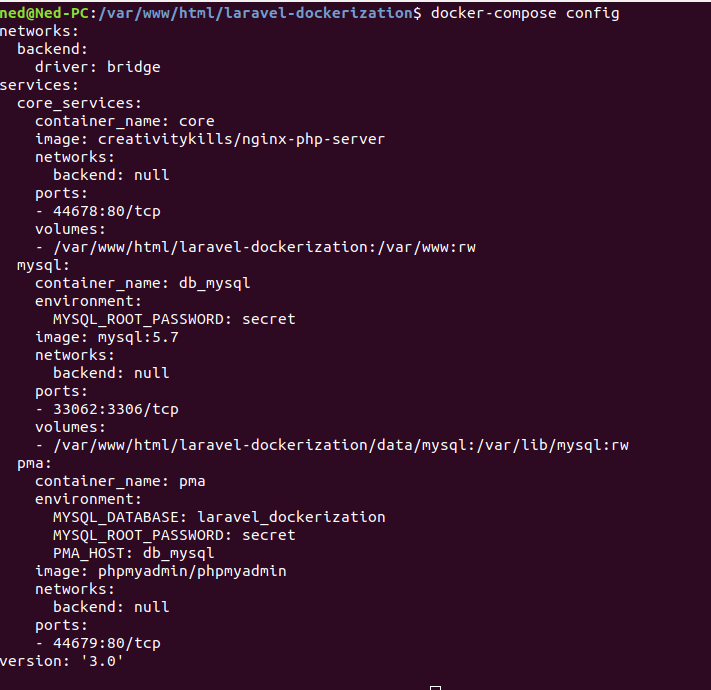 Below is the look of my .env file:

The command above will build the containers and start them up. The flag -d starts the containers in interactive mode, the processes run in the background and you’ll be able to run other commands subsequently, but if you’d want to monitor the build processes, then just run:

Next up, we need to give full permission to the storage directory so that docker would be able to read and write to it, run the command below:

Now, if the docker-compose command above build successfully, we confirm that the containers are running as supposed by running the command below:

The output of the command above should look like the screenshot shown below:

The screenshot above shows that all the containers are running as expected. If all of the three containers are not running, it means something has gone wrong. You need to drop the containers and rebuild again removing the -d flag. This will make the build process verbose and you can easily point what went wrong and get it fixed. To do this run the command below: 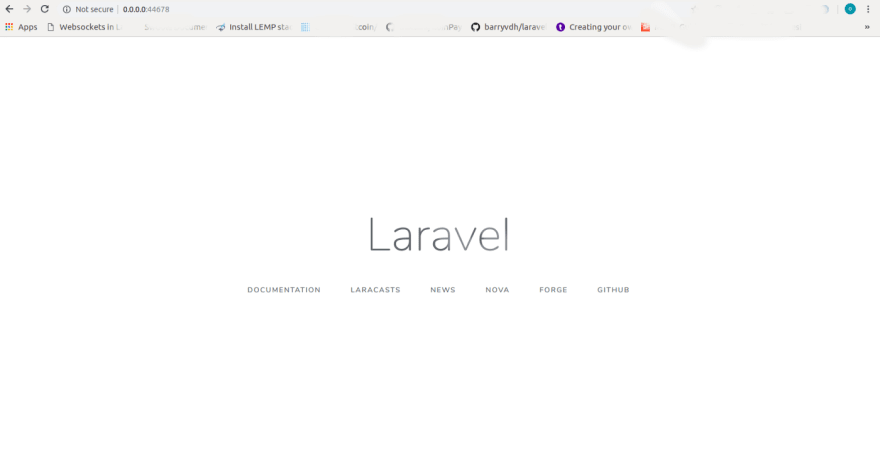 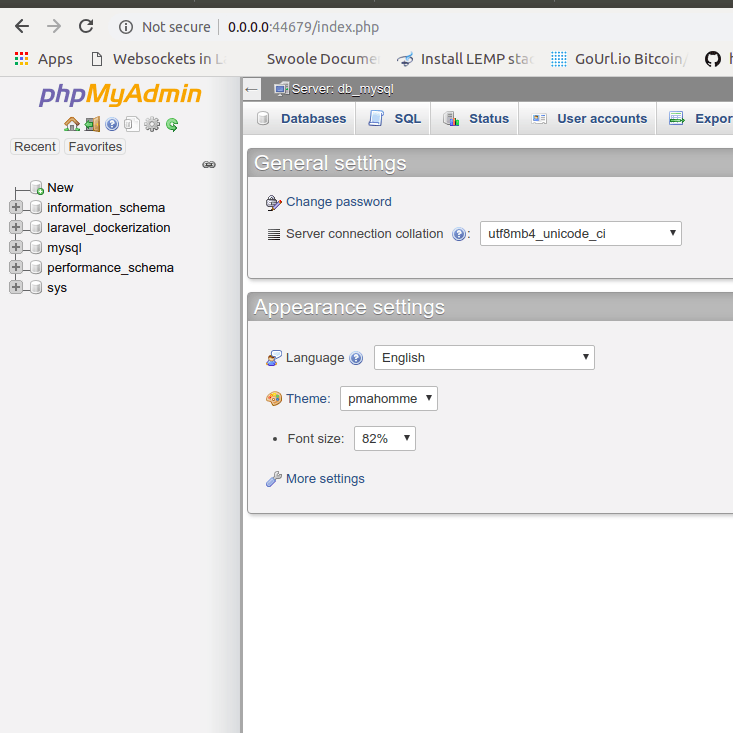 Note: if the database is not created automatically, you can manually create it using the PMA GUI or via MySQL command line.

Step 4 — Interacting with the containers

Now that the app is up and running, you might want to interact with the container to performs actions like running migration or importing SQL dump into the database. To enter the container, run the command below:

Remember that core is the name of the php and nginx container. You can now run migration inside the container.

To enter the mysql container, run:

How to import SQL dump file into the database

Note that, in copying the SQL dump file to the initdb.d, if you don’t have root access on your machine, you might want to use sudo command to copy the file via the terminal as shown below:

The screenshot below shows the steps above being applied.

In this article, we have demonstrated how to dockerize a Laravel application using already built docker images from the docker hub. We tried to explain what goes on in the docker-compose.yaml and also showed how we can interact with the containers and as well as showed how we can import SQL dump into the MySQL container.

Should you have any contribution or question for me, reach out here or via twitter.

Use Recursion to Create a Range of Numbers