Setting up the tools.

To use python, you have to have a code editor and required libraries and modules installed on your pc. This article covers how to run python on jupyter notebook running on vs code. We will start by installing vs code on our machine. Vs code runs on all machines from windows, mac or Linux. If you don't have vs code installed on your computer, visit https://code.visualstudio.com/ to download and install. Vs code is open source; therefore, it is free and easy to install. After installing vs code and opening it, your screen will look as shown below. 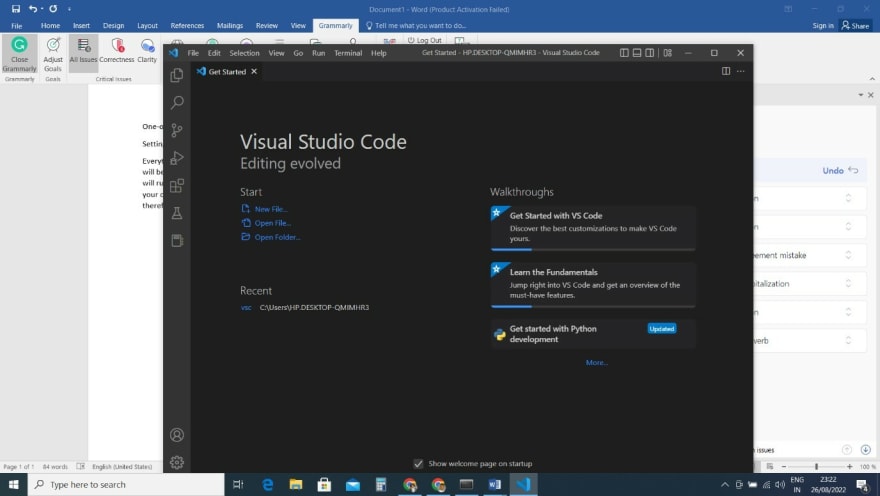 Click on the extension on the left side of the window, and on the search, type Jupyter notebook 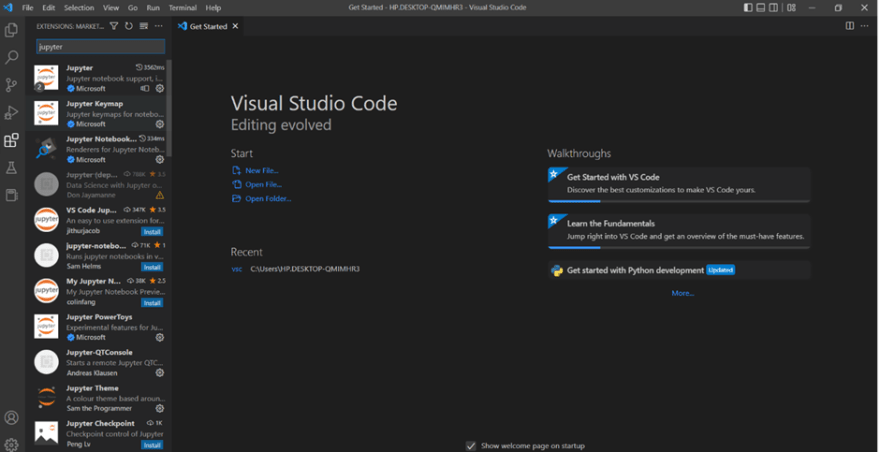 Then click on the jupyter notebook icon and then install it. Repeat the same procedure to any library you want to install in the vs code. After that, install the anaconda on your machine. If you haven't already installed anaconda, visit https://anaconda.org/ for an installation guide. After that, go to the start button on your windows machine and type anaconda prompt 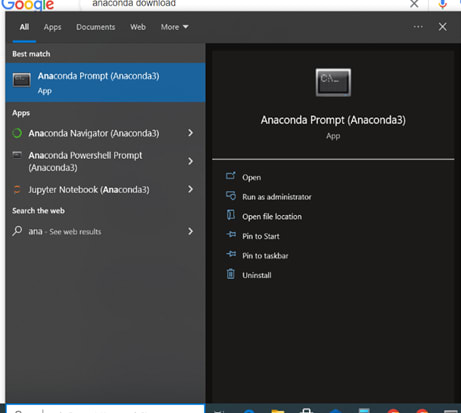 Click on the anaconda prompt, and you will be directed to the conda terminal. And then create your workspace environment. I created an environment called datascience_basics and will use python 3.9 in this project. The command to create this env in anaconda will be

After running the command, your screen will be as shown below. 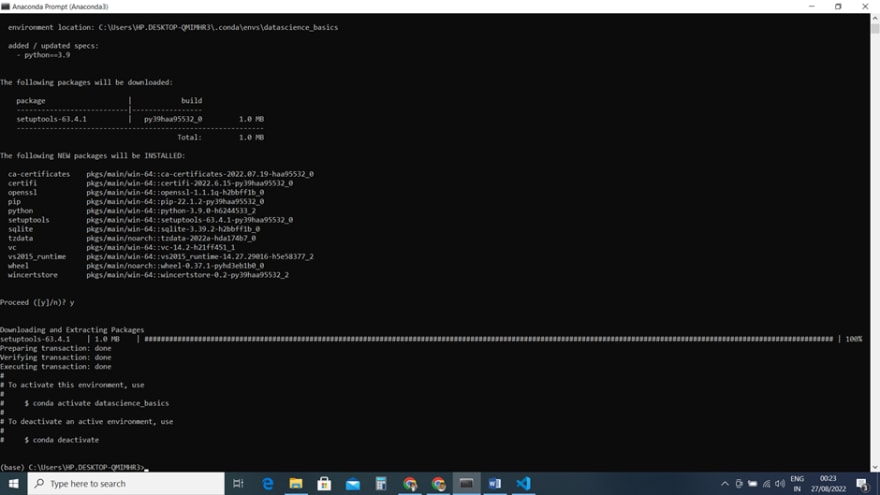 Several packages will be installed, as shown in the screenshot. After that, we have to activate our environment. To activate the environment run the following command in your terminal.

We can check whether jupyter is properly installed by running

If you installed it properly, your screen would be as shown below 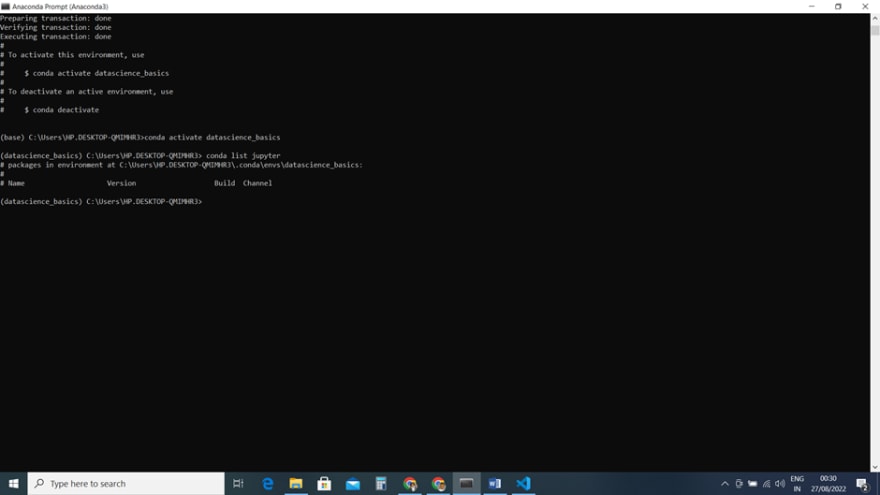 We shall then navigate to our desktop and create a folder for data science. Then we install jupyter in the created folder.

The screen will be as shown below. 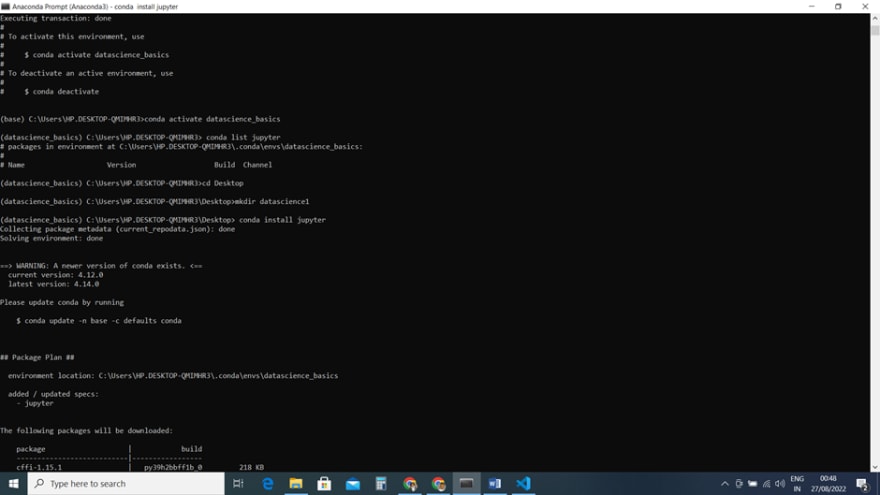 Now open vs code from the terminal using

In the taskbar of the vs code, click view and then command pallet followed by new jupyter notebook. Your screen should be as shown below 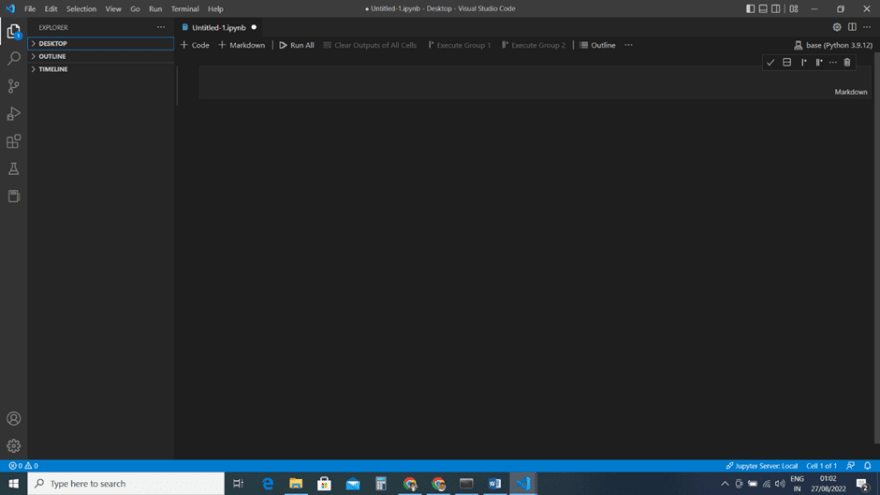 You can change from python to markdown from the top uppermost icon on vs code editor. Now your workspace is set and ready to be used. You will be able to use all python libraries and packages. Jupyter notebook uses dropdown, and your workspace will be as on the screen below. 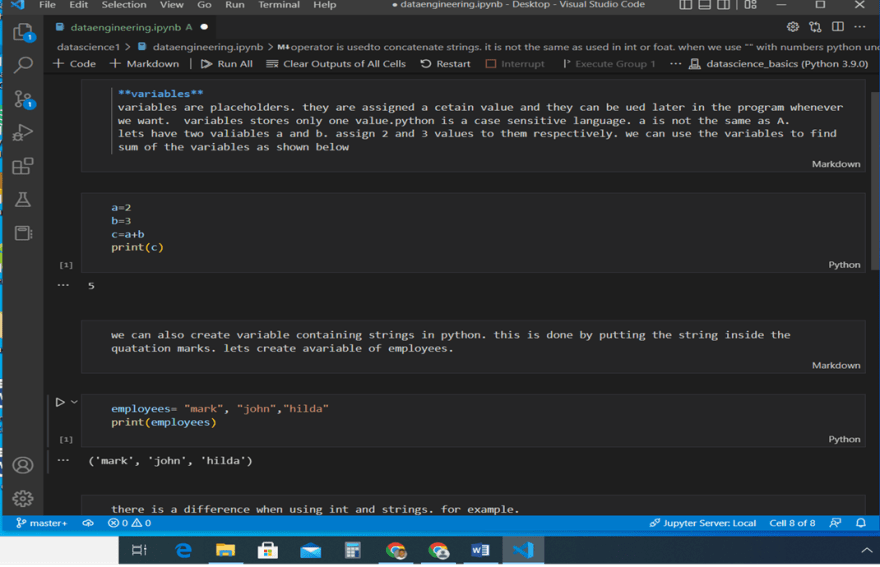 Why python in data engineering?

Data engineers collect data from different sources and convert it to the right format before delivering it to the right team. Data engineers prepare the data by carrying out activities such as removing repeated data and collecting the missing data, among other data cleaning and pre-processing activities. The cleaned data is then forwarded to the analytic team. Below is a summary of the responsibilities of data engineers.

Data is the new form of oil. As the oil moves from crude oil to different oil forms, so does data. Raw data gets into the hands of machine engineers who prepare the data and clean it before giving it to the data scientists. Data scientist manipulates and analyze the data to get different insights. Companies ingest data from a variety of sources, and they need to store this data. To achieve this, data engineers develop and constructs data pipelines. These data pipelines are used to automate the flow of data from one location to another. Depending on the nature of the data source, the data can be processed in either data streams or in batches.
Before doing anything to the system's data, engineers ensure that it flows efficiently in the system. The input of this data can be anything from images, videos, streams of JSON and XML data, timely batches of data, or even data from deployed sensors. Data engineers design systems that take this data as their input, transform it, and then store it in the right format for it to be used by the data scientist, data analyst machine learning engineers, among other data personnel. These systems are sometimes referred to as extract, transform, and load (ETL) pipelines.
As the data is flowing through to the system, it needs to conform to certain standards of architecture. To make the data more accessible to the user, data normalization is done. some of the
activities for data normalization include removal of duplicated data, fixing missing and conflicting data, and converting the data to the right format. Unstructured data is stored in data lakes, while data warehouses are used to store relational database information.
data lakes and warehouses
Data lake stores data from both internal and external sources. Data lakes and data warehouses are different. Let's have some of their differences

Once suspended, ndurumo254 will not be able to comment or publish posts until their suspension is removed.

Once unsuspended, ndurumo254 will be able to comment and publish posts again.

Once unpublished, all posts by ndurumo254 will become hidden and only accessible to themselves.

If ndurumo254 is not suspended, they can still re-publish their posts from their dashboard.

Once unpublished, this post will become invisible to the public and only accessible to muriuki muriungi erick.

Thanks for keeping DEV Community 👩‍💻👨‍💻 safe. Here is what you can do to flag ndurumo254:

Unflagging ndurumo254 will restore default visibility to their posts.