In the previous blog, we discussed deploying our Smart Contract to the Rinkeby Test Network and interacting with it from our front end.

I decided to write this article on tests as a bonus. You should write these tests before writing the Smart Contract and integrating with the front end.

So, let's write tests for our Lottery Contract.

For writing tests, we need to add a dependency to our project. For that run the following command in your root directory.

We have all pre-requisites for writing tests. Now, head on to the Lottery.test.js file and paste the following code.

ganache-cli is a fast and customizable blockchain emulator that allows us to make calls to the blockchain without the overheads of running an actual Ethereum node. This will help us in performing our tests instantaneously.

For creating an instance of web3, we have used the provider from ganache as we will be deploying our Contract to the ganache local network for testing. Apart from web3, we have required assert (a native javascript library) and interface along with the bytecode from our compiled Contract.

Above we have defined describe() function. It allows us to gather our tests into separate groupings within the same file, even multiple nested levels.

We have written our first test. Now, let's run our test. For that navigate to the root directory and run the following command in the terminal.

You should see the following output in your terminal. 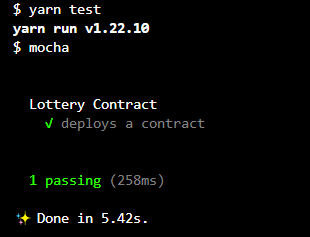 The tick in front of the test name indicates that our test has successfully passed.
Congratulations! You have written your first test.

Now let's write tests for other scenarios as well.

For that paste the code from below inside the describe() function.

Now, we have called the assert.strictEqual() method which ensures that both the arguments passed to it are strictly equal. This test will ensure that we can enter our Lottery successfully.

Similarly, we'll check for multiple accounts to enter our lottery. For that paste the code from below.

In this test, we are entering the lottery from multiple accounts and after that, we are ensuring that each player can enter the lottery or not by calling the assert.strictEqual() method.

After this, we'll write a test to ensure that users can't enter with ethers less than the required amount to enter the lottery. For that, paste the code below.

This test will make sure that the test fails when a user tries to enter with ethers less than the required amount and pass the test when the user is unable to enter the lottery.

Following this, we will write a test that tests that only the manager could able to pick a winner. For that, paste the below code.

Remember in our beforeEach() function, we have deployed the contract using accounts[0]. Thus, the address of our manager is the address stored at accounts[0]. As a result, our test should fail if we try to pick a winner from an account other than accounts[0].

This test will ensure that only our manager is allowed to pick a winner.

At last comes our final test, which ensures that ethers are sent to the winner of the Contract.

For that, paste the below test.

This test ensures that lottery ethers are sent to the winner of the lottery on picking up the winner by the manager of the contract.

We have successfully written all the necessary tests. Now let's run these tests. For that, navigate to the root directory and run the yarn test command.

You should see the following output in the terminal.