For you guys, as always, I would recommend to completing the official tutorial. Try not to end up impatiently learning something. "Reading is a window to the world!"—Lynn Butler

Today, we are going to share with the world some insights on how to properly install packages. Despite using Python here, we will probably find those ideas useful for other language as well. This article is written carefully for we have been asked such a question many times from the beginners. The problem usually occurs if they have just followed tutorials from different sources on the internet, but the instructors did not go into any detail about what is going on.

She came up to me with grinning and said, "I have already installed the package. So, why does it always disobey me with no module named blablabla?" The story has begun inadvertently;

"Show me how you installed—," asked me.

"I believe I managed to install it a while ago," she continued;

"There are no other possibilities besides the fact that you have multiple installations of Python interpreter. The safest way to install packages is to use python -m pip install gTTS any time!"

"Oh my God, you are right! It is working now! But how can that be?"

"I honestly meant to explain further."

We possibly have a number of different interpreter at one time, it could be either from different sources or as different versions. You know, as we can have it installed from:

On Windows, we probably have:

The commands above tell us that we have two Python installed:

In fact, we have one more from Anaconda, but I decided not to have it included in the system path.

The where.exe python command simply searches for all python executables within the specified environment variables and then prints the list in descending order—the highest priority of python.exe to be called occupies the first place—. In Powershell, we might just want to see which executable was called-by typing its name;

Of there, we have realised that the python.exe (is Python 3.7) and pip.exe (from Python 3.9) above do not belong to each other. 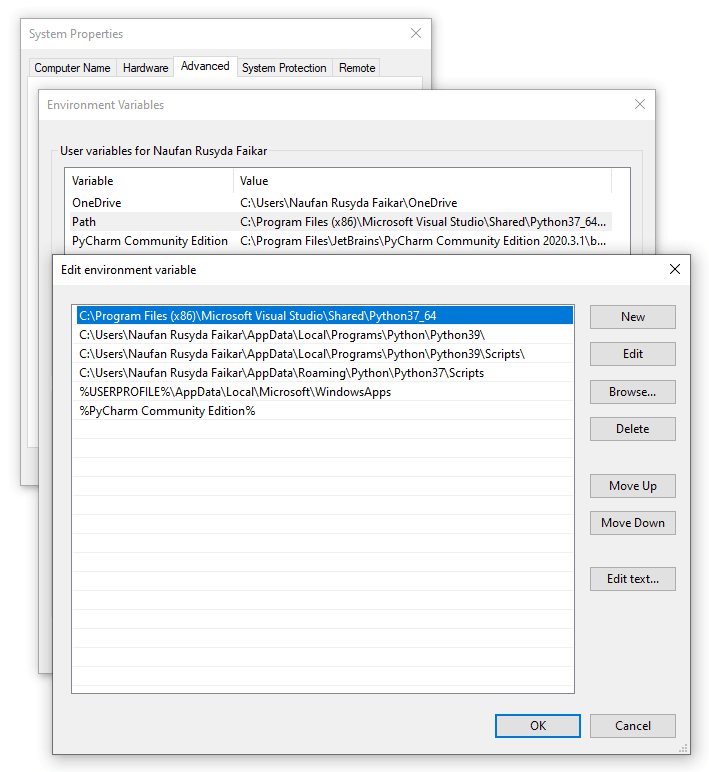 To correct this inconsistency is to rearrange the priority order of the paths. For example changing from:

where the pip.exe is included in the scripts directory. If we tend to use Python 3.9 over 3.7, just put the 3.9 and its scripts at the beginning. Do not forget to reopen the Command Prompt or Powershell once the edits have been applied.

On Linux, we can run whereis python and which python instead;

It is recommended to include the version in the command whenever installing packages: python3.9 -m pip install gTTS.

In spite of having multiple installations, if we are IPython or Jupyter Notebook users, we may prefer to install packages directly by running !pip install gTTS in there. That special command is intended to permanently install the package. So, no need to run it again.

On another day, she has come back and complained, "Why on earth the exact error came back?" 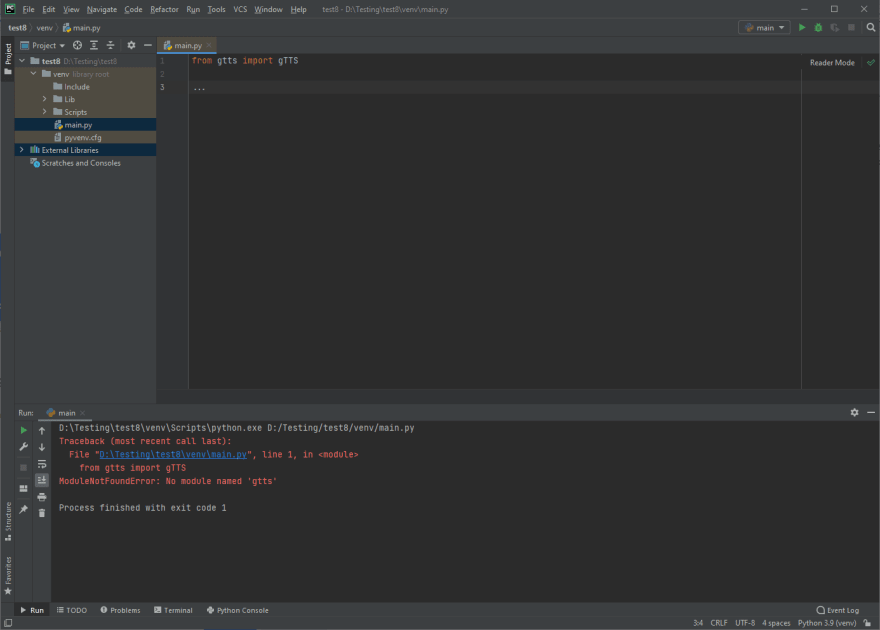 After she sent me a screenshot of all the things she could give, I smile with amusement.

"Are you insulting me?"

"No way! You are using PyCharm, are not you? Have you paid attention to the dialog that appears when creating a new project?" 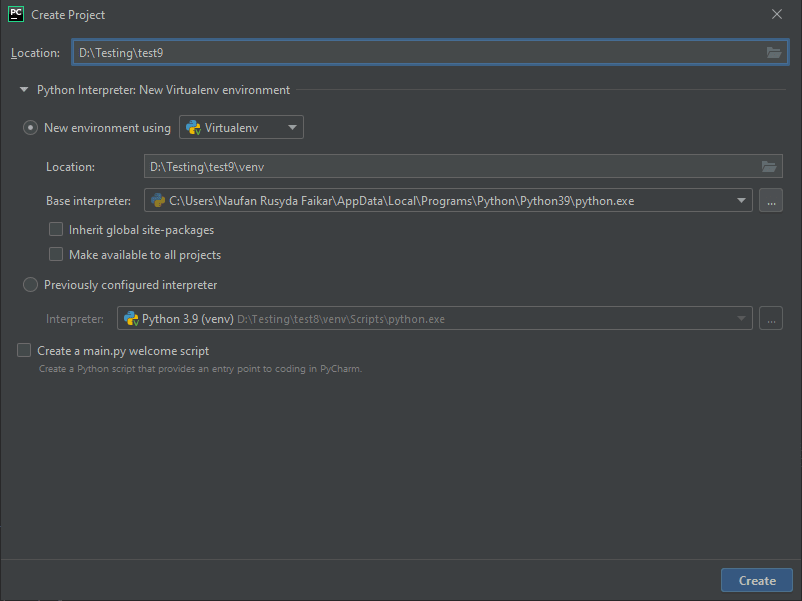 "Do not make me feel guilty!"

"Of course you must! Ha ha ha ... Uh, never mind! Whenever you choose to work with PyCharm, make sure you install packages via its integrated terminal."

we are obviously in a virtual environment named "venv". It will isolate the current one's environment from other projects, so there will be no possibility of having dependency issues of installing two or more packages. Most notably, installing packages that are no longer maintained after years. Therefore, the package installation had better to be done in its specific environment.

Of course, we always have the goo-ey (GUI—Graphical User Interface) for it. We can find more interesting finding by reading the PyCharm's official help. 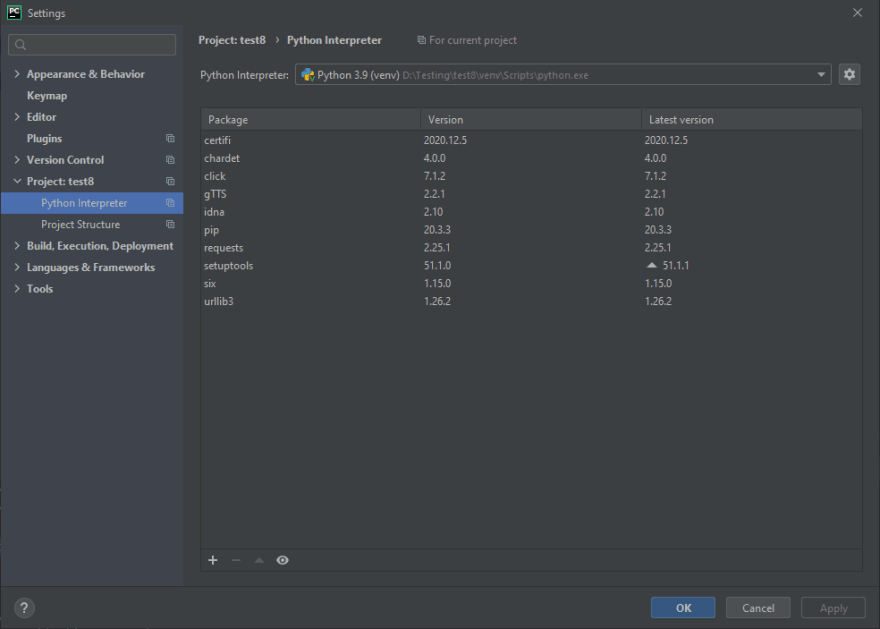 Please do read, read again and read more. It is never too late! A final note, in almost all cases, the best practice is to have a virtual environment for every single project.

Do you have other problems finding packages? Please let me know.

Naufan Rusyda Faikar
He is a programming storyteller.
Don't Treat One Like Another
#todayilearned #python
Some Strategies for Studying New Technologies: PyGTK
#python #beginners #gtk
How I Managed to Pre-processing Musshaf Images
#imageprocessing #python #todayilearned

Once unpublished, this post will become invisible to the public and only accessible to Naufan Rusyda Faikar.