Microsoft Build 2022 has just closed its virtual doors, with a lot of new services and features, and this time around a lot has been said also about DevOps.

Link to the video: https://youtu.be/Lq0BPwa69C8

Let’s start not with an announcement but rather with a lack thereof, with the great absent at Build 2022: I’m talking about Azure DevOps.

There were in fact a lot of announcements and sessions revolving around GitHub, and that’s to be expected, but not a single session, announcement, feature or demo in which Azure DevOps has been shown or even mentioned.

I think this is a clear sign for us on what the future for Azure DevOps looks like, but stay tuned because I will have a great guest on my YouTube channel very soon and we will talk exactly about this.

Talking about stuff that was actually present at Build 2022, let’s start with one of my favorite announcements: Azure now has a fully managed nginx offering. 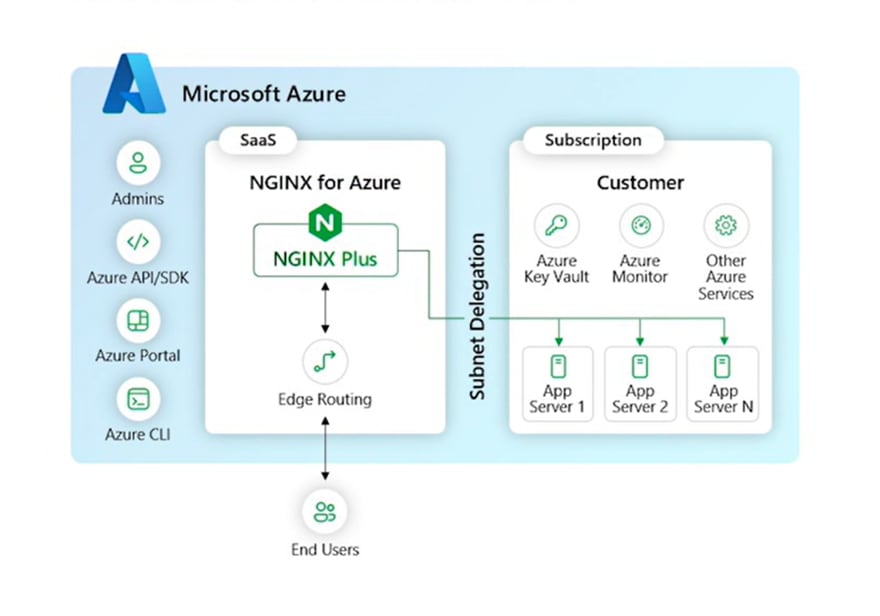 NGINX for Azure, which is currently in preview, is a SaaS solution with advanced traffic management and monitoring. The tight Azure integration enables ease of use with a few clicks for provisioning and configuration though the Azure portal.

NGINX for Azure is offered by Microsoft in partnership with F5, so you can find it through the Azure Marketplace, but you get a unified bill for all services they use on Azure and leverage existing enterprise agreements. 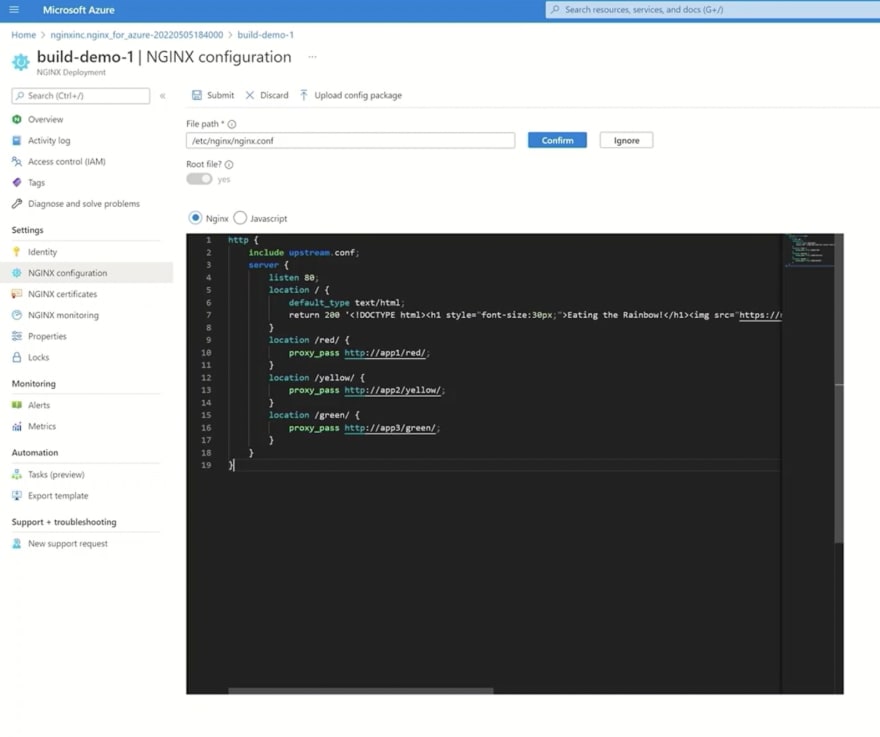 And the great thing is that being an Azure service, you can manage all the aspects of it via the Azure portal, including making configurations changes that are then applied to the service directly, and using config files that you may already have from previous deployments.

And last but not least, they have developed a GitHub integration that allows you to version control your configuration in a GitHub repo and to apply changes to that configuration via GitHub Actions

We will talk again about containers in a minute, but let me change page and talk about another announcement I quite liked. I’m talking about Microsoft Dev Boxes. 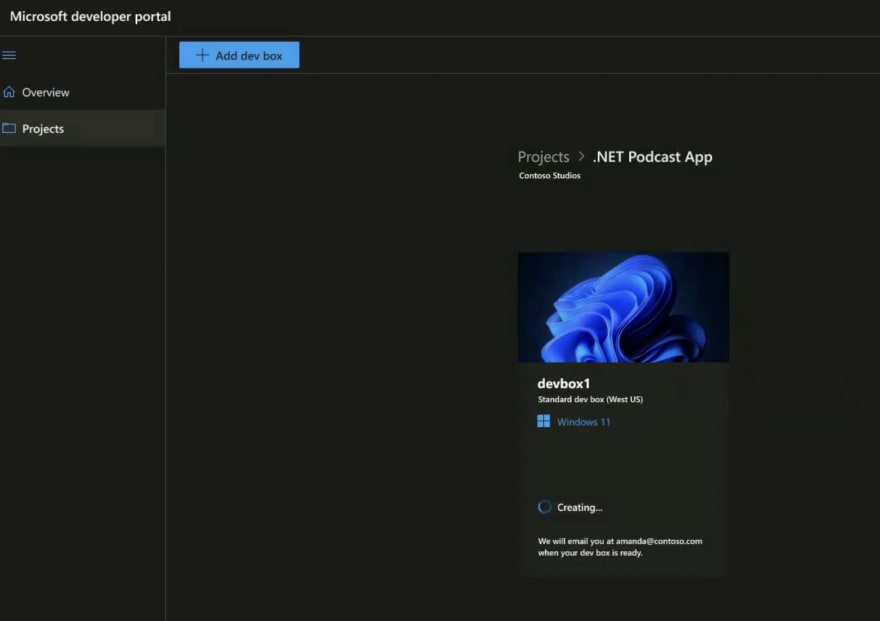 Microsoft Dev Boxes, currently in private preview, is a new cloud service that provides developers with secure, ready-to-code developer workstations. This service basically makes it easy for developers to access the tools and resources they need without worrying about workstation configuration and maintenance.

If it sounds like what GitHub Codespaces does is because, in a way, the two services have the same purpose: make development easier and management of dependencies quicker.

Dev Boxes, however, goes a step further than Codespaces, because it supports all kinds of development, including desktop and mobile, and it runs on Windows 11 (while codespaces run only on linux). And in fact you can use it from the browser but also using Remote Desktop.

Dev teams preconfigure Dev Boxes for specific projects and tasks, enabling devs to get started quickly with an environment that’s ready to build and run their app in minutes. At the same time, Microsoft Dev Box ensures unified management, security, and compliance stay in the hands of IT by leveraging Windows 365 to integrate Dev Boxes with Intune and Microsoft Endpoint Manager.

And when you are ready to test your applications or run them against other services, Azure Deployment Environments, also in private preview, will make it easy for developer teams to quickly spin up app infrastructure with self-service of project-based infrastructure-as-code templates. 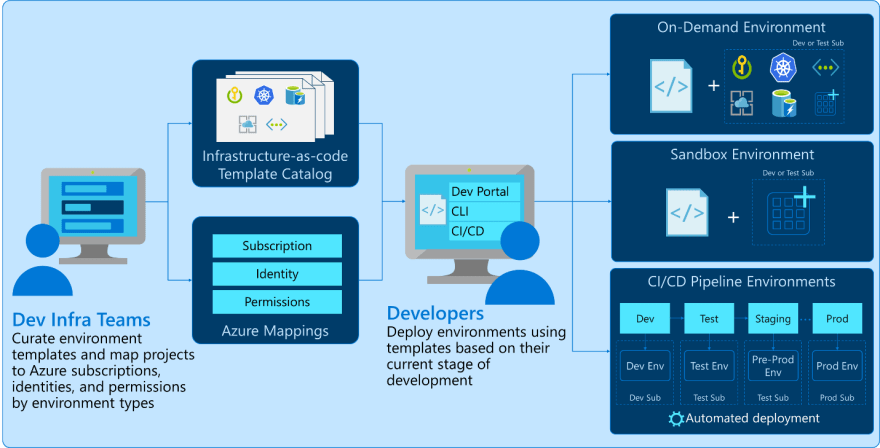 This will minimize set-up time while maximizing security, compliance, and cost efficiency, and enforcing best practices

Few years ago, Microsoft had their own Load Testing service integrated in Azure DevOps… actually, at that time it was still called Visual Studio Team Services. But that service has been deprecated for years already, leaving Microsoft and Azure without a proper Load Testing service… well no more.

Azure Load Testing is a fully managed load-testing service built for and in Azure that makes it easy to generate huge load using Azure resources and identify app performance bottlenecks. 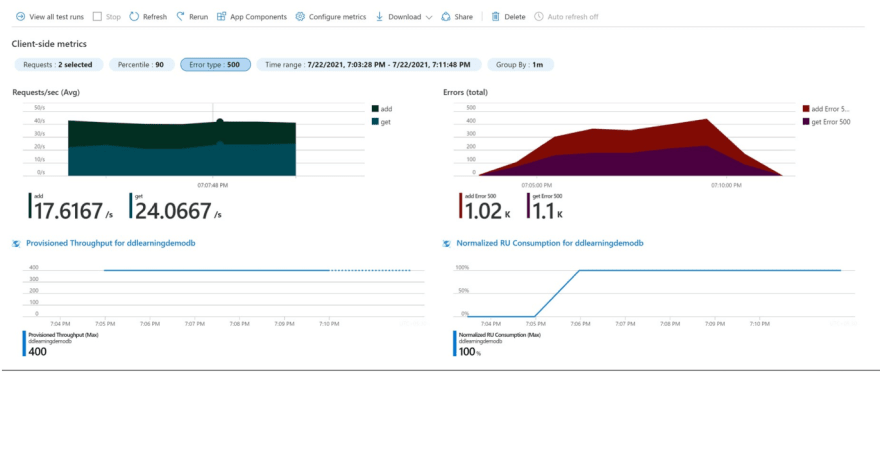 It enables developers and testers to generate high-scale load and run simulations that reveal actionable insights into app performance, scalability, and capacity. 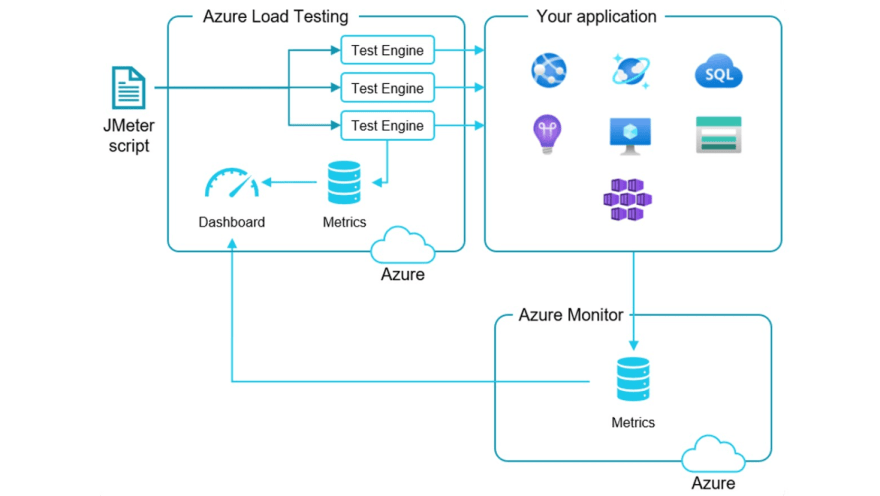 The service can use existing Apache JMeter scripts, and you will get recommendations backed by metrics and analytics. 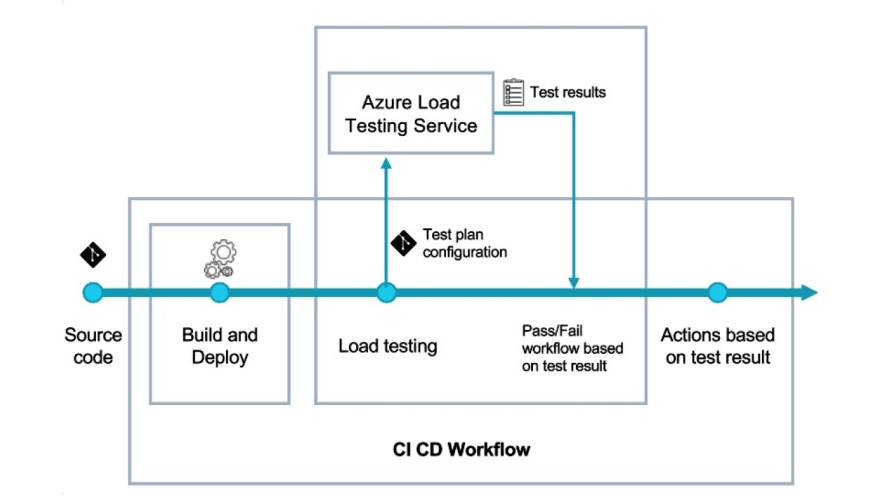 I’m really excited to try this service out, stay tuned because I will for sure have a video in which I’m going to test it and review it.

Alright, next up the GA of Azure Container Apps. The service has been in preview for a while, but now it has reached GA which means that it’s stable for production workloads. 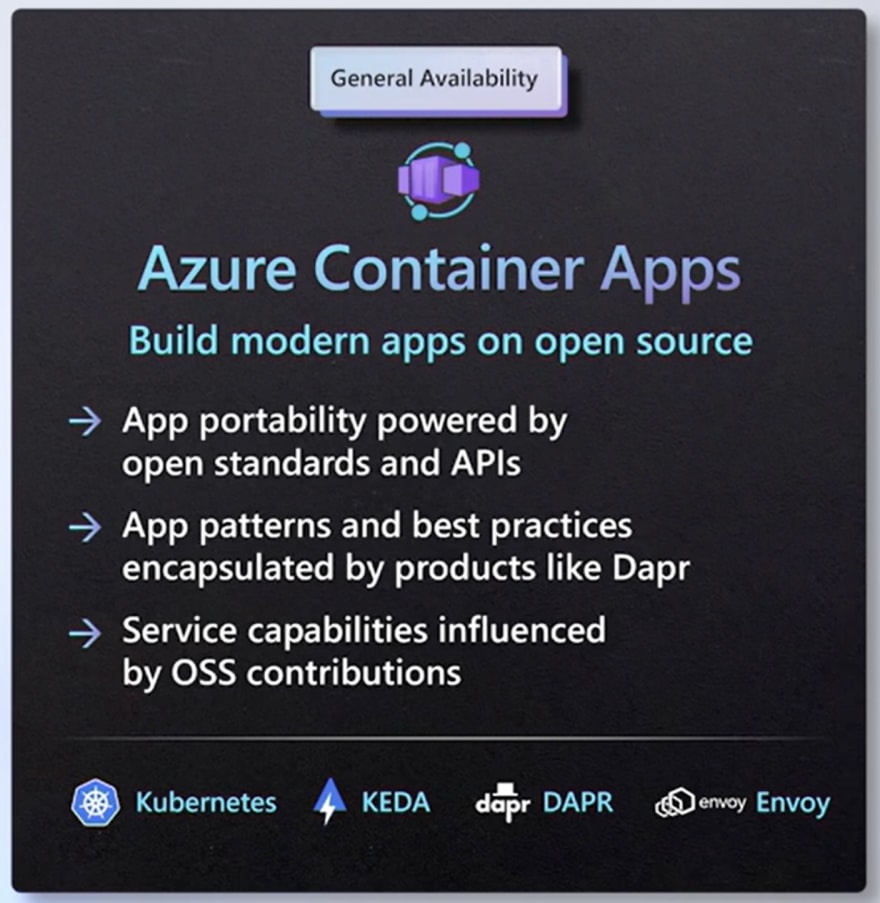 Azure Container Apps allows you to run your containerized apps in a serverless manner, but still taking advantages of Kubernetes, Keda for event-driven autoscaling, dapr, and Envoy.

One of the cool features of this service is that you can scale your pods down to 0 instances and spin up more pods automatically if requests come in.

And if all of this was not enough, during the event Scott Guthrie showed a demo in which with a single command of the Azure CLI he was able to have an application containerized, a container registry create in Azure, some GitHub Actions workflows created and run to build the image of the application, and finally have everything deployed to Azure in a brand new Azure Container App.

And if you are curious about how the app is getting containerized, this is thanks to another new announcement made at Build 2022. I’m talking about the public preview of the support for Draft v2. 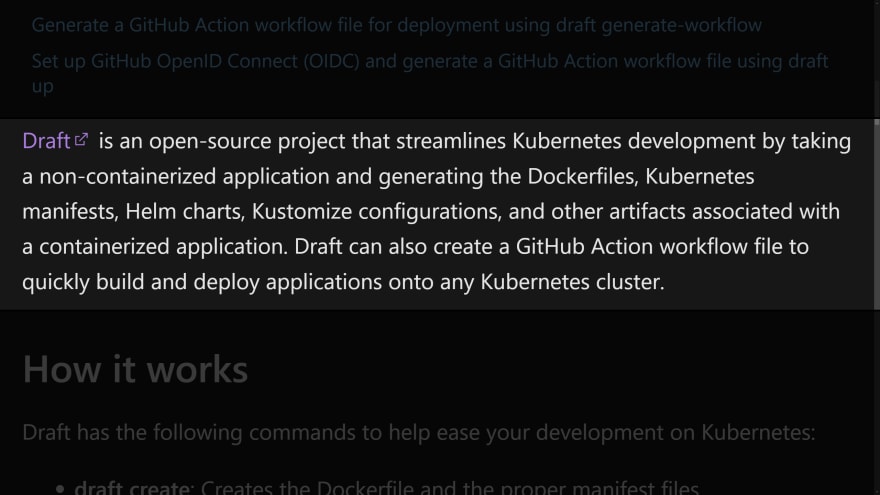 With the public preview just announced, Draft is now integrated with AKS through the Azure CLI, Azure Portal, and Visual Studio Code. And works with Azure Container Apps as well, as we have seen.

And still talking about containers and AKS, there is another interesting feature that has been announced at Build: the preview for Web App Routing.

I couldn’t find much about this new AKS add-on, and also the part of the session where the announcement has been made was quite short, but what we know from the official website is that 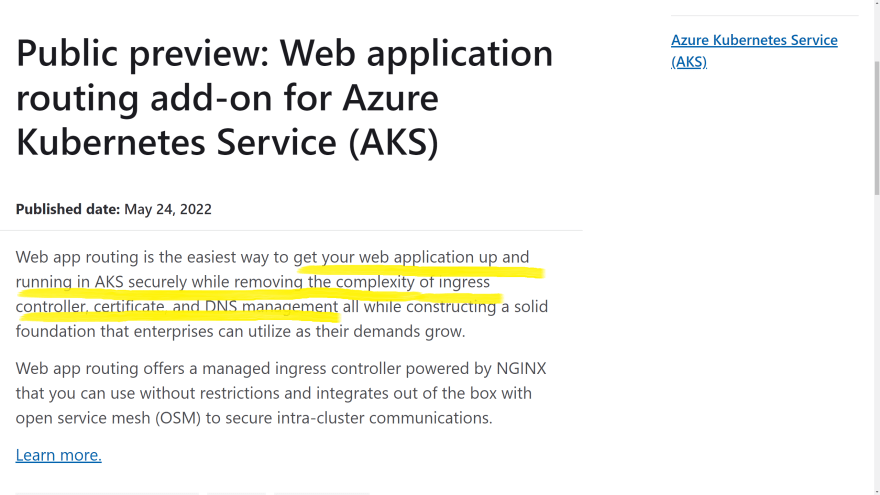 Web app routing helps you get your web application up and running in AKS securely while removing the complexity of ingress controller, certificate, and DNS management, and that the service offers a managed ingress controller powered by NGINX that you can use without restrictions and integrates out of the box with open service mesh to secure intra-cluster communications.

I’m curious to see this in action, let me know in the comments if you have already tried this out.

Next and final announcement that I’m going to cover today is another big one for me. Microsoft announced the public preview of a fully managed Grafana service in Azure. 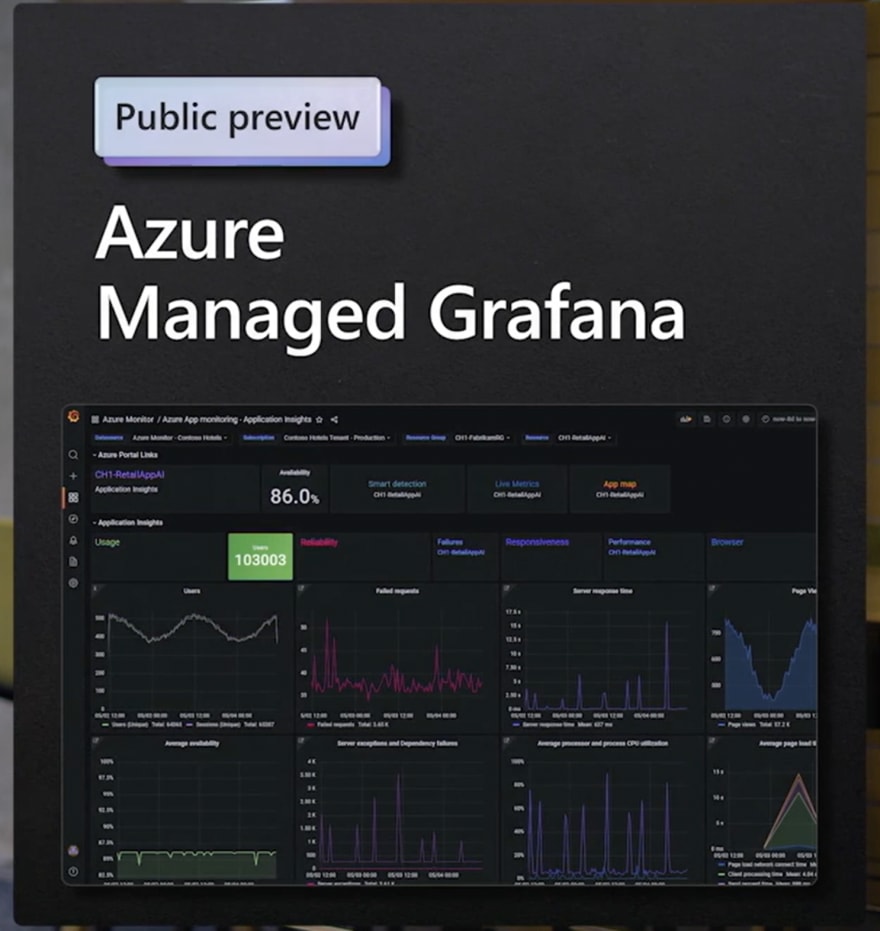 As I’ve mentioned, Azure Managed Grafana is a fully managed service for analytics and monitoring solutions. And it's supported by Grafana Enterprise, which provides extensible data visualizations.

You can provision the new Azure Managed Grafana and connect it to your AKS cluster, and with that you can see all the metrics and data provided by container insights, visualized in the familiar interface of Grafana. You can see information like requests per second, the resources that you're using for your pods, and all of the different things you need to run your application successfully.

And since Grafana is an open-source product, it's available to you in Azure or wherever you want to run it.

And yes, that dashboard you see above is automatically created when you provision Azure Managed Grafana and point it to AKS because the service is optimized for Azure-native data sources from services such as Azure Monitor and Azure Data Explorer.

These were for me the most exciting announcements around DevOps at Build 2022, but Microsoft made a lot more announcements so I’d recommend you to check the Book of News that they published to see them all. You can find the link in the video description.

Let me know in the comments below what do you think about the services and new features I’ve covered and what your favorite announcement from Build 2022 was.

Also, check out this video here in which I review a new way to connect to private resources without VPN.

The Cost of Production Blindness

Once suspended, n3wt0n will not be able to comment or publish posts until their suspension is removed.

Once unsuspended, n3wt0n will be able to comment and publish posts again.

Once unpublished, all posts by n3wt0n will become hidden and only accessible to themselves.

If n3wt0n is not suspended, they can still re-publish their posts from their dashboard.

Once unpublished, this post will become invisible to the public and only accessible to Davide 'CoderDave' Benvegnù.

Thanks for keeping DEV Community safe. Here is what you can do to flag n3wt0n:

Unflagging n3wt0n will restore default visibility to their posts.