In this post, you will learn how to setup an AWS ECS (Elastic Container Service) Cluster. You will create the Cluster and deploy a Docker image containing a Spring Boot App. Enjoy!

Amazon Elastic Container Service is a managed container orchestration service which allows you to deploy and scale containerized applications. An overview of the features and pricing can be found at the AWS website.

ECS consists out of a few components:

You will create a Docker image for a basic Spring Boot Application, upload it to ECR, create a Task Definition for the image, create a Cluster and deploy the container by means of a Service to the Cluster. At the end, you will also do something similar but including an Application Load Balancer.

At the time of writing, a new UI is being developed. For most of the actions described in this post, the New ECS Experience toggle has been enabled.

The Spring Boot App is a basic application with a Hello Rest endpoint which returns a hello message including the host where the application is running. The app is used before in a previous post. The controller is the following:

In order to be able to create a Docker image, you need to add the dockerfile-maven-plugin to the pom file.

You also need to add a Dockerfile to the root of the repository. The Dockerfile is following some best practices from a previous post.

Run the build in order to create the jar file and the corresponding Docker image.

Verify whether the Docker image is available in your local Docker repository.

Now that you have created the Docker image, you need to upload it to ECR, the AWS Docker repository. Navigate in AWS to the ECS Service and select in the left menu the Repositories section. First thing to do, is to create a repository by clicking the Create repository button. 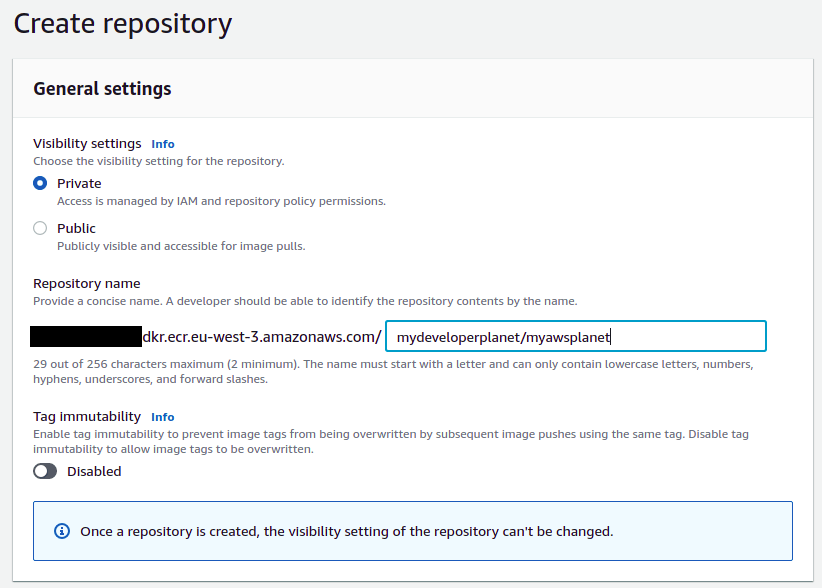 In order to see how you can push the Docker image to the repository, click the View push commands button which is available in the repository overview. 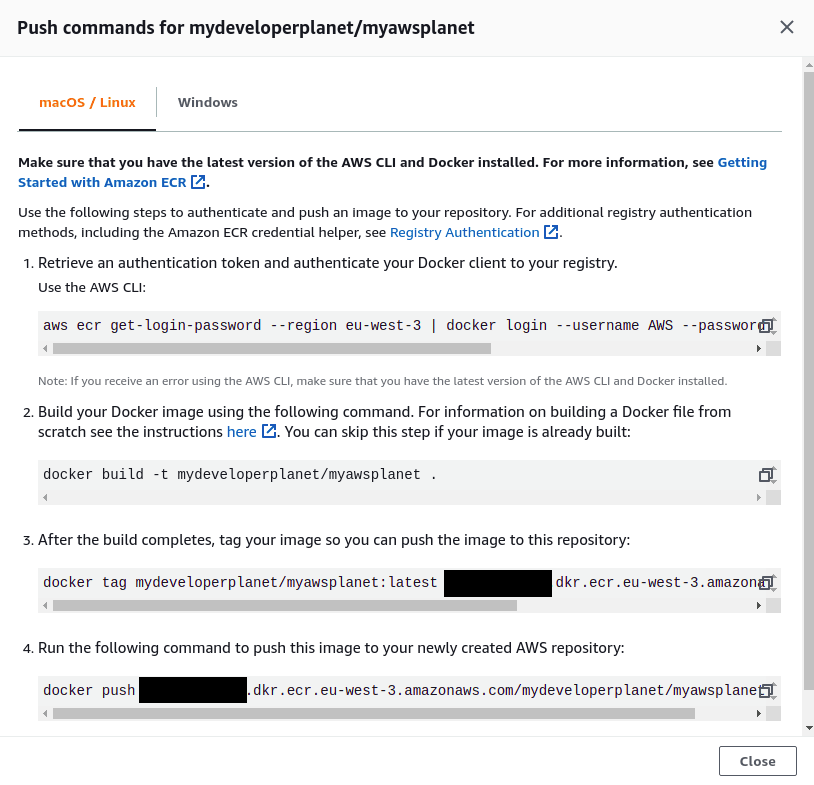 Execute step 1, which will provide you temporary credentials in order to be able to gain access to the repository. The <account ID> will be replaced with your AWS account ID.

Skip step2, building the Docker image is already executed by means of the Maven build. In step 3, adjust the command in order to use version 0.0.1-SNAPSHOT instead of latest for identifying the local Docker image.

In step 4, you push the local Docker image to the remote AWS Docker repository.

After successful upload, the Docker image is added to the repository.

In step 1, choose for an EC2 self managed task and click the Next step button. 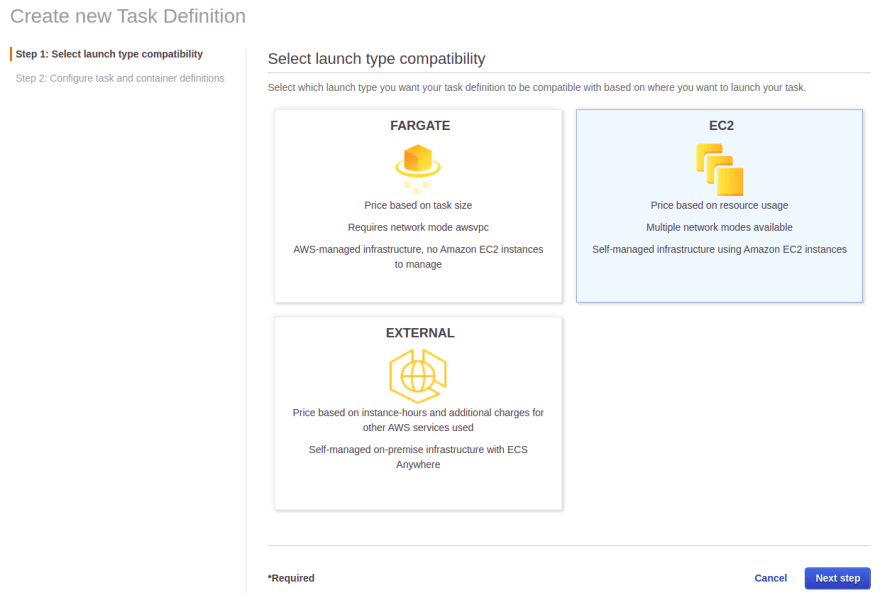 In step 2, give the task definiton the name myawsplanet.

Select a Task execution role in the Task execution IAM role section. This role is necessary for pulling the Docker image. If the role does not exist yet, select Create new role in the dropdown list. The Task memory and Task CPU fields are optional, leave them empty for now. In the screenshot below, the container is already added. See below the screenshot how to accomplish this. 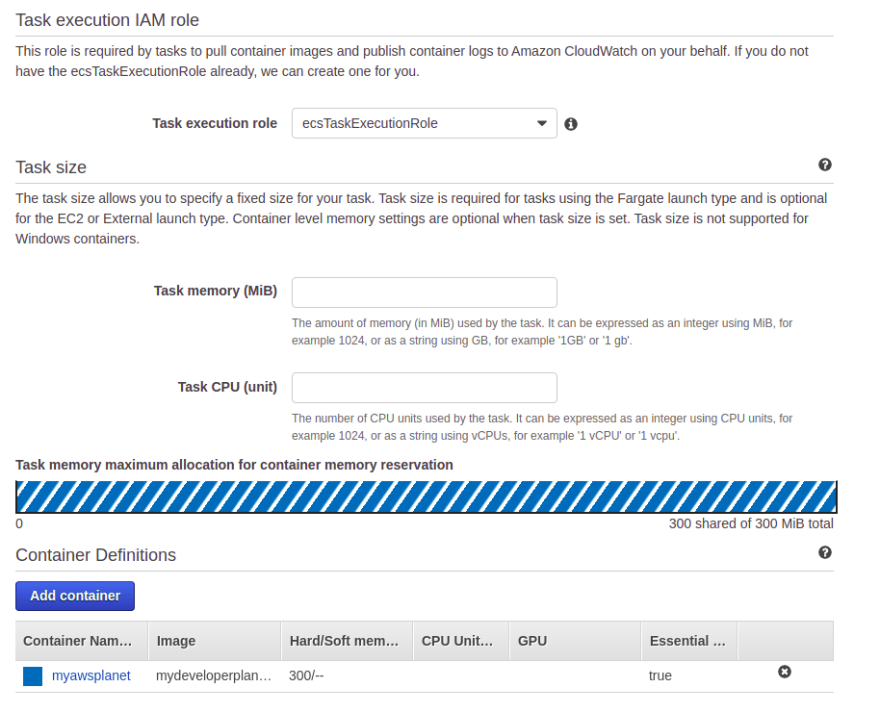 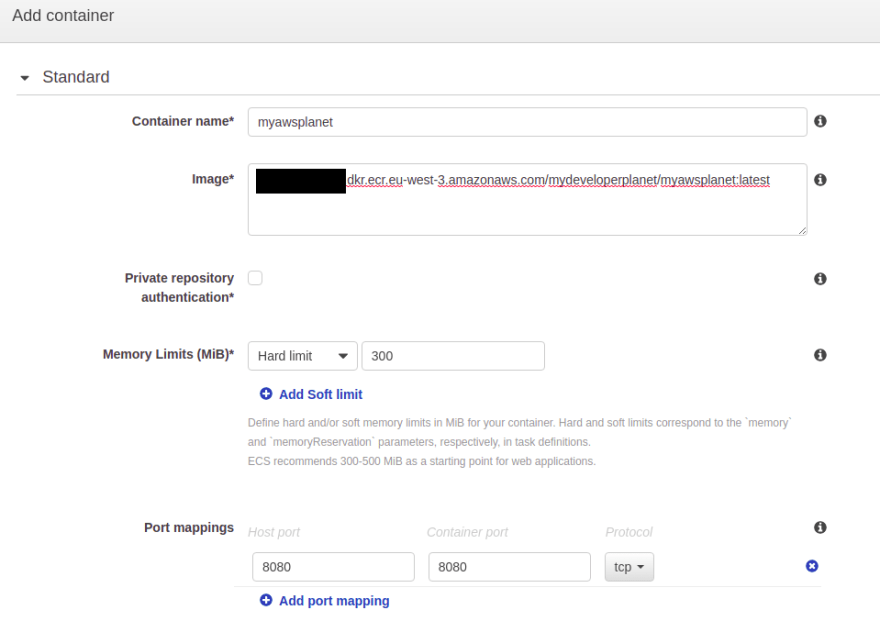 The only thing left to do is to finalize step 2 by clicking the Create button at the bottom of the page.

Navigate in the left menu to the Clusters section and click the Create cluster button.

In step 1, choose EC2 Linux + Networking and click the Next step button. 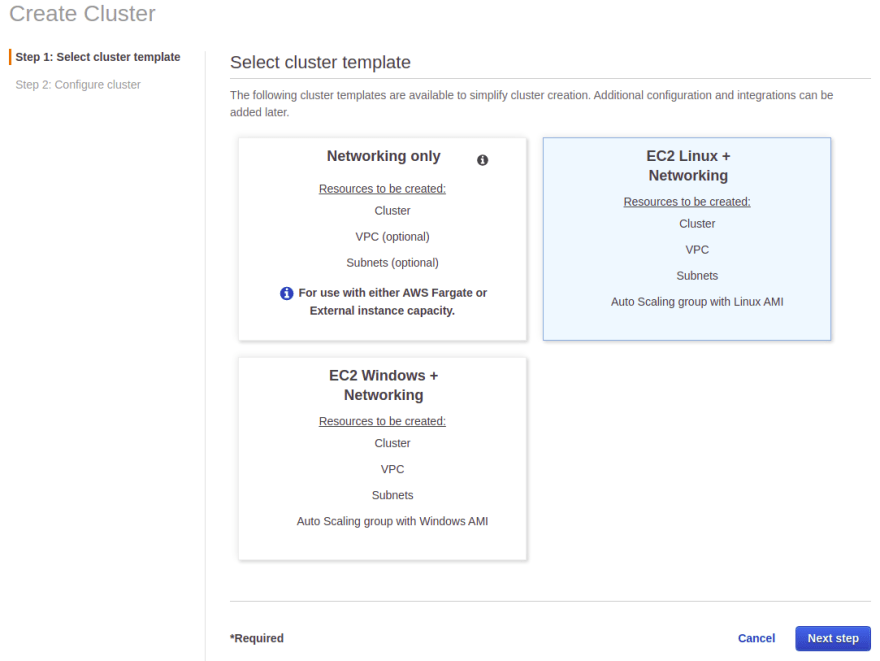 In step 2, give the Cluster the name myawsplanet and choose the t2.micro as EC2 instance type. This will allow you to remain in the Free Tier. Leave the other options as default. This will launch 1 EC2 instance into your Cluster. 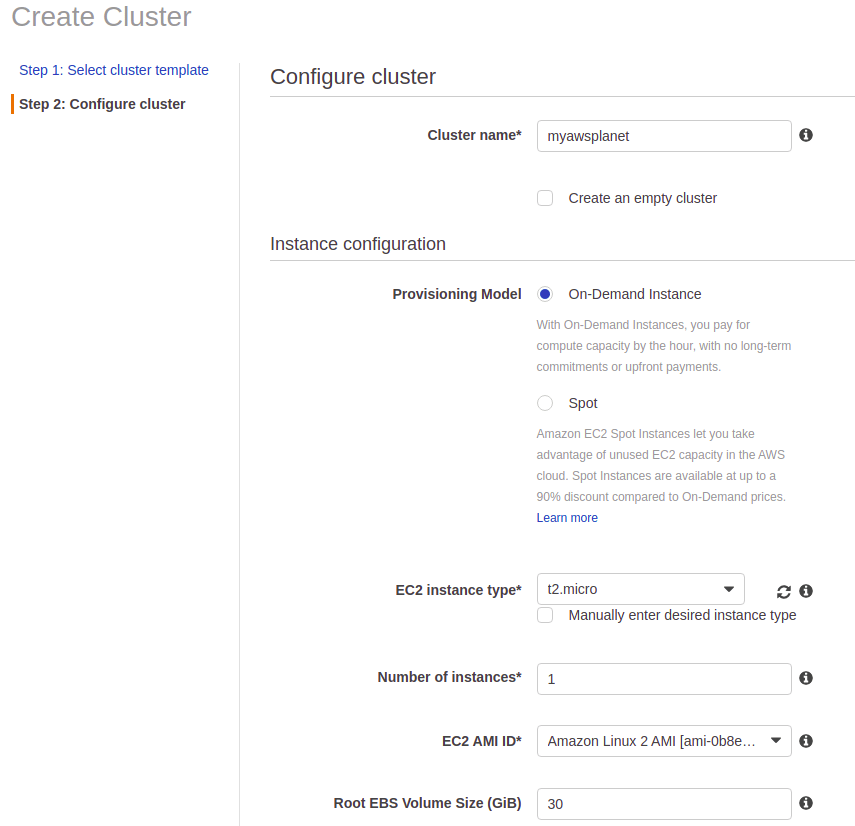 In the Networking section, choose the default VPC and select all available subnets. Choose Create a new security group as Security group. You can also choose a Key pair if you want to be able to SSH to the EC2 instances. In the screenshot below, SSH access is not enabled. 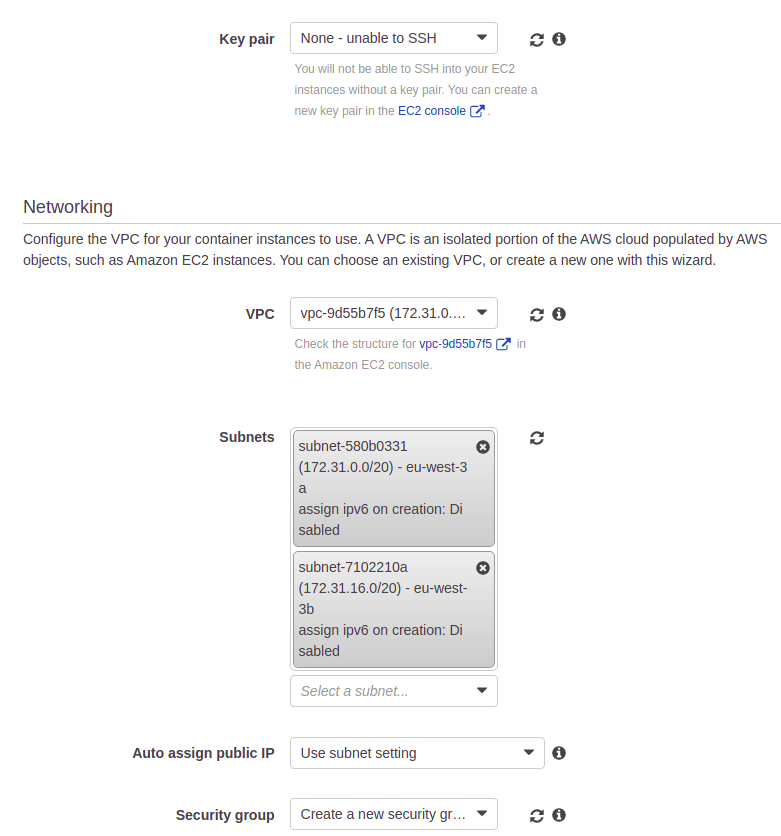 The new security group must allow all traffic for port 8080 otherwise the Rest endpoint will not be accessible. This is configured in the Security group inbound rules section. Next, choose a previously created Container instance IAM role or choose Create new role when this is the first time you are going to use this. Click the Create button. 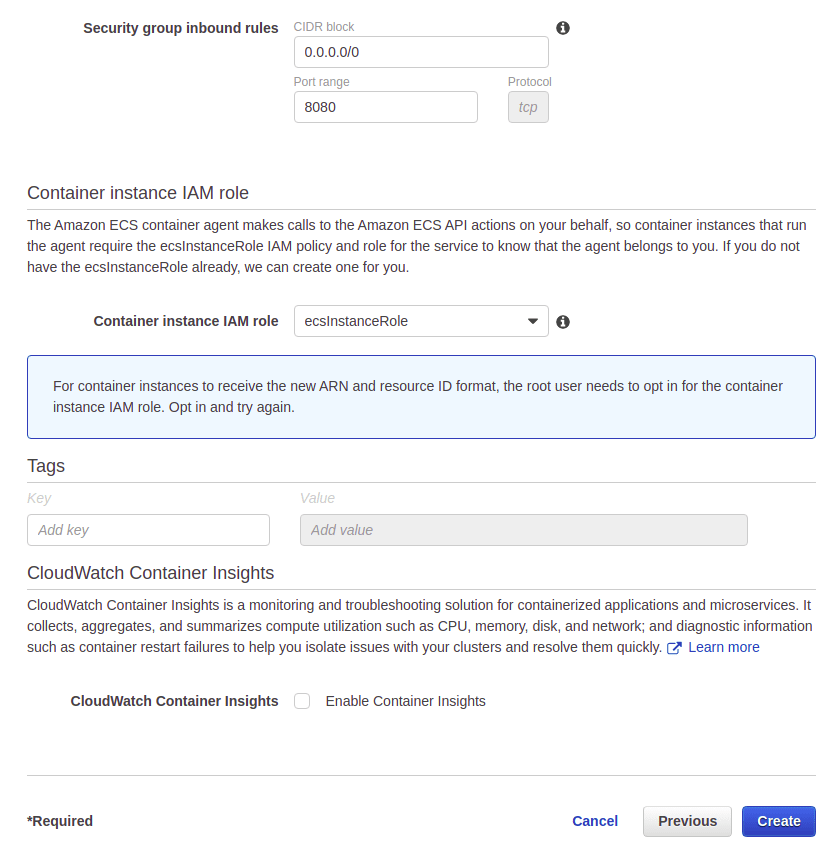 After a few minutes, the ECS Cluster is running. Navigate to the EC2 service and notice that the Auto Scaling group has been created and one EC2 instance is running. 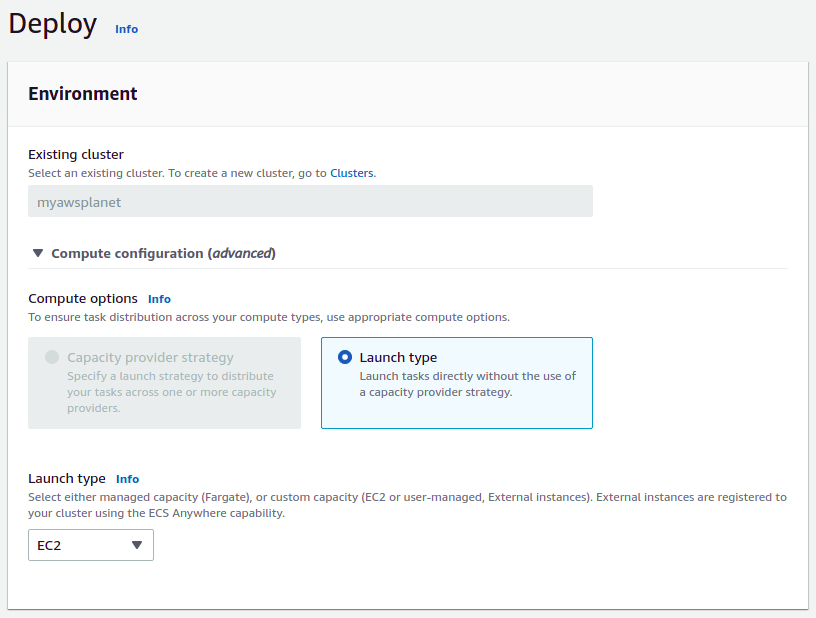 In the Deployment configuration section, choose the Task Definition myawsplanet as Family and choose the latest revision. As you can see, task definitons are version controlled. Give the Service the name myawsplanetservice and create the Service. 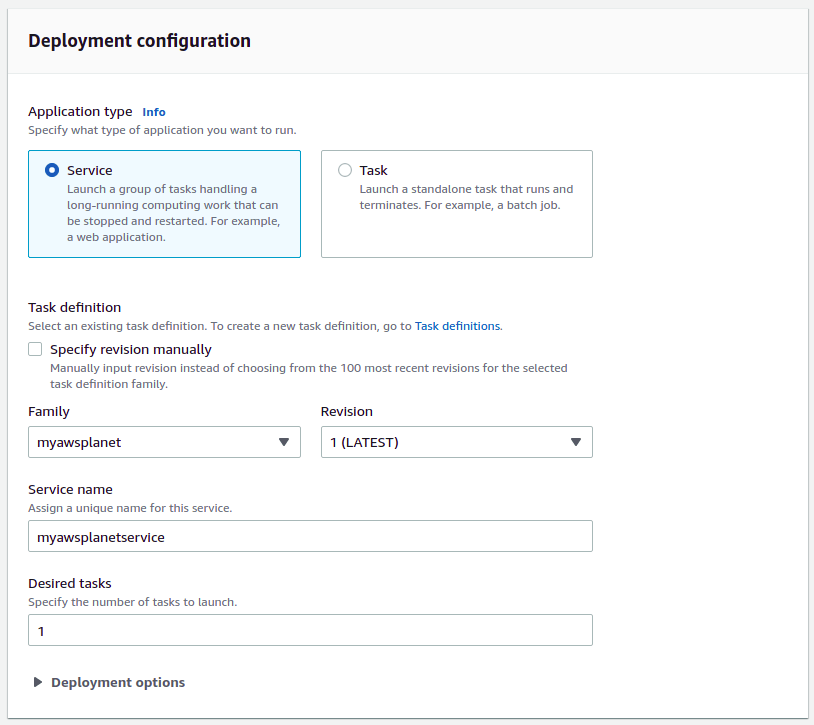 Navigate to the EC2 service and copy the public URL of the EC2 instance. Use this URL in order to verify whether the endpoint is accessible.

With the previous configuration it is possible to run more tasks with more EC2 instances. However, it is not possible to route the traffic for port 8080 to different containers running on 1 EC2 instance. In other words, you are limited to run 1 task at each EC2 instance. Solution for this is to create a Service with an Application Load Balancer (ALB). It is, however, not possible to edit an existing Service to use an ALB. Therefore, you need to create a new Service. The Task Definition itself can be reused.

First, you will remove the existing Service. Navigate to the Service and click the Edit button. Set the Desired tasks to 0. This is necessary before you can remove the Service (do not mind the Revision number in the screenshot below, I just messed around while creating this blog). Click the Update button and remove the Service. 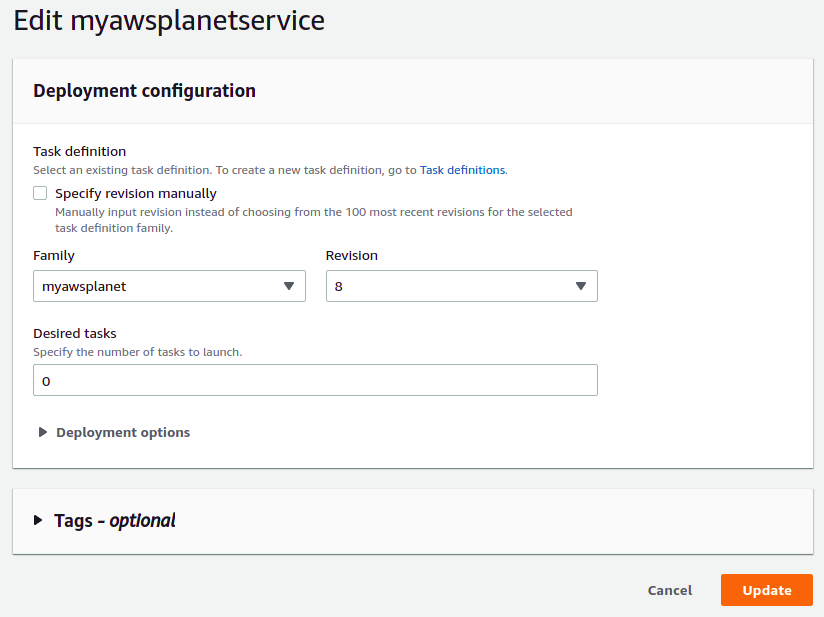 Navigate to the Task Definition and click the Create new revision button. Navigate to the container definition and set the host port to 0. This way, the ALB will choose a random port for the communication between the ALB and each Docker container. Click the Update button in order to update the container definiton and click the Create button in order to create the new Task Definition revision. 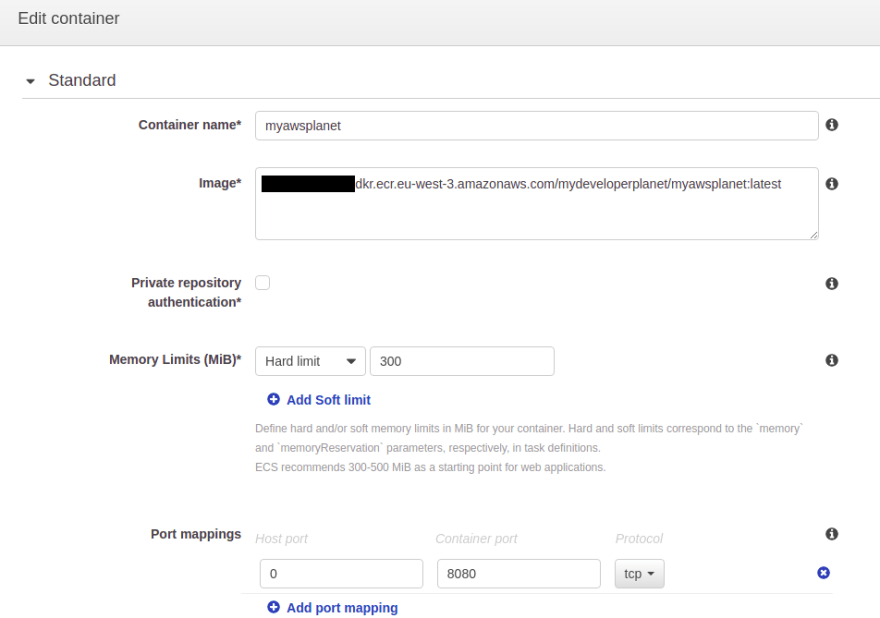 Create a new Service just like before, but in the Load balancing section choose for Application Load Balancer. Give the ALB the name MyAwsAlb and define port 8080 where the ALB should listen to. Give Target group the name ecs2containers and choose HTTP as protocol. Finally, click the Deploy button at the bottom of the page. 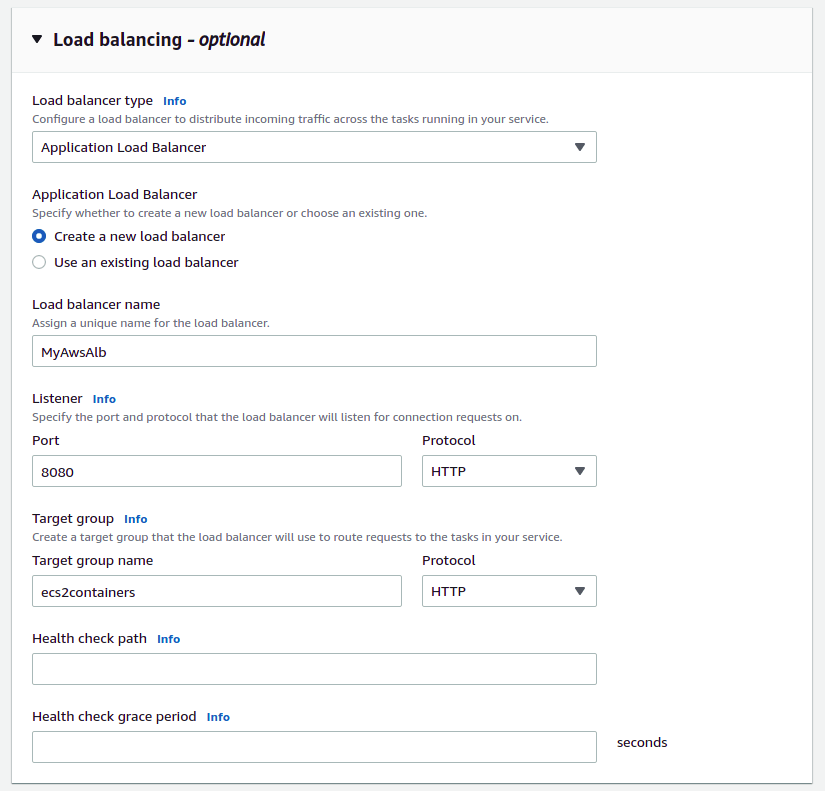 After a few minutes, the Service is created. Verify whether the Rest endpoint is accessible using the public IP of the ALB.

A time-out occurs, meaning that something is wrong with the Security Groups.

Navigate to the EC2 service to the Security Groups section. Create a new Security Group for the ALB where inbound traffic for port 8080 is allowed.

Verify again whether the end point is accessible and now it works!

The goal was to be able to deploy the image to multiple containers running on a single EC2 instance. Navigate to the Service and change the number of tasks to 2. Verify again with curl and you will notice that the IP is changing. Two tasks are running at one EC2 instance. It is possible that a 502 Bad Gateway occurs after updating the tasks, but this should stop after a few seconds.

Finally, let’s activate 2 EC2 instances by updating the ASG in the EC2 service.

In the ECS Service you can set the number of tasks to 4. 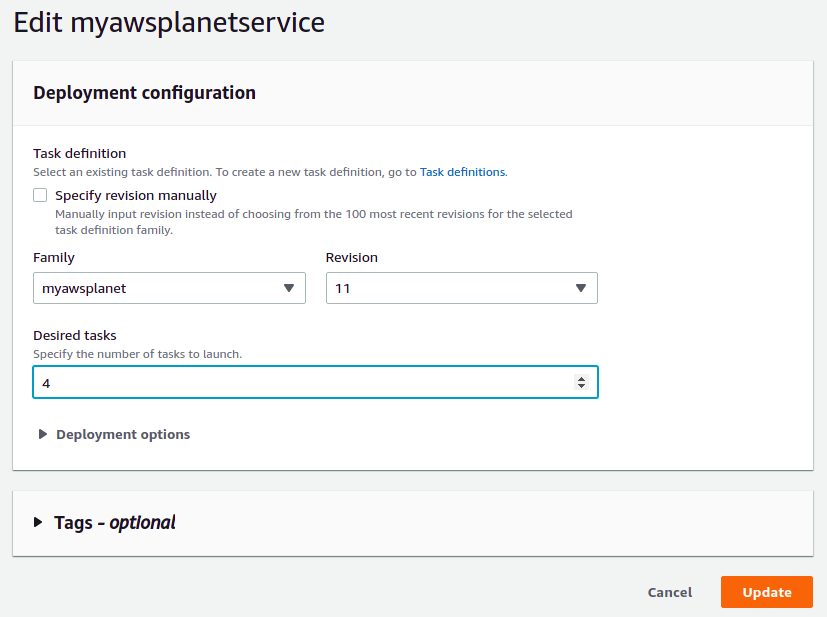 In the classic view (disable the New ECS Experience toggle), you can see that 2 EC2 instances are running with each 2 tasks.

Running curl again shows you that the four tasks are interrogated one after another.

Execute the following steps in order to remove all resources:

7 Ruby Standard libraries you should get to grips with