The following article describes the basic terminology and concepts of Terraform and can be used as a first step in working with Terraform.

Terraform resource is anything that can be managed via Terraform:) For example, it could be Azure resource group or AWS S3 bucket or GitHub repository, or anything else what supports terraform.

For creating Azure resources like Azure Key Vault or Azure SQL Database, Terraform needs to call Azure API. Terraform uses Azure provider for this purpose. Terraform provider is a plugin for Terraform. The provider incapsulates API Client for vendor API. You can use multipe providers in your project at the same time.

Providers are supplied by Hashicorp, API owners, or enthusiasts. You can find list of publicly available providers in Hashicorp Provider Registry.

You need to use Hashicorp configuration language (HCL) to declare resources you want to have. Instead of describing operations to create resource, you describe resources in declarative manner.
Terraform project is a set of .tf files. You can use Visual Studio Code or Jetbrains IDEA to work on it.
The following example declares Azure Resource Group:

Terraform state is a database storing the information of existing resources. As soon as Terraform creates a resource, it writes information into the state database.
Then Terraform compares HCL declaration of resources and information about resources stored in the state.
Terraform keeps the state and the declaration synchronized. It creates missing resources, deletes resources if they were removed from declaration, etc.
The following example shows the state for the resource group described above. As you see, it stores not only resource id in Azure but also properties like name and tags. 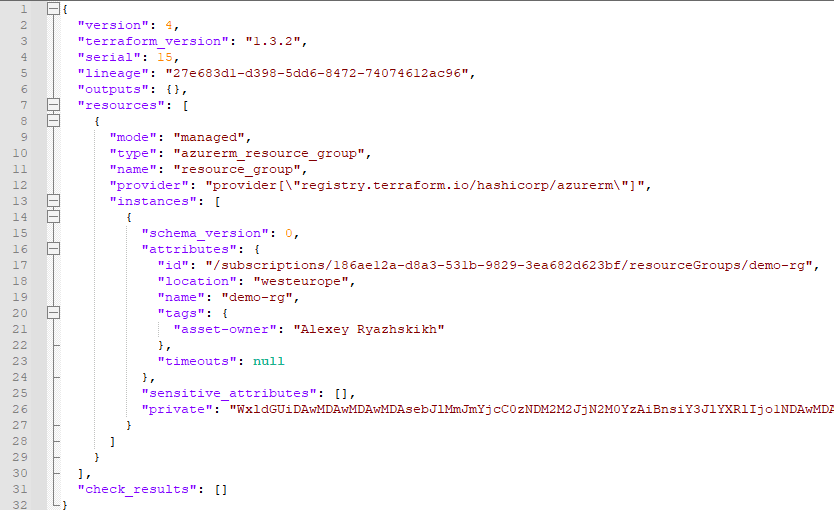 You can trigger changes with Terraform CLI.

Terraform module is the way how you can declare multiple resources at once with some parameters. So you can think about the module as a function that declares a group of resources.
The following example shows a module usage example that creates an azure resource group and role assignments under the hood:

Modules allow the creation of abstraction layers in your terraform code. For example, you can create a database module to add Azure SQL database. After some time, you might need to implement backup logic for all databases you declared. You can extend your database module with storage account declaration, and all databases declared with your module will get the storage account after updating to the new version of the module.
Modules can be declared localy for each terraform project, or can be published to private or public module registry: https://registry.terraform.io/browse/modules

Best Tools to Visualize your Terraform

Alexey Ryazhskikh
The Terraform downsides you should know
#terraform

Once suspended, musukvl will not be able to comment or publish posts until their suspension is removed.

Once unsuspended, musukvl will be able to comment and publish posts again.

Once unpublished, all posts by musukvl will become hidden and only accessible to themselves.

If musukvl is not suspended, they can still re-publish their posts from their dashboard.

Once unpublished, this post will become invisible to the public and only accessible to Alexey Ryazhskikh .

Thanks for keeping DEV Community 👩‍💻👨‍💻 safe. Here is what you can do to flag musukvl:

Unflagging musukvl will restore default visibility to their posts.