In this post we will talk about the not so new functional pseudo-class selectors :is() and :where().

We will see how they work in details, how they differ and when to use them to get the most out of these CSS features.

Let's start by the :is() pseudo-class selector. Then we will talk about :where() and the difference between them.

Originally named :matches() and :any(), :is() is a functional pseudo-class selector. Meaning it is a keyword recognized by CSS that consists of a colon (:) followed by the pseudo-class name and a pair of parenthesis to define the arguments.

:is() takes as an argument a selector list separated by a comma and selects any element that can be selected by one of the selectors in that list. Let's see some use-cases.

Suppose that we need to set the font-size of every paragraph element (<p>) located in a <section> or an <article>, we can use :is() to write that in a more compact form: 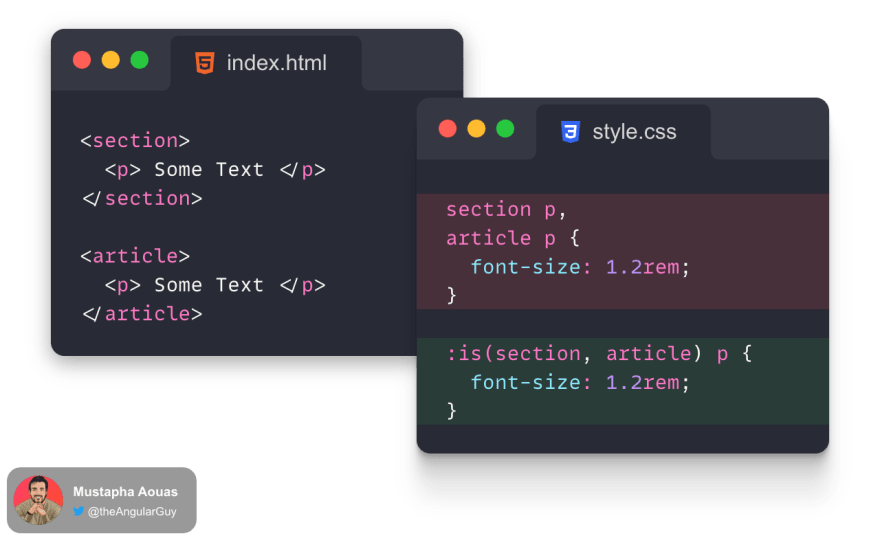 Of course, in this example, we only removed one line, but we'll see later that we can remove much more using this to write more compact code.

Now let's say we need to target every <b> and <strong> inside an <article> to set their font-weight property, here's how we can use :is() to do it: 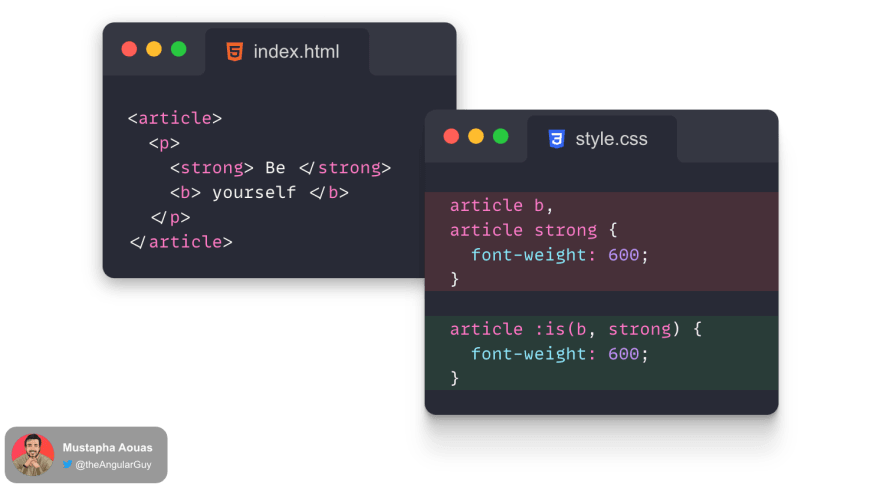 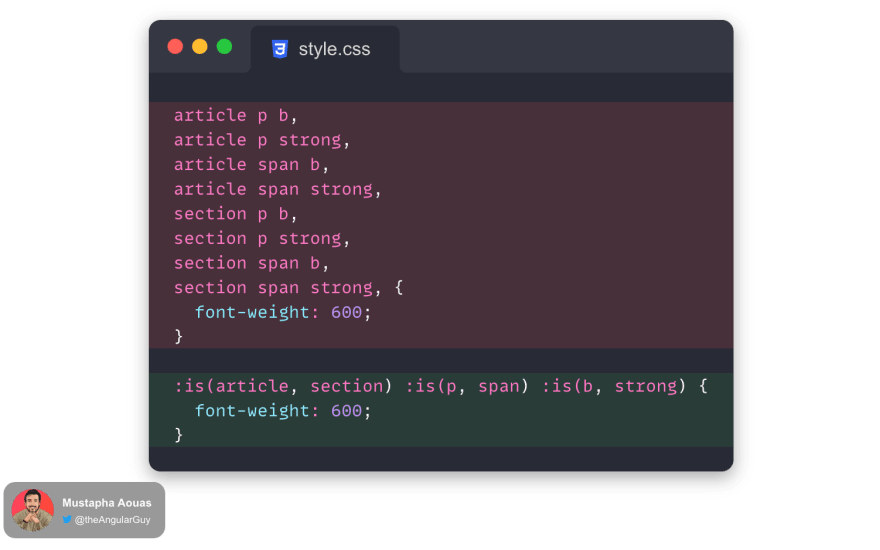 In the example above we can see that it makes the code much more concise. It also makes it more readable and easier to maintain in my opinion.

Applying is() to the current element

Like we saw before, the space between before :is() is important. If we remove it, to have something like this: article:is(b) we would be asking for an article element that is also a b element witch is impossible.

We could use :is() to check if an element is for exemple the first-child or last-child in witch case we don't put the space before the :is(): 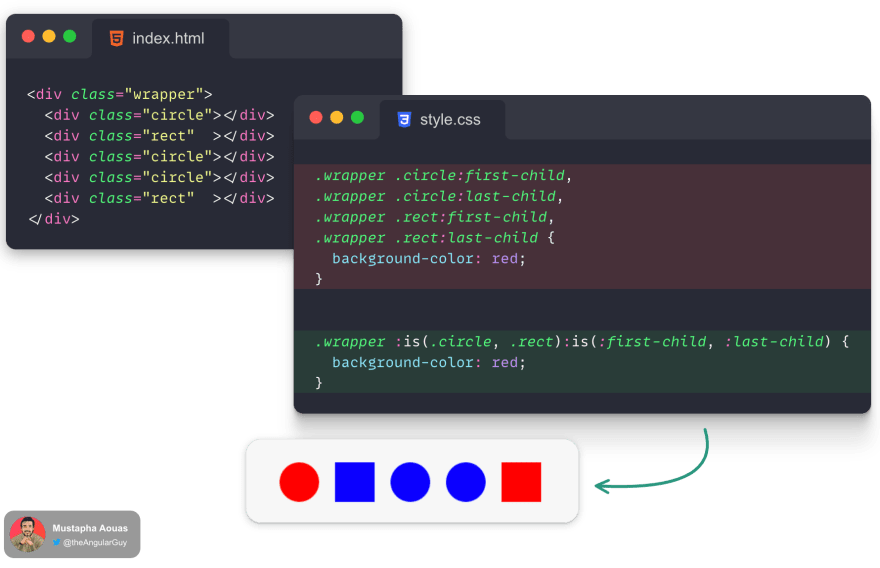 Typically, if any of the selectors in a comma-separated list are invalid, all of them will be invalid and the entire expression will fail to match anything. This is not the case while using is():

To see why this is important to keep in mind, let's consider the example below: 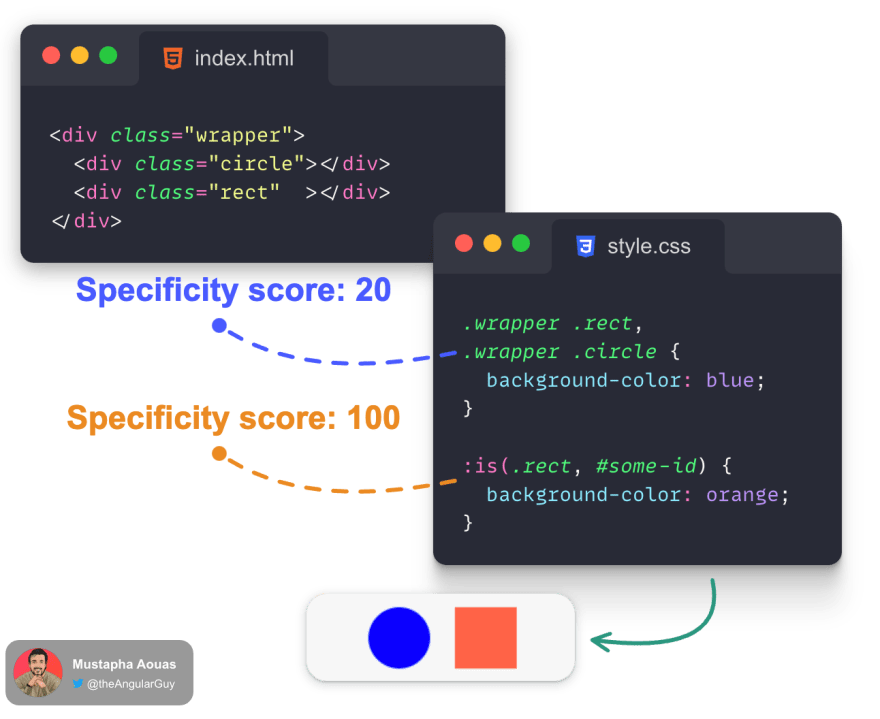 Now that we are familiar with the is() pseudo-class selector, let's talk about where().

where() is also a functional pseudo-class selector and works like is(). It takes as an argument a selector list separated by a comma and selects any element that can be selected by one of the selectors in that list. We can use it to target elements like we did with is() and it is also forgiving.

So why does it exists if it works the same as is()?
Well, because it doesn't work exactly the same.

The only difference is that the specificity of :where() is always zero. That's it.

Every time you want to keep the specificity low, which I think is a good thing to do most of the time.
So, for example, using :where() you can easily target an element by its ID without messing the specificity.

Both these functional pseudo-class selectors are supported by all evergreen browsers:

That's it for this post. We saw how to use :is & :where and the difference between them. But before you go and rewrite your entire CSS code base, remember that readability is what your team is used to, so it might be a good idea to discuss this before :)

Better Performance and Security by Monitoring Logs, Metrics, and More

A Year in DevRel

Once suspended, mustapha will not be able to comment or publish posts until their suspension is removed.

Once unsuspended, mustapha will be able to comment and publish posts again.

Once unpublished, all posts by mustapha will become hidden and only accessible to themselves.

If mustapha is not suspended, they can still re-publish their posts from their dashboard.

Once unpublished, this post will become invisible to the public and only accessible to Mustapha Aouas.

Thanks for keeping DEV Community 👩‍💻👨‍💻 safe. Here is what you can do to flag mustapha:

Unflagging mustapha will restore default visibility to their posts.