Originally published on the 1ppm blog.

People often ask me how I'm able to launch products so quickly. 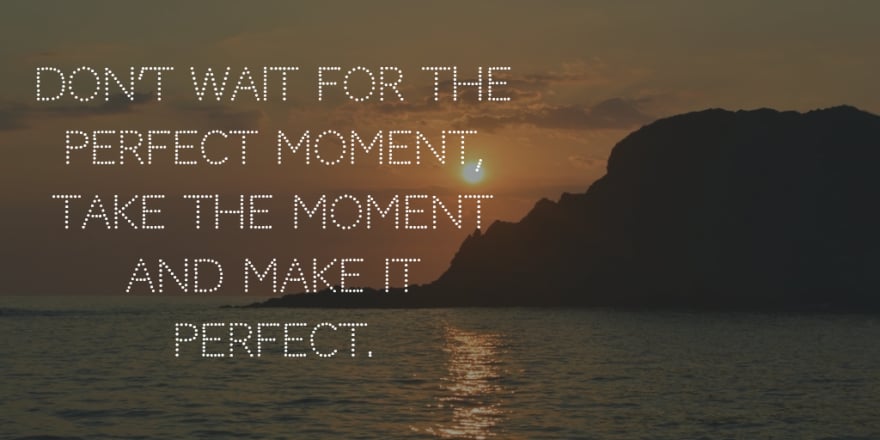 Don't wait for the perfect moment, take the moment and make it perfect.

I think that quote about sums it up, I don't wait for perfect. I take what I have and make it work perfectly for right now.

“Perfect is the enemy ofÂ good”

Variations of this phrase have existed for hundreds of years, but still today we become snared by the search for perfection.

Perhaps this comes from the fear of launching something and being criticized, or perhaps we really are trying to build the perfect product.

Without the normal deadlines that constrain us, side projects tend to take a life of their own with our targeted launch keeps getting pushed further and further out. We have just one more thing to fix, or one more small feature to add.

When I'm flying solo on a project, I try and impose a 2 week limit for working on a side project. If I can't get the project launch ready in 2 weeks, then I usually let the project slip.

When working with others on a project I modify my limit a little: Get the project launch ready with 2 weeks worth of work.

Working on side projects with other people means that you don't know when you or the other team members will have time to get to work. If you require meeting with the other team members, this can really hold things up. I try and keep the same 2 week limit on the project, but this is based on the amount of work I would normally do in 2 weeks, spread out over a longer time.

But it's notÂ Perfect

If you are not embarrassed by the first version of your product, you've launched too late.â€Š–â€ŠReidÂ Hoffman

But is it goodÂ enough?

The best thing you can do for your project, is to get it into the hands of real users. They are the ultimate judge of if what you've created is good enough, and even if it's perfect.

Yes you have your thoughts and opinion, but you're not building just for yourself (if you are then don't launch it, just use it!) You hope to have many users, and you need to know what they think.

But I reallyÂ can't

I love hackathons as a way of training your brain to launch. Forget two weeks, you typically have a day or two, but sometimes less to make something. You might not publicly launch it, but you have to be able to get it working and in the hands of others. Sharing your work to others is usually a big stumbling block, that hackathons can help you overcome.

Can't make it to a hackathon, you could try building something open source. Rather than waiting until you're finished to share the code, make it public right from the start.

I merged these two ideas during the last Super Bowl. As I watched Super Bowl LI, I also hacked on an idea. I had about 4 hours to make something. I made the source code available on github right from the first commit. I also deployed the app to a public server as soon as it worked.

Since I'm pretty sure I don't get thing right, let alone perfect, the first time, making in public removes any chance of wimping out and not launching.

No such thing asÂ perfect

I know it's hard to accept, but really there is no such thing as perfect. Just do your best and accept the feedback you'll get.

Some people will be mean, or just unpleasant, but for the most part the feedback will be constructive and will help you get better, and make your work better.

The community on ProductHunt is one of the best I've been a part off. Dominated by makers, their feedback is usually constructive, and the time they take to review products to give feedback is amazing. If you have a fear of launching give ProductHunt a try.

Originally published on the 1ppm blog.

Can we have Sprint Demo as a Service?