Here's a riddle. My web app keeps all of its data in a SQL database. I can spontaneously tear it down, deploy the code to a different hosting platform, and the app will still serve all the same data. Running my app in production costs $0.03 per month.

How is this possible?

That's easy. You have a separate database server running somewhere that stores all of your app's state.

No, my app never talks to a remote database server.

Oh, then you're using a proprietary, managed datastore like Amazon DynamoDB or Google Cloud Firestore.

Nope, my entire stack is open-source and platform-agnostic.

I combined SQLite, Litestream, and Docker.

My tool is called LogPaste. It allows users to generate shareable URLs for text files. I use it in my open-source KVM over IP device so that users can easily share diagnostic logs with me.

Sharing text files isn't exactly revolutionary, but serverless data replication might be. Here's a demo of me migrating my LogPaste app server between two separate hosting platforms: Heroku and fly.io. There's no database server or data migration step, but all of my data persists between platforms: 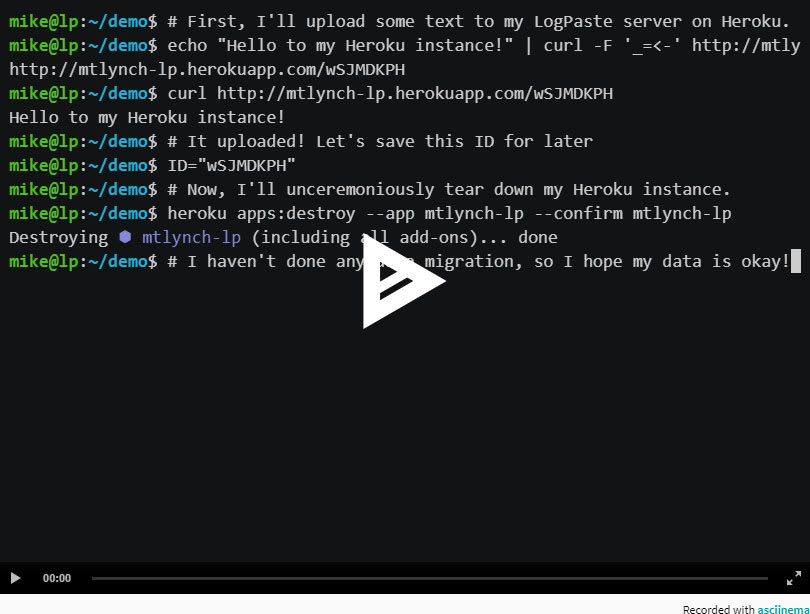 The best part is that I didn't need to modify my app's code at all. It just writes to a local SQLite database, and Litestream magically handles data replication in the background.

In this post, I'll explain how I integrated Litestream into my app and how you can do the same to replace your expensive, complicated database servers.

My shameful programmer secret is that I can't maintain a database server.

I've been building my own software products and services for the past eight years, and I've never used a database server in production. I don't want to be responsible for backups or software upgrades, so anything that requires MySQL, Postgres, or Redis is a dealbreaker for me.

Instead, I've always used Google-managed datastores like Cloud Datastore, Firebase, and Firestore. But every few years, Google builds a totally new datastore solution, deprecates its old one, and dumps all the migration work onto its customers. I didn't want to create another service on top of a tech stack that Google would probably kill off soon. 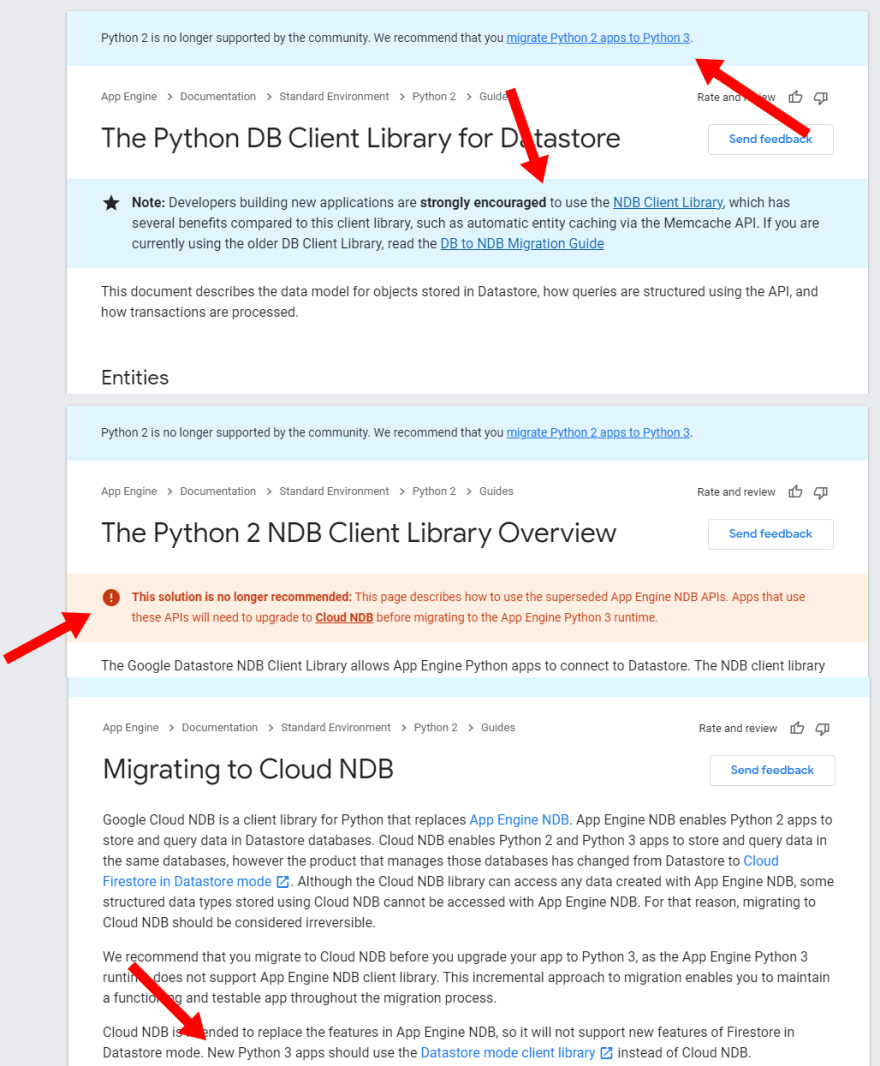 A few months ago, I saw that Ben Johnson, author of the popular Bolt database, had taken on a new project: Litestream. It's a simple, open-source tool that replicates a SQLite database to Amazon's S3 cloud storage. 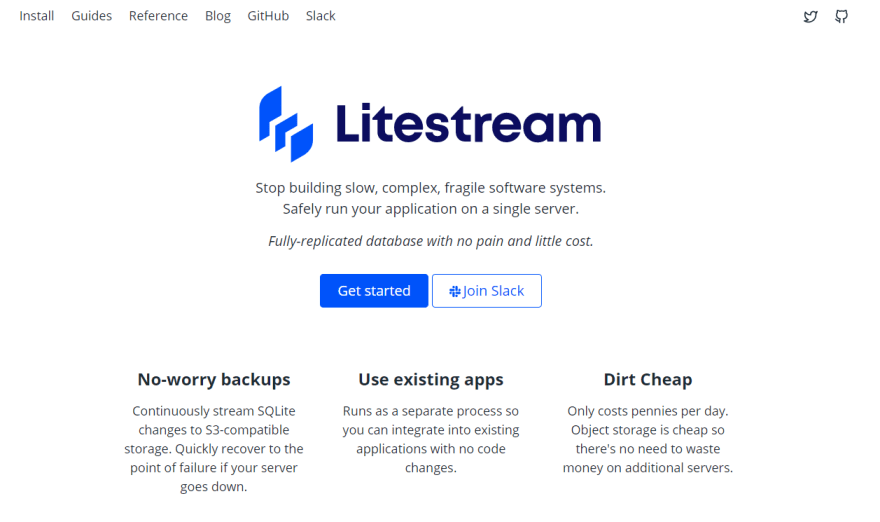 It seemed neat, but I wasn't particularly excited about it. I never use SQLite, so what did I care?

I didn't have anything against SQLite, but the design seemed impractical. Unlike other databases that send data to an external server over the network, SQLite writes everything to a local file. I always worried, "What happens if I lose that file?"

Thinking about it more, I realized I'd dismissed Litestream because I didn't use SQLite. But Litestream solved the very obstacle keeping me from adopting SQLite... Maybe this was worth a try.

Even better, Litestream could be my ticket out of Google Cloud Platform. SQLite runs anywhere, so I'd have freedom in choosing server hosting platforms. Litestream provides vendor flexibility on the storage side, as it supports any S3-compatible service, including BackBlaze B2, Wasabi, and Minio.

Litestream sounded rosy in theory, but you can't judge a technology until you test it in production. I needed a log upload service, and it seemed like the perfect project to test Litestream.

LogPaste needed to accept HTTP PUT requests from the command-line, so I wrote this simple HTTP handler in Go:

The InsertEntry implementation looks how you'd expect. It's a basic SQLite row insertion:

This allows LogPaste to accept HTTP requests from the command line like this:

That works, but it's writing the SQLite database to the local filesystem. I needed to integrate Litestream to enable cloud storage.

One of Litestream's biggest strengths is that it's completely independent of the application it serves. My LogPaste code never calls into a Litestream API, nor does it require any special configuration to allow syncing. Litestream quietly does its job in the background.

I created a custom Docker image to combine Litestream and LogPaste. Generally, Docker images should hold Just One Service, but I sometimes bend this rule to facilitate deployment. It's orders of magnitude easier to deploy a single, independent Docker container than two containers that need to coordinate with each other.

LogPaste's Dockerfile starts by building the LogPaste binary from source, and then it pulls down the Linux executable for Litestream.

Next, Docker copies a custom litestream.yml file into the image. This is Litestream's configuration file.

You can hardcode these values into the configuration file, but Litestream supports environment variables and interpolates them at runtime. That's a convenient feature, as it allows you to keep your litestream.yml file under source control without storing any sensitive credentials. It also makes the Docker image portable — anyone can create their own LogPaste server by reusing my image and setting environment variables for their cloud storage bucket.

The next bit of Litestream logic is in LogPaste's docker_entrypoint script, which runs when the Docker container launches. It starts by pulling down the app's latest database snapshot from cloud storage:

Next, the entrypoint script spawns a Litestream process, which watches LogPaste's SQLite database and continuously streams any changes to cloud storage:

The minor hack is in that trailing &. It tells the script to run the Litestream process in the background, which is how I can execute two long-running processes in the same Docker container. Ben Johnson has published a cleaner solution, but I'm using the hacky version for ease of demonstration.

The entrypoint script ends by launching the Logpaste app, which is a simple HTTP server:

To run the Docker container with all the environment variables populated, I use this command:

Here's how it all fits together in production: 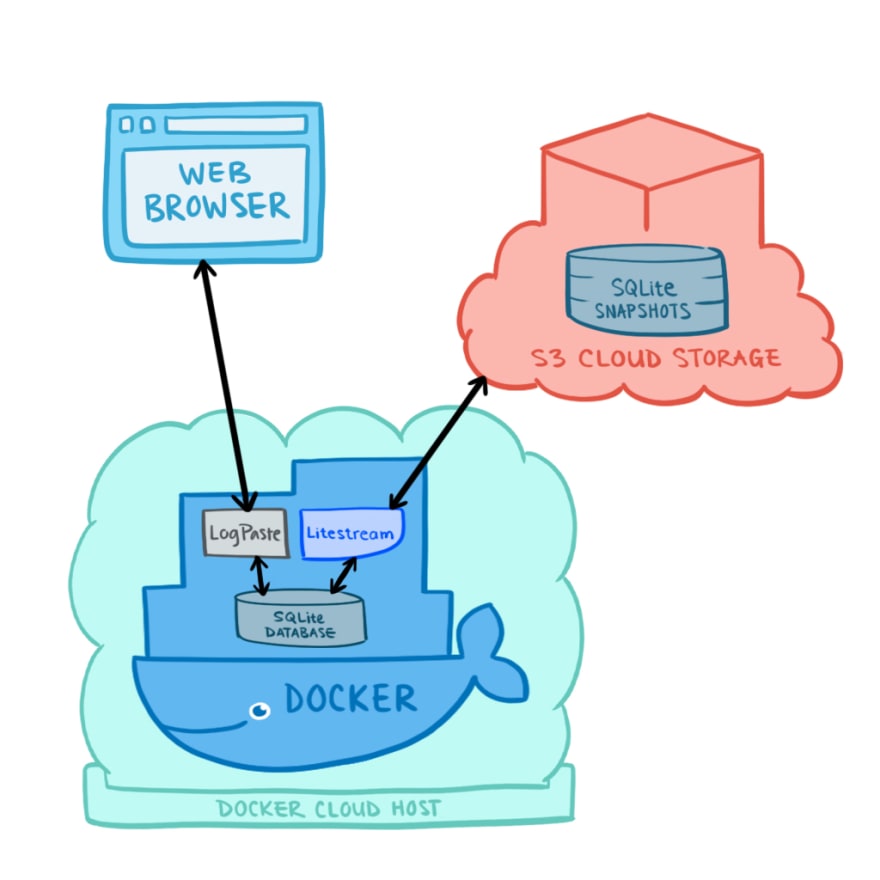 I'm using LogPaste in production for TinyPilot, my open-source KVM over IP device. Because users run my software on devices they own, I can't see any diagnostic information when they report issues. LogPaste provides a convenient way for users to share their logs with me.

LogPaste has handled all of TinyPilot's debug logs for the past few months, and it's worked well. The cost for data replication truly is just $0.03 per month:

My use case is, admittedly, fairly gentle. Only a handful of users upload their logs each day, so there may be pain points with this setup under heavier workloads.

It's also important to note that Litestream can't resolve conflicts between multiple database writes, so each database can have only one application server with write access.

Still, I've been incredibly impressed with Litestream, and I'm eager to use it in more scenarios.

If you want to host your own instance of my LogPaste app, it's easy to deploy. You can even customize the text on the homepage so that it says your product's name instead of "LogPaste." 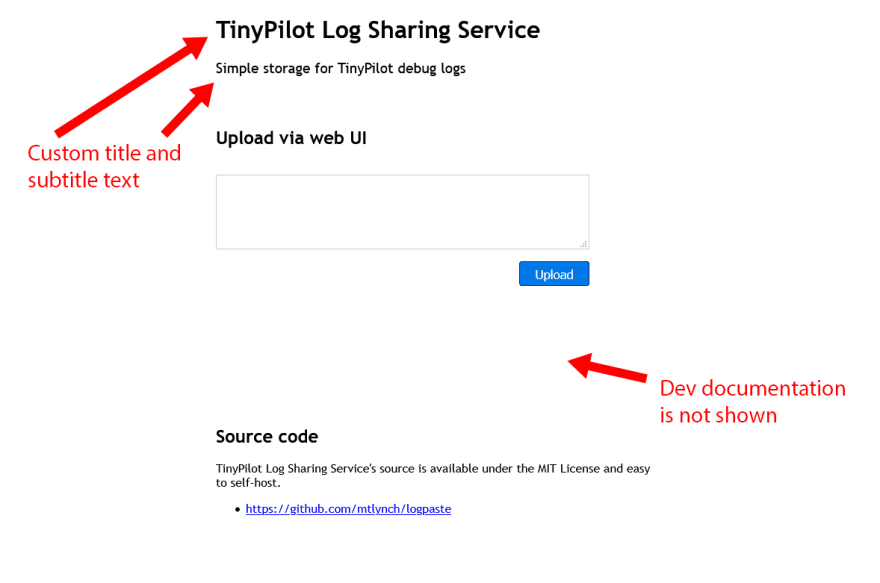 Thanks to Ben Johnson for his work on Litestream and his early review of this article. Thanks to the members of the Blogging for Devs Community for providing feedback on this post.

My first contribution to prometheus