I just got the news from The Testing Kit that Selenideium Element Inspector with which test automation teams can save hours daily by automatically generating selectors for Selenide, Selenium, Cypress, Playwright, Squish and TestCafe has been added to the prominent list of Software Testing Tools & Resources which is a curated library of tools & resources to supercharge your testing.

A few days ago I have created the Selenedium Element Inspector Twitter account to have a platform for its users where they can ask for help share their experiences, request features, and we can also discuss any test automation topics.

I was happy at the selenideium username was available. And as Grammarly always underlined this word, no I added it to its dictionary. 😊

To celebrate this great news, I have written a small recap about the short but successful history of the plugin. Here it is:

Only a few days after reading an article about how to create a Chrome Extension in 15 minutes I came up with the idea of Selenideium Element Inspector.

Since I read the article, I was thinking about what kind of Chrome plugin could be useful for myself and also for the testing community.

I still remember, it was a Sunday afternoon. I was sitting in my bed, writing an article and then I suddenly came up with the idea of having a plugin with which I can automate generating the selectors for Selenide, Selenium Java, Selenium Javascript, Selenium Python, Selenium C#, Playwright, Cypress, TestCafe and Squish.

Ok, I have to admit at the beginning I defined a Minimum Viable Product(MVP) to be able to quickly deliver value for the test automation community.

In the end, I realized the Chrome extension would be much more useful in case I add another type of selectors, so I added the following locators:

The process is very simple, I create the selector, then use it and in case it locates only one element then I print it on the console.

It took only 3 hours (testing included of course) to develop the first version of the Selenideium Element Inspector Chrome extension.

I have submitted it to the Chrome Web Store and I started to pray to be approved.

I consider contributing to the open-source community very important, which I also did in the last few months by creating frameworks for Selenium - Cucumber, Protractor, Appium, RestAssured and Karate DSL with which you can jumpstart your test automation project and I also started a tutorial on Selenide.

You can find the source code of Selenideium Element Inspector on GitHub.

However, I submitted it on Sunday it only took 3 days to approve my extension. I was really surprised as it is written that it can take even 30 days to approve your plugin.

During the 3 days, I have already written Save dozens of minutes daily during writing Selenide and Selenium E2E automated tests using the Selenideium Element Inspector Chrome Extension!. I was only waiting for the approval. A few minutes after the approval I have published the article and shared it on LinkedIn, Selenide User Group which we created together with Andrei Solnstev who is the developer of Selenide, Test Automation group and also to Selenium User Group.

I won't link the latter one as they do not deserve it. I really enjoyed being a member of the group. I have learnt and helped a lot there.

I have submitted 2 of my articles (Selecting an End to End Testing Framework - Selenium or Selenide?, Selenide, I think this is the beginning of a beautiful friendship) about Selenide which is built on top of Selenium WebDriver and it is superior to Selenium as it has the same feature set and much more: easier syntax, advanced selectors, built-in profiler, no more StaleElementReferenceException and much more.

It took a few days to realize my posts has been deleted without any notification about it. I have contacted Mike Veinder one of the admins of the group and asked him why he deleted my posts.

He said it was not him, but most probably because it was a self-promo.

I was standing there stunned. I wrote an article about a framework from which all the Selenium community could benefit- and the post was labelled as self-promo. I couldn't find words.

Whenever I released the plugin I wrote the post about it (Save dozens of minutes daily during writing Selenide and Selenium E2E automated tests using the Selenideium Element Inspector Chrome Extension!) I also posted in the Selenium User Group.

I was sure this time it won't be deleted, as it is not about Selenide but Selenium and as it is very useful for the test automation community.

Well, my post was deleted. I again contacted Mike Veinder and again I got the answer: self-promo. So sharing your knowledge counts as a self-promo. What a useful and logical rule. 😊

He was so nice he reposted my article , which got some attention there.

A few days later Mike Veinder posted about an upcoming event called The Future Of Testing Frameworks. I was so excited about the event I decided to participate.

I took notes during the presentations so I could create my own subjective report. So this is how The Future Of Testing Frameworks - A report by Miki Szeles.

As it was Mike Veinder who posted about the event, I thought he will be happy about having a post about it.

I was totally wrong. He deleted my post and banned me from the group. He said this group is not for me. He was partially true. Despite the great community I do not really want to be a member of a group with such admins as Mike Veinder.

I was shocked, so I contacted him. I kindly asked whether I can rejoin the group in case I won't post any more articles, as I wanted to learn and help the community.

The answer was blocking me on LinkedIn.

As I usually try to learn something even from bad happenings, I looked for other relevant groups and this is how I found Selenium Automation Testers and Selenium Testing. In comparison to the Selenium User Group, they really would like to help the community with all available resources and they are not envious of anything which is not pure Selenium.

Sorry for this venting, but I really wanted to let the steam go from myself. 😊

Right after I published my post in Test Automation LinkedIn group I found out there is a very similar plugin , about which I wrote an article: SelectorsHub - an awesome XPath and CSS Plugin.

In case you are curious about which plugin you should use let me quickly help you: Both. 😊

Despite b eing very similar both have a different goal, in case you are interested in the whys, just read the article.

One week after the first release I already came up with the next version as I wanted to provide more value to the community.

I think it is quite a nice and useful feature list.

I have committed the last change on 18th February and it has been approved on 21st of February 2022 whenever I immediately posted my article about it: Selenideium Element Inspector v1.2 has been released. 😊

I am a smoker and also a very friendly guy, so during my 3 months of probation period, I had the opportunity to have a few words with almost all the smokers. 😊

As it is very easy and straightforward to add a new framework to the plugin I decided to support all the other major testing frameworks Cypress and Playwright (Appium is still on my to-do list).

So I published the article Selenium JavaScript Python C#, Cypress, TestCafe, Playwright, Squish selector generation has been added to Selenideium Element Inspector v2.0 and shared it on all possible social media channels. 😊

It took only 2 days to receive my first bug report , which is awesome as it means people are using my plugin, and they took the step to share their feedback.

The TheDevilOfJesters took his time to report I have written Selenium Java 3 times on the options page instead of Selenium Java, Selenium Javascript and Selenium C#. I have immediately answered him, but I still have to take the time to fix it, but luckily it is not a showstopper bug as you can easily find out which option means what. 😊

Jester was so kind he even left me a 5-star review in the Chrome Web Store. I quite it here to make sure I will never forget it:

Installed just this morning, only toyed with it a little so far but can easily see it'll be helpful in a few projects I currently am working on.** The developer is actively engaged and dedicated to the progress of this extension, replying to my issue a mere hour after I posted it on a weekend. **** Looking forward to seeing how far this extension can go and hoping it's a mainstay of my developer chrome profile since it will hopefully be useful enough to stay installed long term.**

On the very same day, the new version of Selenideium Element Inspector 2.0 has been released with a huge new feature set :

9th March 2022 - Selenideium Element Inspector has been listed on testdev.tools

And we are here today. I just got the news a few hours ago via Twitter that Selenideium Element Inspector Chrome Extension has been listed on testdev.tools. 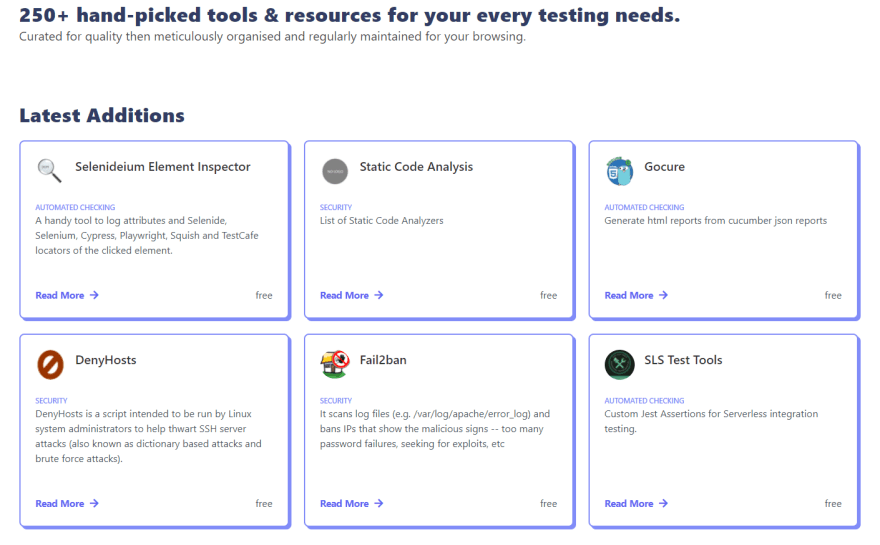 testdev.tools is a curated list of more than 250 Software Testing Tools & Resources to supercharge your testing.

I am very proud of this achievement. 😊

Ok, that is the present, but what about the future?

The future of Selenideium Element Inspector

At the moment I only have 2 elements on my list :

All the other depends on you. Any feature request is warmly welcomed. 😊

Thanks for reading the brief history of my Chrome plugin. I really appreciate it.

You can download the plugin from the Chrome Web Store.

📚 Join the Selenide community on LinkedIn! ✌

P.S.: Support the test automation community by sharing this article. 👍

In case you do not want to miss my posts , just follow me here on Hashnode, on LinkedIn, on Twitter on Medium.com, on dev.to and even on Instagram. 😊

Why I'm switching from C# to Python with Selenium

Once suspended, mszeles will not be able to comment or publish posts until their suspension is removed.

Once unsuspended, mszeles will be able to comment and publish posts again.

Once unpublished, all posts by mszeles will become hidden and only accessible to themselves.

If mszeles is not suspended, they can still re-publish their posts from their dashboard.

Once unpublished, this post will become invisible to the public and only accessible to Miklós Szeles.

Thanks for keeping DEV Community safe. Here is what you can do to flag mszeles:

Unflagging mszeles will restore default visibility to their posts.