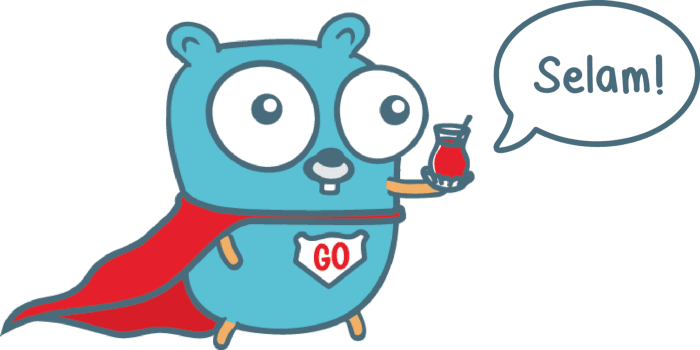 Greetings, in this article, I will tell you how we can increase the test performance of our HTTP servers in the projects we have developed with Go.

Recently, while I was working on a new feature for an application we were developing, I realized that I could commute to get coffee while waiting for unit tests to complete. And it was not possible to run the tests in parallel. If we wanted to run it in parallel in its current form, this test period could have taken much longer.

Now, let's take a brief look at the content and move on to the details of our subject.

Let's take a look at what we need to do when we want to run a simple HTTP server with the Go language.

When we want to run a server that we wrote using the Go standard library, we use the ListenAndServe method.

Let's take a look at the details of the ListenAndServe method:

Now let's look at the details of the server.ListenAndServe() method:

Finally, let's look at the details of the srv.Serve(ln) method. I've removed some code so it's not too long.

The part that we should pay attention to here is the l.Accept method.

The summary of the process done in the codes I have shared so far is actually:

So far, we have seen the process of creating an API in its basic form.

Now, I can hear you slowly saying, "Well, sir, what will they do in real life?"

Don't worry, we'll soon see how we can improve our testing performance using this information.

Now let's take a closer look at these two basic types included in the HTTP package.

We see that these two types are actually interfaces.

Now let's look at how the http.Client object is used, which allows us to make HTTP requests with Go.
There are two methods of sending requests using the Go HTTP package.

In other words, both methods do the same thing in the background.

Now let's look at the fields that we can customize when creating the http.Client object.

http.Client provides all connection establishment processes with RoundTripper interface. And it uses the Transport object as a RoundTripper implementation in itself.

If we want, we can create this Transport object ourselves when creating http.Client.

The Transport object we created has a method called DialContext. This method is the method that enables connection opening in the background, it returns a value of type net.Conn as a variable.

In a moment, we will combine this information and the information that the server.Serve method we just saw is listening for connections with net.Conn using the accept method of the net.Listener variable that takes as a parameter.

Little by little the pieces are falling into place, aren't they?

Finally, there is another method I would like to mention: net.Pipe(). It returns two net.Conn type variables as return value.

One of these variables can be used as a writing point and the other as a reading point. So what does this mean? How can we use this?

First, let's take a look at the Fiber library, which we often use in our projects and to which I contribute.

Writing a test with Fiber is quite simple because it contains a direct Test method.

Now let's look at a sample Fiber application and how it was tested:

Here we need to pay attention to the line app.Test(r, -1).

We're sending our HTTP request here so we can test it.
So how did this HTTP request go without calling app.Listen(":8080") which we normally do to run a Fiber application and make it listen on a port?

Let's take a look at what's behind the app.Test() method (you can access all the code here):

When we examine the code, we see that Fiber actually creates its own connection objects by conn := new(testConn) in order to test the application, as we explained in the net.Pipe() section.
It writes the HTTP request to this conn object and sends this conn object to the server with the app.server.ServeConn(conn) call.

So what happens when we say app.Listen(":8080") in Fiber app normally? Let's take a quick look at this:

Here we see that Fiber does the net.Listen() operation within itself and gives the listener object it created to the server by saying app.server.Serve(ln). The server listens to the connections from this listener object and passes it as a parameter to the serveConn() method.

In other words, it implements an approach that brings together the Listener and net.Conn objects that we explained at the beginning, allowing us to test it without physically listening to the port.

Fiber is an Express inspired web framework built on top of Fasthttp, the fastest HTTP engine for Go. Designed to ease things up for fast development with zero memory allocation and performance in mind

These tests are performed by TechEmpower and Go Web. If you want to see all the results, please visit our Wiki. 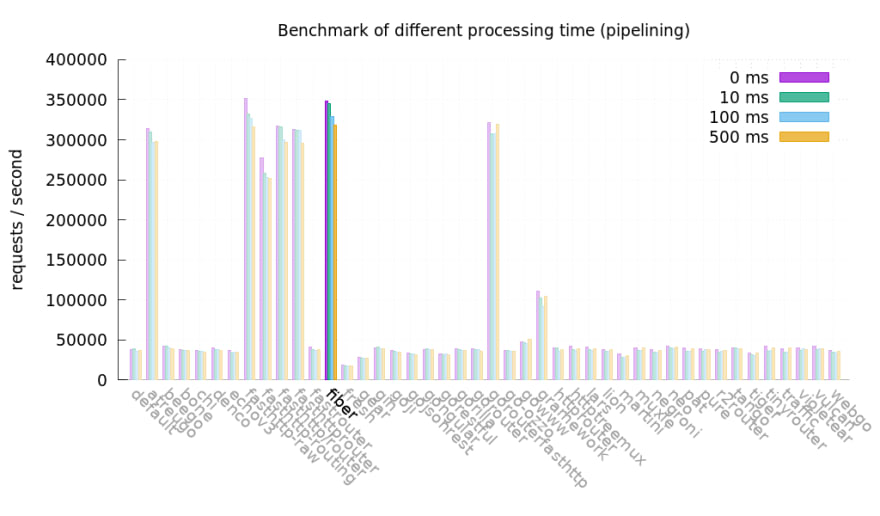 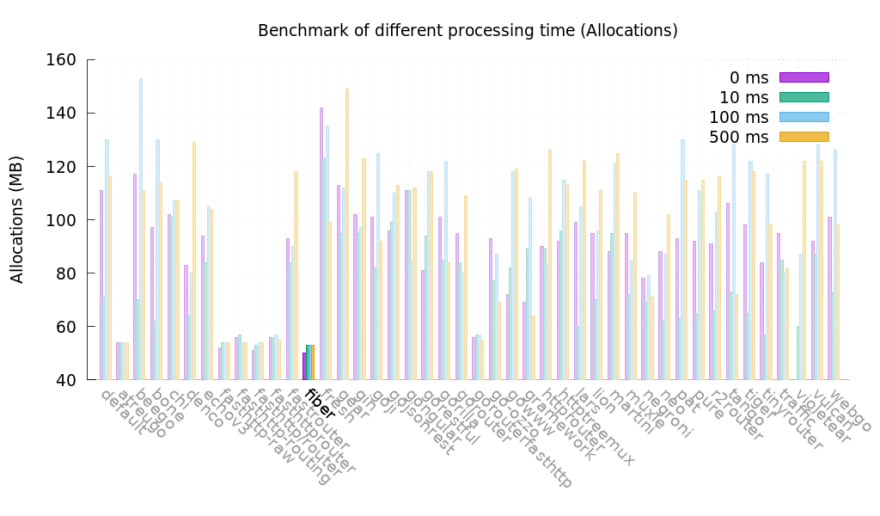 Make sure you have Go installed (download). Version 1.14 or higher is required.

Initialize your project by creating a folder and then running go mod init github.com/your/repo (learn more) inside the folder. Then install Fiber…

In the code above, we created a simple server and defined a handler, and when a GET request was made to the /test endpoint, we returned the "OK" response.

Here, unlike the previous code, we see a definition like ln := fasthttputil.NewInmemoryListener().

Next, we define a http.Client and give the Dial method of the ln variable we created to the DailContext method of the Transport object.

So does this remind you of anything? Yes, we mentioned above that we can give the net.Listener object to our http.Client variable and test it in-memory.
Fasthttp does exactly this approach with a utility package in the background.
Those who are curious about the details of the code can read it here.

fasthttp was design for some high performance edge cases. Unless your server/client needs to handle thousands of small to medium requests per seconds and needs a consistent low millisecond response time fasthttp might not be for you. For most cases net/http is much better as it's easier to use and can handle more cases. For most cases you won't even notice the performance difference.

Currently fasthttp is successfully used by VertaMedia in a production serving up to 200K rps from more than 1.5M concurrent keep-alive connections per physical server.

Switching from net/http to fasthttp

In short, fasthttp server is…

Now, let's write a test for an API that we developed with Go's own packages without using any external libraries.

Let's say we developed an API like above. So how do we test this?
We can write our tests by using the techniques we learned above here as well. Go language has a package called httptest which contains some utility methods. In this package, a method named NewUnstartedServer() returns us an unstarted test server object.

Let's take a look at the source code:

When we create a Server with the httptest.NewUnstartedServer() method, a Listener is created in the background that listens to a random port with the newLocalListener() internal method.

When we say start, it listens for connections from the listener in a goroutine with the s.goServe() method.
What comes to mind when we see Listener? As in Fasthttp, if we create an InMemoryListener and give it to our server, we can perform our test without listening a physical port.

In the above code, we run our server by actually listening to a physical port in the test named TestHttpServer. I put the time.Sleep to wait for the server to start. Using the srv.Listener.Addr().String() method, we can obtain the address (including the port randomly assigned by the OS) to which we need to request.

In the test called TestHttpServerInMemory, we performed the http server-client communication via an in-memory listener we created without listening to a physical port.
Here I used the fasthttputil.NewInMemoryListener method for convenience. If we want, we can do the same thing by creating a struct and implementing the Listener interface.
Let's take a quick look at it:

As we saw above, we can provide in-memory server-client communication by implementing the Listener interface ourselves and using the net.Pipe() method. The reason why I gave connection objects to our InMemListener struct over a channel is that the server calls the Accept() method in a loop and waits for a new connection. Thus, only if we give a connection to our Listener object, the Server side will receive a new connection.

So why isn't this in-memory server approach provided by default by Go?

In fact, there is a timely issue about it and there have been some people working on it, but the process has not been finalized yet. 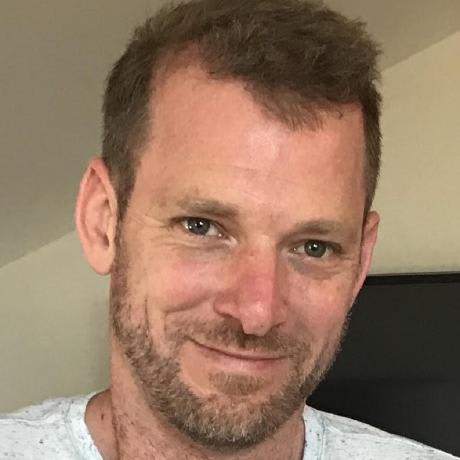 Look into making httptest.Server have a way to use in-memory networking (i.e. net.Pipe) instead of localhost TCP. Might be faster/cheaper and not hit ephemeral port issues under load?

Now let's see how we improved our own test performance using the methods I described above.
We developed our application with fasthttp and this application was acting as a basic reverse proxy. We also use some functionality provided by fasthttp for reverse proxy operation.

For our tests, we need a reverse proxy (our application) and a fake API to represent the server we are redirecting in the background. 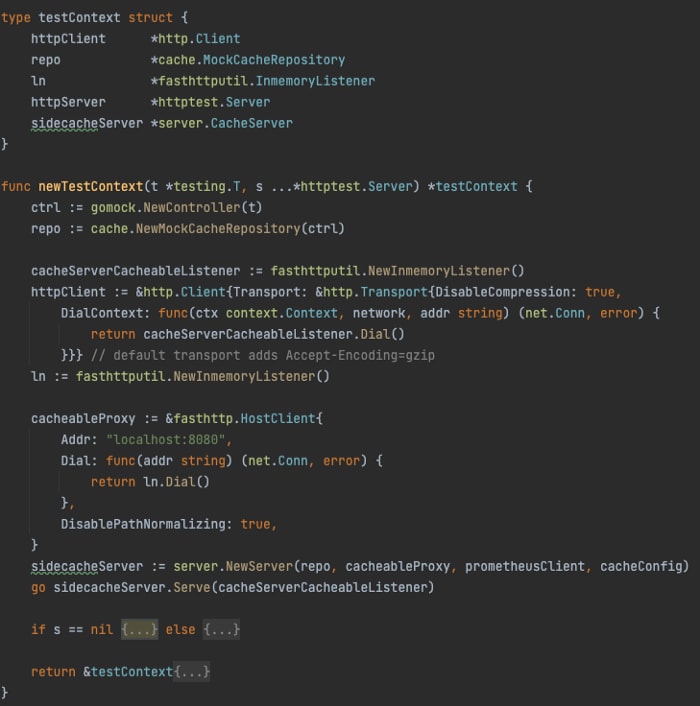 As a result of our development, after using the in-memory listener approach, all our tests were completed in ~0.3 seconds.

In the image below, we can see all our tests and total uptime. 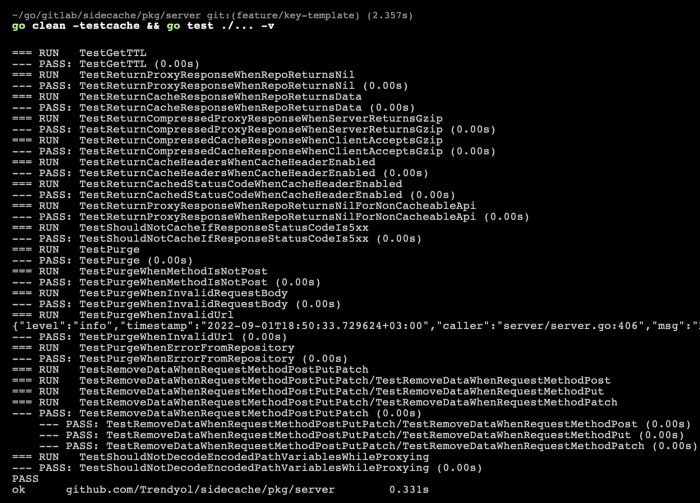 I hope this was a fun and informative article for you. See you in the next post :)

You can support me on Github: Support mstrYoda on Github

A management marriage between data and media

Once suspended, mstryoda will not be able to comment or publish posts until their suspension is removed.

Once unsuspended, mstryoda will be able to comment and publish posts again.

Once unpublished, all posts by mstryoda will become hidden and only accessible to themselves.

If mstryoda is not suspended, they can still re-publish their posts from their dashboard.

Once unpublished, this post will become invisible to the public and only accessible to Emre Savcı.

Thanks for keeping DEV Community 👩‍💻👨‍💻 safe. Here is what you can do to flag mstryoda:

Unflagging mstryoda will restore default visibility to their posts.