Architecture based on React Hooks and React FC design: 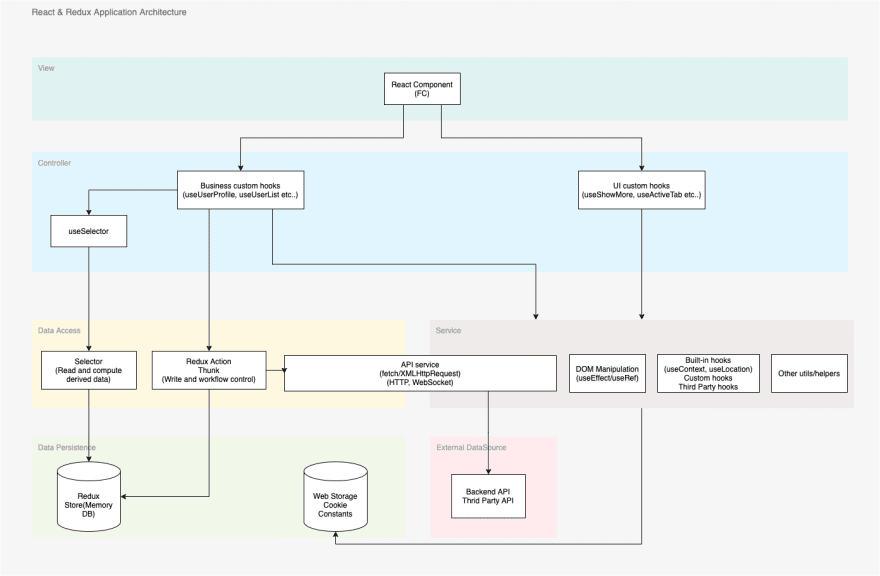 Use the createSelector method provided by the reselect library to create a selector as a method to access the redux store. selector can be used either by useSelector or in redux-thunk by xxxSelector(getState(). which is used to get a certain state slice on the redux store.
Another purpose of selector is to provide optimization for computing derived data. selector can compute derived data based on the component's props and state, Accessing React Props in Selectors, which can calculate derived data based on dynamic or non-dynamic arguments How do I create a selector that takes an argument?, the selector provides a memozie function that returns the result of the last calculation (equal references, equal values) with the same input, in conjunction with React.memo, useEffect's dependency list skips the effect and uses useMemo. If the dependency list uses the derived data returned by the selector, the memorized result can be created while the reference and value of the returned result remain unchanged, avoiding the component to render re-executes expensive logic, completes the rendering optimization of the component, and reduces unnecessary re-render.

A relatively broad category containing helper, utils, third-party libraries, generic custom hooks, third-party hooks, etc. dedicated to a specific task.
The main function is to interface to external data sources, backend API service, third-party APIs, websockets, etc. The communication protocol is mainly HTTP protocal, and the preprocessing of requests is done through interceptors. Pre-processing of requests, pre-processing of responses and error handling. No matter what external data source interface is called, the data structure of the output of the front-end API service should be fixed by a unified standard (pre-defined interface), for example, the output object contains three fields: {error: null, result: null, message: null}.
helper, utils store generic methods, do not care about and should not contain business logic, not to repeat.
The API service methods can be called in the controller layer hooks or in the async action creator created by redux thunk, not directly in the component view layer.

The main types of data stored are as follows.

The specific architecture is adjusted according to the requirements, and the separation of concerns is achieved through layering, partitioning, etc. Combined with componentization, modularization, high cohesion, low coupling, TDD to improve the quality of front-end code, improve readability, maintainability, scalability, reusability.

Building a client database of people in React