This article covers the node running from the source code or from the package in Ubuntu.

Little abstract before jumping in our journey with the Ethereum node.
Ethereum is a distributed decentralised network of computers. Each computer in this network is running a software that contains the history of the blockchain, the ability to validate/mine blocks and transactions.
In order to be a node in the Ethereum network, a client needs to download this software that implements the specification of the yellow paper to be able to communicate within the network.
In this article, the client I'll be choosing is Geth. It's the most popular client and backed by the Ethereum Community.

You can run a node on any computers but it's worth to consider running your Ethereum node in a dedicated hardware to minimise the performance issues.
Make sure to have a stable internet connection. Even though you can go offline, your node goes inactive until you come back and download the latest changes from other nodes automatically.
You can buy hardware from a vendor and have a plug and play node or you can build your own. The last option is cheaper and funnier.

In order to run your node, you need to be aware of the node types. Each node type consumes data differently. There are 3 node type:

Instead of downloading the entire blockchain, you can download a shallow copy of the data containing only the block headers. A light node relies on a full node to get more data. A light node can also verify the data and participate to the network. The drawback is that you cannot participate in a consensus, you cannot be a miner nor a validator.

The full node stores all block data not since the Genesis. This is periodically pruned and get only the most recent 128 blocks. A full node can:

The drawback is that you cannot query data at block #1,000,000 because you don't have the entire history. Only the 128 last blocks.

Why should I run a node?

If you really believe in Ethereum, and decentralised crypto currency, you should consider running a node.

You can use Ethereum privately and verify the data yourself. "Don't trust, verify" is a popular Blockchain mantra.

If you are on Windows and have Chocolatey installed, you can run (Admin mode) these commands:

(If you run these commands, you'll need to close your terminal and open up a new one)

Then you can follow one of these steps in order to have Geth installed:

In order to download the source code, you can copy and paste these commands:

You should have this output: 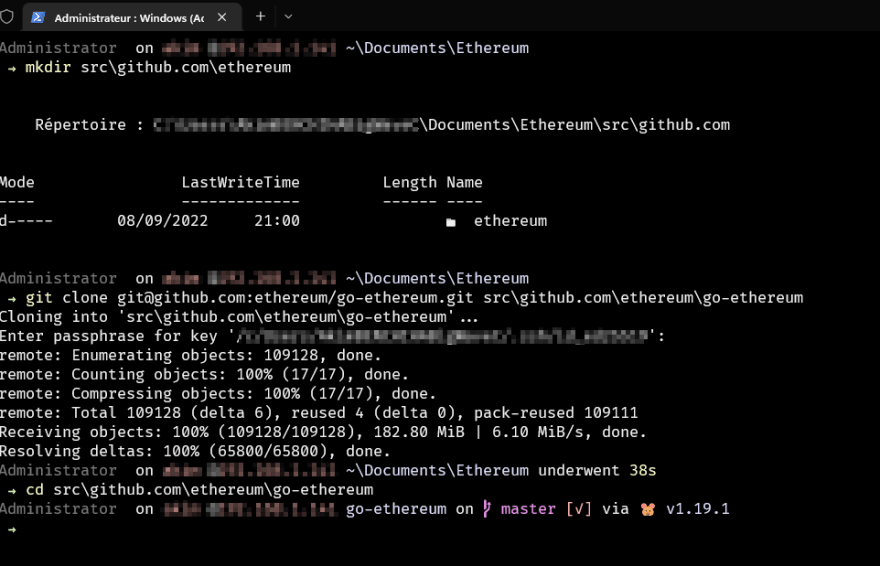 You can now build the project from the binaries 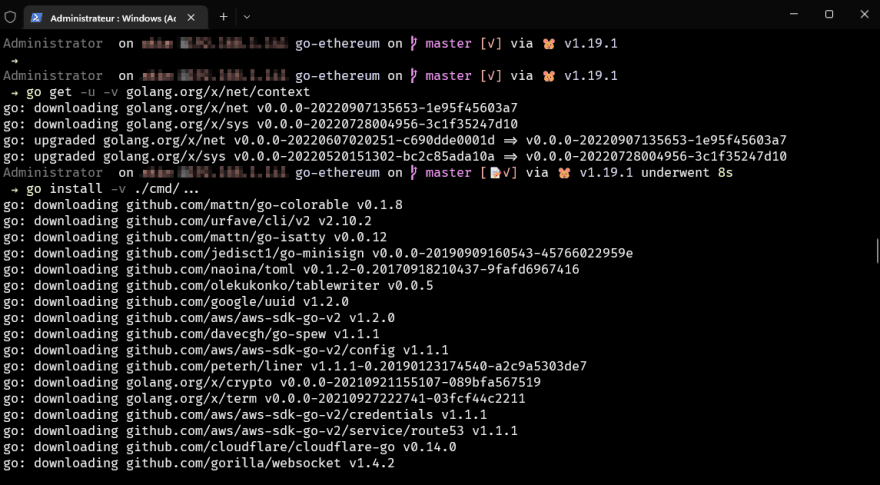 If you have Linux (or MacOS), it's slightly different. You can just run this command:

If you have an existing Geth client, you can update with this command

You need to add the launchpad repository

Then you can download the stable version of go-ethereum

If you have an existing geth installation, you can get the latest version with the following commands:

In order to store the chain data, you need to create a folder somewhere in your system. I usually create the chain data at the same level of the binary (in my case) 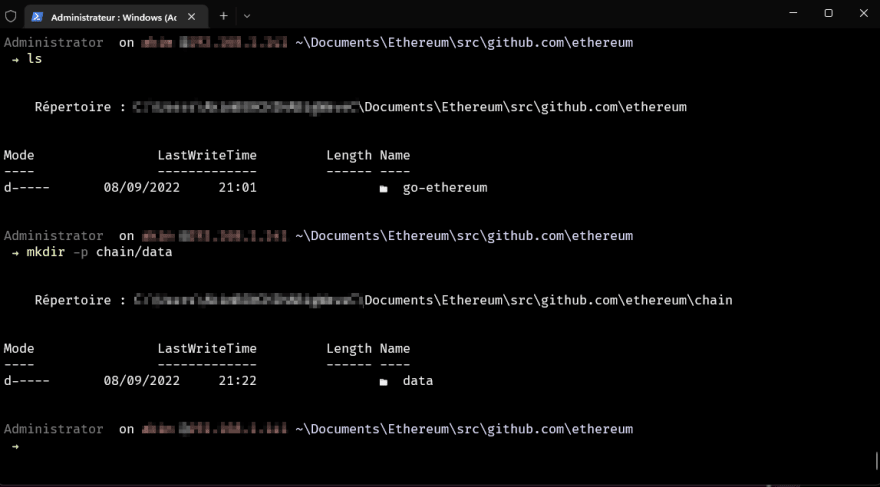 Now you are ready for running the node.

You can run a testnet node if you want to. You need to remove --networkid 1 and replace by --ropsten or --goerli or kiln or sepolia or rinkeby.

Run geth --help to see the full list of commands

Once you have executed this command, you should have this output 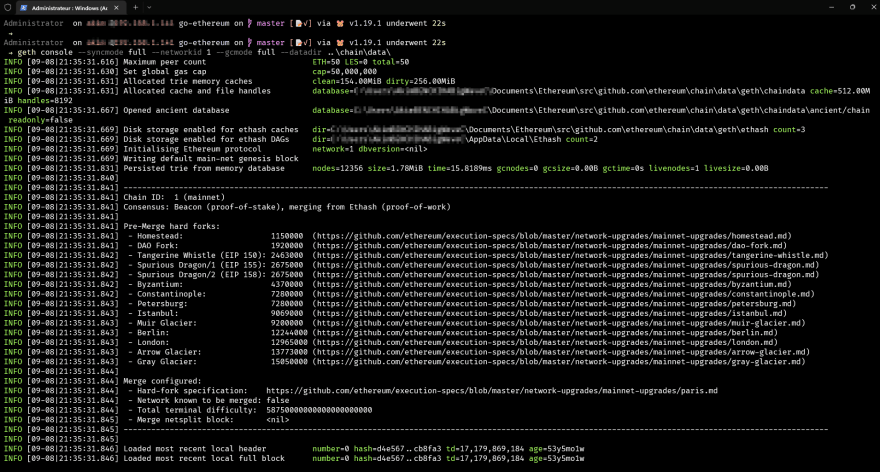 (It's running in foreground. As soon as you close the terminal or press Ctrl+C / Ctrl+D, it will shutdown the node). If you want to run a node in a foreground or using as a service in Ubuntu, there are a lot of documentation for you. This is not the purpose of this article.

You can see what is the current block being downloaded and the highest block by executing this command in the interactive console
eth.syncing

You can also execute Javascript code. In this example, I execute this snippet to know every 10 seconds the number of blocks per seconds being downloaded, the percentage of data downloaded and the remaining time

The number of block will be decreasing because over the year, there are more and more transaction in a block and you will be downloading more data in a full node in the last 128 blocks.

The purpose of this article is not to help you running in dev mode. So I won't detail too much.
If you want to contribute to the Ethereum client, you can run the command geth in dev mode without putting your assets at risk. There is a --dev flag that run geth in dev mode. In this way you have a node with:

For example, you can run this command:

(See the full help from the command geth --help)

The next step is to run the consensus layer in order to be able to participate in the network after the merge.
After that, we will be covering the setup of a private node.

Here you have just an overview on how to setup an Ethereum node. There are more to cover like:

Thank you for reading and have fun in the decentralised world :)

Once suspended, mousticke will not be able to comment or publish posts until their suspension is removed.

Once unsuspended, mousticke will be able to comment and publish posts again.

Once unpublished, all posts by mousticke will become hidden and only accessible to themselves.

If mousticke is not suspended, they can still re-publish their posts from their dashboard.

Once unpublished, this post will become invisible to the public and only accessible to Akim (mousticke.eth).

Thanks for keeping DEV Community 👩‍💻👨‍💻 safe. Here is what you can do to flag mousticke:

Unflagging mousticke will restore default visibility to their posts.