This is my third project for my Flatiron curriculum :D I got the inspiration for Ochoko from a wine app called Vivino, which allows you to look up wines and rate and keep track of the ones you've drunk. Ochoko is something similar, but for Japanese sake.

Living in Japan, there are tons of delicious sakes to drink and I wanted a way to keep track of my tasting notes. There are some Japanese apps out there but not exactly what I want and everything is in Japanese. On the other hand, English databases are incomplete and do not have data in Japanese when I need it (e.g. names of the sakes and breweries in Japanese). Besides a way to keep track of your own tasting notes, Ochoko inspires to be a comprehensive database of Japanese sake for bilinguals.

It is certainly far from perfect because there are still many things I am unable to implement skill-wise at this point, but I will continue to improve it as I learn more!

Ochoko is built with Ruby on Rails and follows the basic MVC pattern.

There are five models: User, TastingNote, Sake, Brewery, and Location which are connected through the following relationships: 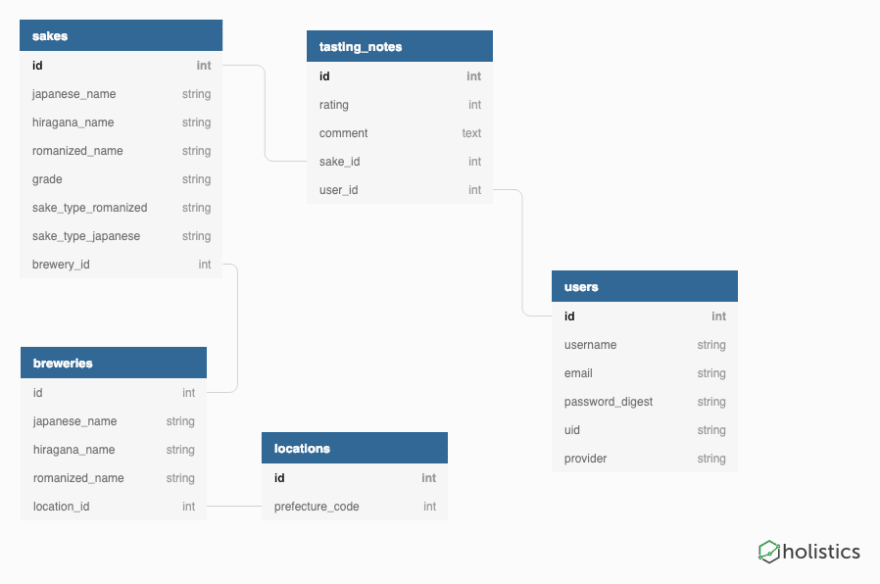 I used basic ActiveRecord validations for most things to require input of sake/brewery names, and user email, passwords, etc.

I also wanted to make sure that breweries wouldn't get duplicated but I imagined the possibility of breweries in different locations that have the same name. To allow for duplicate names as long as the breweries were in separate locations, I used a scope for location_id:

I had a hard time deciding how to handle the dual-language issue. I wanted the sake and brewery information to be available in both English and Japanese, but I wanted to keep a single sake as a single entity in the database instead of having duplicate English and Japanese versions. I decided to create two database columns for things like name (japanese_name and english_name, etc.). The downside to this was then I had to decide whether both languages were required or if someone could simply input the English name if they didn't know Japanese. If just one language was present, how would it show up for speakers of the other language, if at all? For now, I decided to keep both languages required (sorry non-bilinguals!), but I think there could be a better solution.

Sending params with link_to to prefill a form

Ochoko lets users add tasting notes for any registered sake in the app. In the Vivino app, users can take a photo of the wine bottle and the app will automatically figure out what wine you have and pull up the rating form. Well, I can't quite code anything like that yet, so users have to manually add tasting notes themselves.

In Ochoko's tasting note form, the sake is selected via a dropdown list. This list has the potential to be hundreds of entries long, making it difficult to find the correct sake. One solution is to let the user search for the sake and then add a tasting note for it directly from the sake's show page. However, simply adding a link to a new tasting note form will just bring up a completely blank form, forcing the user to find the sake from a list. Setting an instance variable won't work because data like this does not persist between HTTP requests.

Was there some way to send the data to form page and prefill the form with the correct sake?

Yes! A bit of research revealed that Rails' link_to helper lets you send parameters to the next page like so:

This creates a link with a query string attached to it:

The sake_id is now available in the params hash as params[:sake_id].

This by itself will not prefill anything in the form, so you need to modify the controller to check whether or not the param is present. In my case, I modified the new action in my TastingNotesController:

If the sake_id param has been set, that sake will be pre-selected in the tasting note form.

Setting up partials to use local variables allows you to use the partials across any controller view without needing to duplicate the code.

For example, I have simple partial that displays the details for a particular sake in a compact form. It is located in app/views/sakes/_details.html.erb. At first, it was coded something like this for use on the show page (some elements left out for clarity):

It was rendered with the following code on the show page:

This works fine if it's just used for the show page where @sake is set by @sake = Sake.find_by(id: params[:id] in the controller. Later, I realized I wanted to use the exact same erb on other pages, too, like a brewery page that lists all the available sakes for a particular brewery.

Try to do something like this and the code will break:

This code breaks because the brewery page is setting the sake variable through @breweries.sakes where each sake is assigned to sake in the each block.

Instead of making another partial for use on the brewery page, this problem can easily be solved by using locals. First, I refactored the partial to get rid of the @sake instance variable, renaming it to the more general sake instead:

Now the correct sake variable can be passed through the partial with the locals option. So, for the sake show page, it will be rendered like this:

I can even use it on the tasting note page, which also displays the sake details:

I ran into a few errors where I hadn't used validations to required certain fields like the grade for a sake. At one point, a new sake had been saved without the grade being filled out on the form. This caused the sake show page to break because I was trying to spit out the variable with <%= @sake.grade %> yet not checking whether it existed.

Note to self: Either check for the presence of variable input through non-required fields or use an ActiveRecord validation to require it, e.g. validates :grade, presence: true!

Todos for the Future

You can check out this project on Github or see the demo hosted on Heroku.

7 Udemy courses worth your time and money